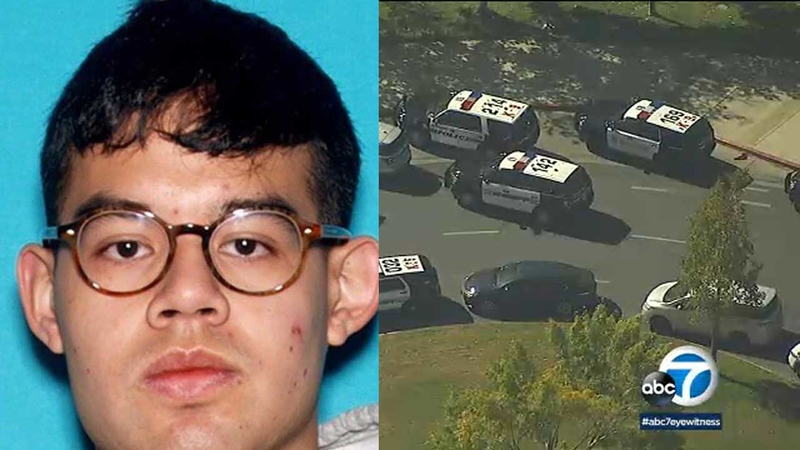 SAN JACINTO, Calif. (KABC) -- A 25-year-old man was arrested at Los Angeles International Airport on Wednesday hours after Mt. San Jacinto College and three other schools were placed on lockdown following reports that a man pointed a gun at fellow students on the college campus, officials said.

Greg Abejon, a student at the school, was taken into custody "after checking in at the airport in an attempt to flee the country," the Riverside County Sheriff's Department said in a statement. Authorities had also served search warrants at the suspect's home before apprehending him at the airport.

In an earlier tweet, the Sheriff's Department said it was notified about an armed man at Mt. San Jacinto College shortly before 9:30 a.m. Witnesses said a man walked into the campus cafeteria, approached a table, brandished a gun and pointed it at other students.

The gunman then exited the building. No injuries were reported.

"No shots were fired," an alert on the college's website said.

#SanJacinto
The suspect in today’s MSJC incident has been taken into custody at LAX. Suspect, 25-year-old Greg Abejon, was arrested after checking-in at the airport in an attempt to flee the country. No additional info at this time. Press Release pending. https://t.co/3h12a1GArS pic.twitter.com/8kL5dOmaBU

Some 500 students and staff were ordered to shelter in place at the college's San Jacinto campus as deputies conducted a search. The suspect was described as a man in his 20s or 30s, wearing a blue or gray sweater with a large emblem and a red bandanna.

"Anyone seen walking will be taken in by law enforcement," the alert on the website said.

"This is not an active shooter incident," the department said in a subsequent tweet.

Officials announced that all classes at all of the school's campuses were canceled until further notice out of an abundance of caution.

"I get a phone call from my daughter crying, she's panicking that there's a shooting going on, on campus," said Jaime Sanchez, whose daughter attends the college. "As a father, right away I panicked and gave her as much information as I could give her to protect herself.

"I rushed down here as fast as I could."

Students and faculty were released from Mt. San Jacinto College buildings as they were cleared by deputies.

All lockdowns were lifted as of 1:30 p.m., authorities said.