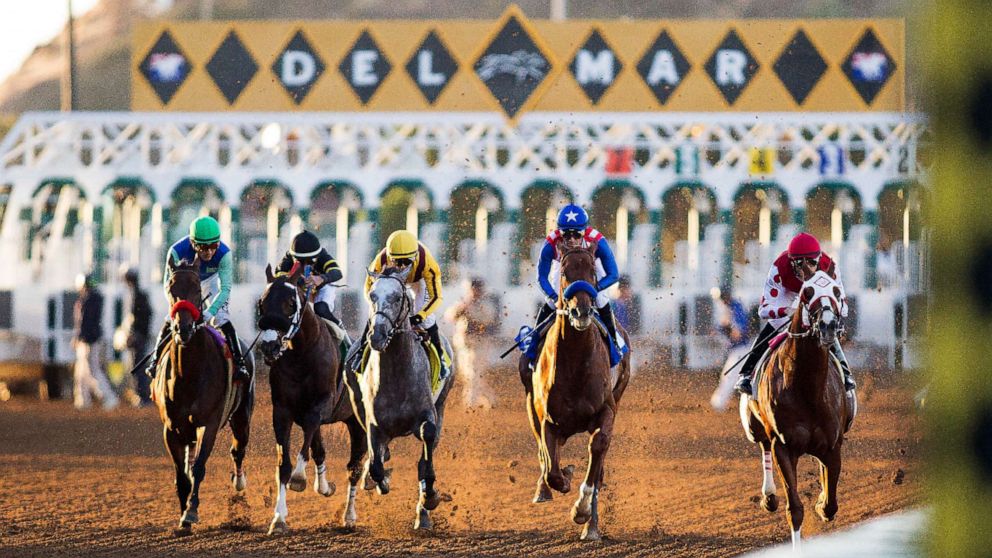 ABCNews
By JULIA JACOBO
Two horses died and another was injured in the same racing day at the Del Mar Thoroughbred Club in Southern California.

The first thoroughbred, Ghost Street, suffered a catastrophic injury to its left front sesamoid during the third race of the day on the turf course, according to the track. The horse was then "humanely euthanized."

Another thoroughbred, Prayer Warrior, was also euthanized after it was injured during the sixth race on the main track, according to the track, but the details of the injury were not released.

Zoe Metz, a member of the family that owned Prayer Warrior, wrote on Twitter that the horse was "loved by everyone."

"The barn will definitely not be the same without him," she wrote.

The horse that was injured, Princess Dorian, suffered an injury to her left front leg during the second race on the main track and was transported to the San Luis Rey Equine hospital for further care, according to the track.

The incidents happened within 90 minutes of each other, The San Diego Union-Tribune reported.

Before Sunday, which was Del Mar's third day of the fall meet, the track had not seen a single death in 2019, unlike 115 miles north in Santa Anita Park, where 37 horses died since December.

After the last death occurred during the Breeder's Cup, Sen. Dianne Feinstein (D-Calif.) called for increased transparency at racetracks to ensure the safety of horses, as well as for racing to be suspended at Santa Anita.

In a statement to ABC News, Humane Society CEO and President Kitty Block said the fatalities at Del Mar over the past weekend "underscore the urgent need for federal legislation to address serious regulatory shortcomings concerning race-day medication and transparency at the track and in the stable."

"Even its greatest supporters understand that reforms such as those embodied within the Horseracing Integrity Act are desperately needed," Block said. "This crucial bill will ban race day medication, substantially increase out-of-competition testing, and create a national and uniform set of medication policies. The deaths of many horses will be prevented by the bill's passage, and it will rid the sport of those who place winning above animal welfare. The unfortunate reality is these incidents are not isolated and will keep happening unless industry reforms and regulations are implemented and enforced."

Mac McBride, the director of media for the Del Mar Thoroughbred Club, said in a statement to ABC News that the track was ranked the "safest major racetrack 2018" and emphasized that its summer meet concluded with zero race-day fatalities.

"We believe Sunday's events were an anomaly for us based on our exemplary safety record," McBride said. "Del Mar will continue to work with our industry stakeholders to ensure the safest possible racing and training environment."