KGO
By Eric Thomas
ANTIOCH, Calif. -- Sixty-three-year-old Brian Martin, the owner of Delta Barbershop in Antioch, California, is out of surgery after he was hit and injured by a woman following a dispute over her son's haircut.

In an interview with KGO-TV, Martin says the young boy was squirming in the barber chair, which is normal for kids his age, but it didn't radically affect the haircut. But he says it was clear the mother was upset about something.

Antioch barber Dustin Souders describing the moment the shop owner - 63 year Brian Martin - was allegedly run over by a woman whose son had just received a haircut. pic.twitter.com/wLWKGPCDnz

"When she left, I know there was something different about her attitude." 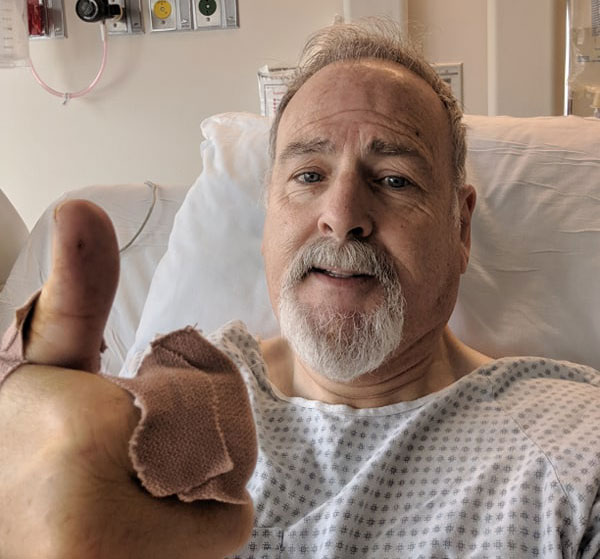 Brian Martin, 63, the owner of Delta Barbershop in Antioch, just out of surgery after he was hit and injured by a woman following a dispute over her son's haircut.

Martin says the woman came back about 20 minutes later and showed him a small scar on her son's neck.

Martin says she was angry and cursing and even began kicking the glass door of the shop-- with her two sons in tow.

"I finally had to ask her to leave," he says.

Martin says she took the boys out and they all got into her car. When he went out to take a picture of her license plate-- things got dangerous.

"And she's flipping me off and screaming f-u and she put the thing in drive and floored it," he said.

The impact knocked him through the glass window of a neighboring business, gave him a compound fracture of the right leg and cuts to his right hand.

The mom is identified as 28-year-old Ruby Delgadillo of Brentwood. She left the scene and has not yet been captured.

Police say the vehicle used in the assault was a 2006 Toyota Prius, blue, with California license plate 8LHB387.

Anyone with information on this case or on the whereabouts of Delgadillo is asked to call the Antioch Police Department non-emergency line at (925)778-2441. You may also text-a-tip to 274637 (CRIMES) using the keyword ANTIOCH.
Report a correction or typo
Related topics:
northern californiacar crashhit and runhaircrash
Copyright © 2020 KGO-TV. All Rights Reserved.
More Videos
From CNN Newsource affiliates
TOP STORIES