Lakers, Bucks square off on heels of rare losses 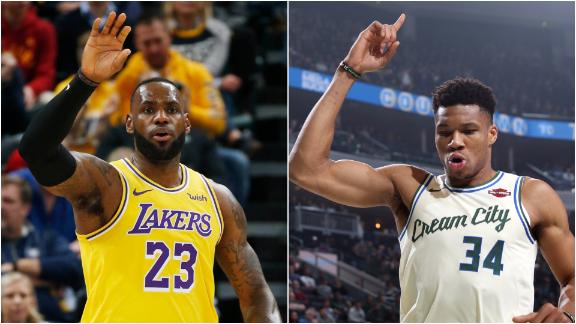 The top two teams in the NBA will get together for what can still be considered a potential NBA Finals preview, even if their recent top form was bumped off-track.

In a season during which, thus far, the Los Angeles Lakers and Milwaukee Bucks have rarely been sidetracked, they will both enter off of defeats when they clash Thursday night in Wisconsin.

The Lakers will conclude a five-game road swing that saw their 14-game winning streak away from home end Tuesday in a 105-102 loss to the Indiana Pacers. The Milwaukee Bucks said goodbye to their 18-game winning streak when they were stopped by the Dallas Mavericks 120-116 on Monday.

The sidebar to Thursday's attention-getting showdown is that one of these top teams, who enter with matching 24-4 records, will be stuck with consecutive defeats for the first time when it's finished.

"We just gotta keep on playing," the Bucks' Kyle Korver told reporters after the loss to the Mavericks. "It says something about our team that you've won a bunch of games in a row but we were still fighting for (Monday's game). We came up short, though."

Bucks star Giannis Antetokounmpo did all he could with 48 points and 14 rebounds against the Mavericks in Milwaukee's first defeat since Nov. 8 to the Utah Jazz.

The reigning NBA MVP was 18 of 31 from the field and 11 of 16 from the free-throw line, but just 1 of 6 from 3-point range. He leads the Bucks with 31.7 points and 12.8 rebounds per game and appears to be playing even better than last season.

"My dad and my brother always say this: 'To excel, to be better, you've got to face adversity,'" Antetokounmpo said afterward, according to the Milwaukee Journal-Sentinel. "It starts from the team leader to the last player. We got to see what we did wrong. I've got to step it up defensively, play better defense -- way, way better defense -- to help my team. It's good. At the end of the day it's good. You get better."

The Lakers can take some solace in the fact that their defeat to the Pacers came with star forward Anthony Davis as an onlooker because of a mild right ankle sprain. He is likely to play Thursday.

Without Davis, the Lakers were missing 27.4 points and 9.3 rebounds per game, both tops on the team. The Lakers received 20 points and nine rebounds from LeBron James, but the four-time MVP missed a would-be go-ahead 3-pointer with 11 seconds remaining and the Pacers sealed the victory.

While the Bucks will be without guard Eric Bledsoe (leg), the Lakers are expected to be without forward Kyle Kuzma (ankle).

Once Thursday night's game is complete, the teams won't be able to test themselves against each other until March 6 at Los Angeles.

Lakers, Bucks looking to avoid losing streaks in star-studded battle
The Lakers and Bucks enter tied with the NBA's best record, but only one can exit with that distinction after they face off on Thursday.
Report a correction or typo
Related topics:
sportsespnmilwaukee bucksnbalos angeles lakers
Copyright © 2020 ESPN Internet Ventures. All rights reserved.
More Videos
From CNN Newsource affiliates
TOP STORIES