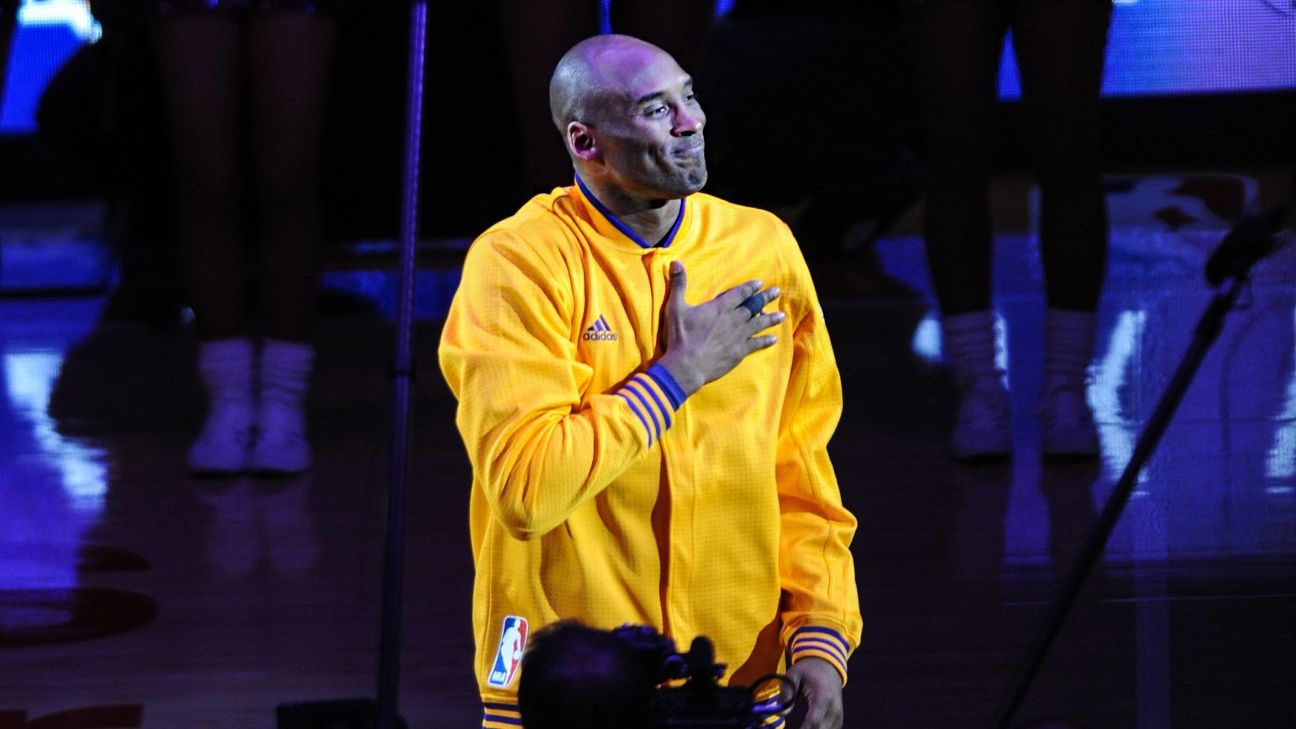 ESPN
By Ramona Shelburne
I wanted to go last. To let everyone else write their stories on Kobe Bryant as he approached retirement and then top them all.

It was an audacious gamble. But that was my pitch to him in the winter of 2016. I thought the audacity would appeal to him. He'd admire the confidence, the swagger, maybe even chuckle at the arrogance.

He said he'd do a story with me about his life, but not out of vanity -- mine or his.

"I'm not interested in self-serving pieces," he said bluntly. "It has to be something where an athlete reads it and is inspired by something, learns something and pushes themselves."

That was what he cared about as his basketball career came to an end: passing on what he had learned, what it really took to be Kobe Bryant. Not to be understood, because that was impossible with a soul as ruthless and relentless as his, but to inspire.

It's all I can think about now as I grieve his death from a helicopter crash in Calabasas, California, Sunday morning that killed him and eight others, including his daughter Gianna.

"I enjoy passing things on," he told me in 2016. "Some people want to take it with them to the grave. Like 'Lord of the Rings.' The world is filled with a lot of Smeagols [who] can't let go of the damn ring."

Kobe Bryant let go of the damn ring when he retired. He ceded basketball and its stage to future generations. But he never stopped trying to inspire.

He wrote books, screenplays, podcasts, short stories, poems. The words poured out of him. I remember telling him once to take a rest, enjoy his retirement a little. Slow down.

No way, he said, laughing.

He reached out to athletes across all sports. He cold-called writers like J.K. Rowling, wanting to talk storytelling. Business leaders, actors, musicians, directors. And he didn't just call them. He called them every day, sometimes three times a day. Hounded them. Just trying to understand what made them great and absorb whatever knowledge or inspiration they would give to him.

In a way, it was audacious of him to think he could glean enough in a few calls with these masters of the universe to master their crafts himself one day.

He didn't just have an iron will or unyielding confidence in himself. He believed he could bend the universe to his will.

And damn it, he often did.

That's what he meant when he would tell people to "live mythically" or write on someone's sneakers "Be Legendary."

That's the core of what he called the Mamba Mentality. And it's what will survive him in death.

There are images that capture that mentality. The two free throws he took after tearing his left Achilles tendon in 2013. The jaw jutting out defiantly after a big shot. The fist pump. We'll watch those images again and again now.

But you can't capture a spirit like Kobe's. And you sure as hell can't replace it.

Which is why his loss has been felt so deeply around the world.

What we have now, what we have left, are all the ways he reached back out to us.

There's a whole generation of athletes, writers, musicians, artists, actors, businesspeople and fans who felt like they were just a text or a tweet away from him.And when he saw something special in someone who reached out to him, he tried to answer.

"People who I know are passionate about what they do," he explained. "I just like seeing them do great things. That's what I enjoy."

Sometimes it was just a line or an emoji. But it seemed he could tell when someone needed to hear from him and what they needed to hear.

When I was pregnant with my son a few years ago, Kobe made a point of reaching out to see how it was going. He made me promise to let him know when the baby was on his way, and 38 hours into a difficult labor that ended in an emergency C-section, I got this text from him:

"You are bringing God's greatest blessings into the world. You have been blessed to give birth, a gift some cannot have. Women are walking miracles."

I was in a very rough place. Exhausted. Scared. I had a ton of support with me at the hospital and via calls and texts from friends and family. And yet that message hit me deeply.

Focus on the blessing, not the pain or the fear.

As the world grieves his loss, we'll hear hundreds, maybe thousands, of stories from people Kobe touched like that. People who knew him a little, or a lot. People he didn't know at all but simply reached out to because he thought he could help or inspire them.

Los Angeles Sparks star Candace Parker heard from Kobe before Game 5 of the 2016 WNBA Finals. She'd won at every level except the WNBA, and her failure to do so was becoming a defining characteristic.

Kobe called and asked her, "What are you afraid of?" Parker recalled. "You're either going to lose scared, or you're going to win. It's that simple."

Parker played one of the best games of her life in that Game 5 as the Sparks beat the Minnesota Lynx to win the championship.

She reflected on that call Sunday night. I told her that I would've reached out to him after something as awful and monumental as this.

"We know what he would say," Parker said. "It was just better when he said it."

The thing is, I don't know what he would say about this tragedy.

About his death, his daughter's death, the deaths of seven other people who boarded that helicopter in Orange County and headed to the Mamba Sports Academy in Newbury Park.

This was a man who lived dangerously, sublimating his fears into some deep, dark place, then reconstituting them into a relentless drive. He rode motorcycles and helicopters and pushed his body beyond normal human limits of pain tolerance, fatigue and endurance.

He wasn't fearless. He had fears like everyone else. He just learned how to will himself past fear. Or maybe just how to scoff at it.

"To a certain extent, every day I was vulnerable," he told me once. "You're always dealing with fear, with something in your imagination. Something that you think can happen.

I don't know what he thought about death or an afterlife. I never asked him that. But I know he contemplated it deeply.

During his recovery from his torn Achilles tendon, he became obsessed with the legend of Achilles, the warrior from Greek mythology who chose a short life that would be remembered for eternity over a long life of little consequence.

Kobe wasn't given that choice by the gods, that we know of.

But he lived his life like it could end at any moment. Passionately, purposefully, painfully.

"You have to understand the fact that we're human," he said. "We all say s--- that we shouldn't say, we all do things we shouldn't do. We all are angels, we are all devils.

When we did that last story together, on his basketball death, I told him I was going to push him: on uncomfortable things like the fractured relationship with his parents, his 2003 sexual assault case in Colorado, being called "uncoachable" by Phil Jackson and selfish by teammates, rivals and business partners.

On what it really took to lead the life he led, the personal and professional mistakes he made in pursuit of basketball immortality.

At points it felt like he was egging me on. Push harder, further. Make him uncomfortable. Our interviews were competitive and combative. Like a game of one-on-one.

I told him I wasn't buying that he was OK going out on a 17-win Lakers team. The Kobe Bryant I'd covered all these years would be raging at all this losing, not waving like some guy on a Rose Parade float as he said goodbye to fans across the NBA.

He never conceded the point.

"It's simple," he wrote late on the night of Feb. 6, 2016. "I adjust to the reality of the situation. Accept it. Be aware of the rage and accept it while focusing on having the mind for this challenge which entails patience, teaching and understanding. Different challenges call for different approaches.

"This isn't a death to me so much as it is an evolution, a transformation, or as Joseph Campbell would say, 'the new normal.'"

We talked often that year about Joseph Campbell and "The Hero's Journey." Kobe had read it cover to cover. Studied it deeply as both the author of his own legend throughout his 20-year career and the future author of what he hoped would be a second career as a legendary storyteller.

I told him I wasn't buying his lack of nostalgia or nerves as his final game approached. He wouldn't concede that point either.

"I wasn't at home stewing and thinking and mulling over the game," he shrugged. "I was already working towards the future. Then it was about doing it one last time, as best as I can."

The morning after he played his last game, an audacious, legendary 60-point performance no one who witnessed it live will ever forget, he got up early and went to church.

"I think after 20 years, I think it's important to give thanks for having such a blessed life," he said. "I wanted to make sure I went and paid my respects and just said 'Thank you.'"

I thought about that on Sunday as I went to the hillside where Kobe's helicopter crashed. Thousands of fans had driven out to bear witness, to grieve, to celebrate his life and legacy. Or maybe just to see with their own eyes what still seems so unbelievable.

Memorials sprung up outside of the Mamba Sports Academy, to where the helicopter had been heading. Outside of Staples Center, where he'd played his final game and had both of his jerseys retired. Outside the Lakers training facility. Buildings across the country were lit up in purple and gold lights.

On the day basketball's greatest storyteller died, the people he inspired were left trying to write his ending. 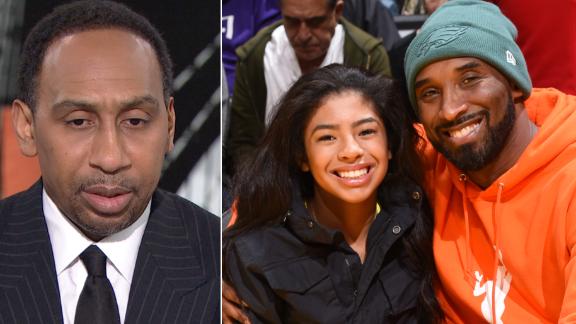 Stephen A.: Kobe was incredibly content with post-NBA life
Stephen A. Smith describes Kobe Bryant as "unquestionably brilliant in so many ways" because of all of Bryant's aspirations following his illustrious NBA career. 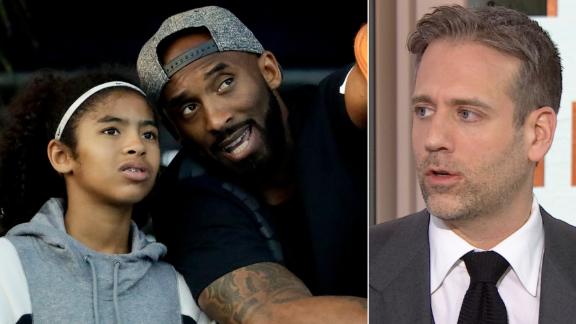 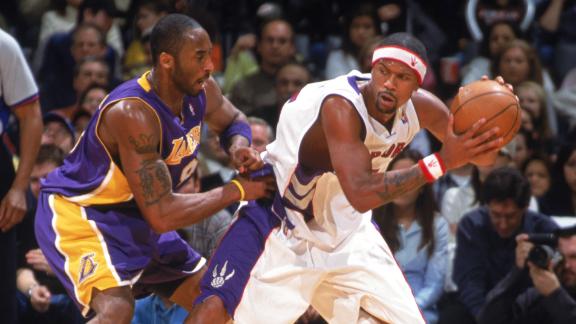