5-on-5: Can LeBron catch Giannis for MVP? 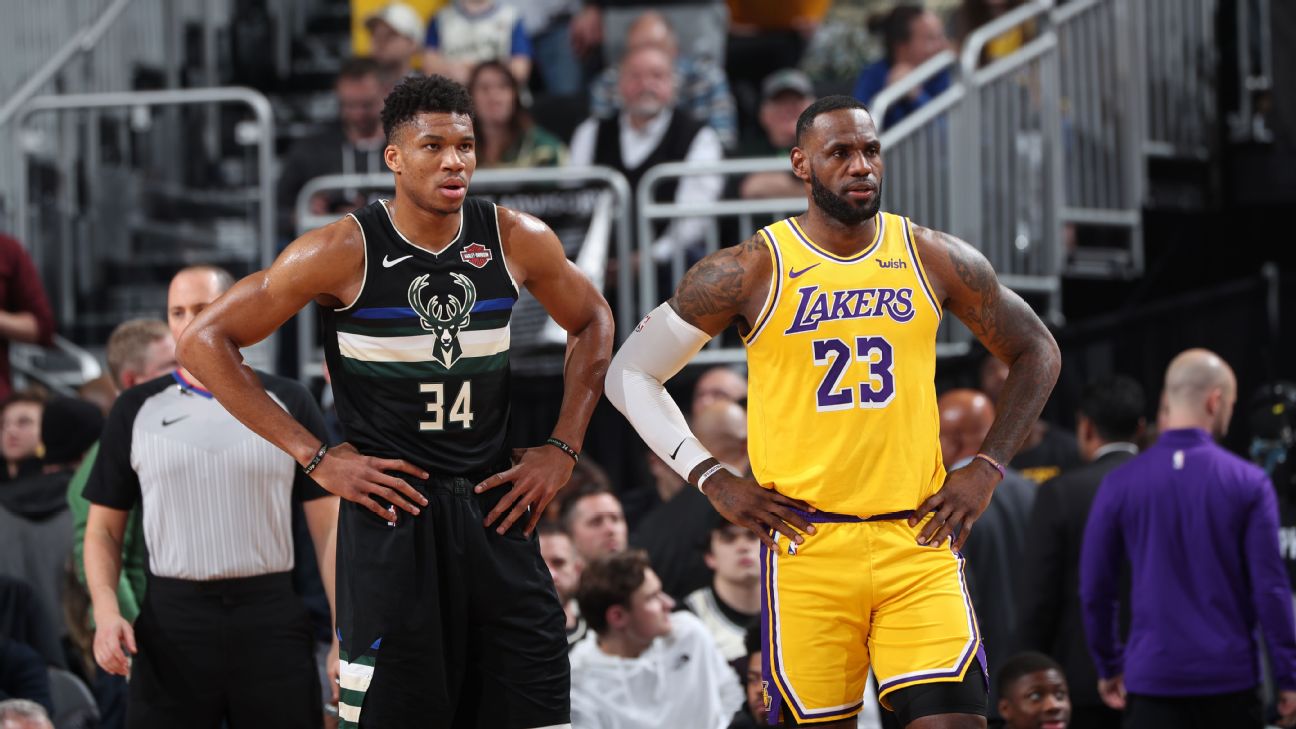 Reigning MVP Giannis Antetokounmpo helped the Milwaukee Bucks clinch the earliest NBA playoff berth in 15 seasons on Sunday. Meanwhile, LeBron James has the Los Angeles Lakers at the top of the Western Conference, but is that enough to stop Antetokounmpo from repeating as MVP?

Will Zion Williamson make an All-NBA team before Ja Morant? Who will win Defensive Player of the Year? Which coaching performance has stood out this season?

Our experts answer the big questions and make their bold predictions about the NBA awards races.

1. What would LeBron or another contender have to do to catch Giannis for MVP?

Bobby Marks: Petition the league to change the MVP criteria to factor in the playoffs. Because, in all seriousness, even a late-season injury to Antetokounmpo would not shift this race.

Jackie MacMullan: Don't close the curtain on James just yet. He continues to fuel this debate by averaging a career-high (and league-leading) 10.6 assists, committing to the defensive end of the floor and exhibiting consistent positive leadership -- a stark contrast to last season's petulant behavior, an unseemly blemish on his Hall of Fame career.

General managers often tell me ESPN's real plus-minus has true value when measuring players. James leads the league by a wide margin at 10.24.

Royce Young: At this point, Antetokounmpo has such a running start that it's going to be nearly impossible to close the gap. The Bucks are on track for 70 wins and a historic net rating, while Antetokounmpo is producing nonsensical numbers, while also sitting most fourth quarters.

Kirk Goldsberry: James needs to convince voters he's taking a lesser roster to the top seed in a tougher conference. Each team's net rating with its superstars on and off the floor are his Exhibit A:

Both players are clearly making their teams better, but the Bucks are still really good when Antetokounmpo is on the bench. The same cannot be said for the Lakers, who look like a lottery team when James is on the bench.

Kevin Pelton: Come up with a better story. Reigning MVP on a team posting one of the best regular seasons in NBA history is going to be difficult to beat. I think it would take something along the lines of a 20-game winning streak for a contending team, or a historic individual stretch (repeated triple-doubles for James or a scoring spree surpassing what we saw earlier this season from James Harden).

2. Fact or fiction: The best defensive player will win Defensive Player of the Year.

MacMullan: Fiction, because measuring defense effectively remains the last great frontier in analytics. In the case of measuring superb defense, the numbers do lie. Even the eye test often fails -- a dogged on-the-ball defender, harassing the ball handler up the floor in plain sight, could well be a liability on the weak side if he is unable or unwilling to rotate or help in a timely fashion. There are too many nuances for a voting body to land on the same page on this award.

Pelton: I'm not sure I would say there is a single best defensive player, given the difficulty in separating out how much of a role individuals play in their teams' defensive success from scheme and interaction with their teammates, so I guess that means my answer is fiction? (But also maybe it just means whoever wins Defensive Player of the Year is probably a reasonable choice.)

Marks: Fact. Antetokounmpo should be the deserved favorite for both MVP and DPOY. Milwaukee has the league's best defense, with an absurd 97.2 rating when Antetokounmpo is on the floor. There are strong arguments for other contenders, but this one belongs to the front-runner.

Young: Fiction. Rudy Gobert remains the most impactful defensive player in the NBA, but it's unlikely he'll make it a three-peat considering the Jazz's struggles, particularly on defense. Whether it's Antetokounmpo, Anthony Davis, Joel Embiid or someone else (it's not you, Hassan Whiteside; you can't be 27th in defensive rating and win DPOY), it's hard to definitively say anyone has eclipsed Gobert as a defender.

3. Which rookie will make an All-NBA team first?

Pelton: Zion Williamson. Whether he wins Rookie of the Year or not, Williamson has been the best-performing rookie this season since he returned to the court, and I don't think it's particularly close. Add in the typically slower development path for point guards like Ja Morant and I'd make Williamson a heavy favorite here.

Marks: Williamson. Morant will face stiff competition at the guard position in the future, especially with Stephen Curry and Klay Thompson returning to full strength next season. Despite Williamson playing 88% of his possessions at power forward, per Cleaning The Glass, starting center Derrick Favors could leave in free agency and open the door for Williamson to shift to center next season. That would help Williamson's case.

Young: Williamson. With the historic start he's off to, it's reasonable to wonder if he would've made it this year had he not been injured to begin the season. Morant is going to make All-NBA teams in the future, but Williamson is already at another statistical level.

MacMullan: I'm calling it a tie. That's how bullish I am on both Morant and Williamson, who have each shown the temerity, the talent and the fearlessness to excel in a league that is often overwhelming and humbling for young players. Both have put in the time and have not shrunk from big moments. The one question that remains is this nagging feeling among league observers that Williamson will have to shed some weight to continue to excel, or risk injury.

Goldsberry: Williamson. I love Morant, but I think Williamson's path to All-NBA is easier. These days, there are fewer All-NBA candidates in the frontcourt than there are in the backcourt, and Williamson is already one of the top-scoring bigs in the NBA. Still, both will be perennial All-NBA guys by 2023 -- maybe even sooner than that.

4. Who has had the most impressive coaching performance this season?

MacMullan: Raise your hand if you ever imagined that the Toronto Raptors would be sitting in second place in the Eastern Conference without Kawhi Leonard while managing a revolving door of injuries. No worries. The Raptors keep on winning with their innovative young coach, Nick Nurse, at the helm. I recently asked budding Celtics star Jayson Tatum who the toughest guy was for him to score against and he answered, "The Toronto Raptors team. Those guys are always doing something different to try and stop me.''

Goldsberry: Billy Donovan edges out Nurse for me. The Oklahoma City Thunder weren't supposed to be this good. I think they are transforming from a Cinderella story into a matchup nightmare for anyone in the first round of the playoffs. Who wants to see Chris Paul, Shai Gilgeous-Alexander, Danilo Gallinari and Steven Adams? Who wants to try to win games in OKC? Nobody, that's who -- and Donovan deserves tons of credit for getting this group to coalesce.

Marks: You can make a legitimate argument that the current group of head coaches is the strongest the NBA has seen in a long time, but Nurse and Donovan stand out the most to me. They've both exceeded expectations in incredible ways.

Pelton: Mike Budenholzer. Beside their consistency, what's impressed me most this season is how well the Bucks have played without Antetokounmpo on the court. Their plus-6.0 net rating without the MVP favorite would rank fourth in the league. That's testament to Budenholzer's system putting role players in a position to shine.

Young: Nurse, with Donovan a close second. Both have had to adjust to star departure(s), but in different ways. Nurse reverse-engineered a championship roster to elevate Pascal Siakam into the role of the go-to star while continuing to maximize the depth around him. Donovan has the Thunder in playoff contention after the shocking trades of Paul George and Russell Westbrook handed him a jumbled roster.

5. What is your bold awards prediction?

Marks: Bradley Beal finds redemption and is named to the All-NBA team. That might not make up for missing out on All-Star status, but earning All-NBA honors carries more weight than playing in an exhibition game.

MacMullan: No one has ever won back-to-back Most Improved Player awards, but this is the season it should happen. Siakam's meteoric rise to NBA stardom has continued in Year 4, and this time he made the biggest leap of all -- from up-and-coming young talent to legitimate All-Star. He is posting career highs in everything from points per game to free throw shooting (80.6%). I spent a couple of days with Siakam during his rookie season and ducked for cover every time he attempted a 3-pointer. This season, he hits them at a 37.3% clip.

Young: Chris Paul will make his first All-NBA team since 2016. Paul was a surprise All-Star, reigniting his career and rediscovering his Point God identity. He has quietly become one of the most important players to his team, altering the fabric and style of a roster, leading a locker room and picking the right spots every game to assert himself. Paul was far from being considered a top-25 player last season, but are there 24 other guys you'd want on your team right now to win a game?

Goldsberry: LeBron James will win the MVP. The Lakers have a ton of home games left, as well as a bunch of national TV appearances. At 35, James will not only lead the Lakers to the No. 1 seed out West, but he'll do so under the brightest lights in the NBA. As a result, voters will be compelled to give the king his fifth MVP.

Pelton: I think Zion Williamson will end up winning Rookie of the Year. Is that still bold? 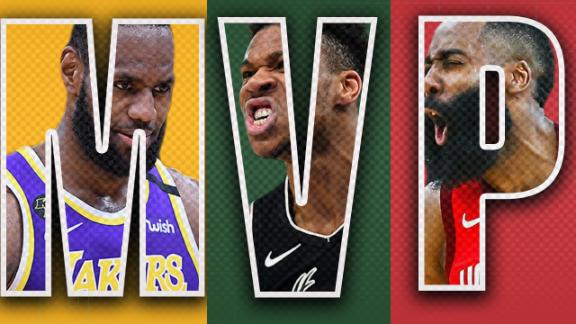 The King. The Freak. The Beard. An MVP will rise. Check out these highlights
Here are the best plays from LeBron James, Giannis Antetokounmpo, James Harden and the MVP field as we head down the stretch run of the NBA season. 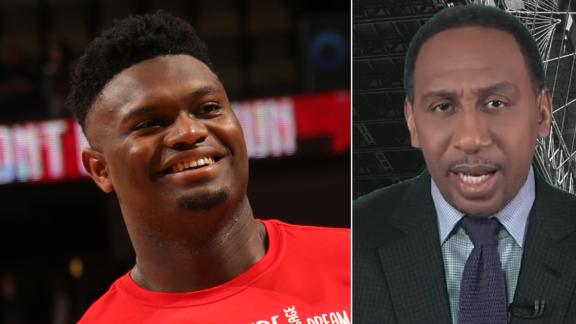