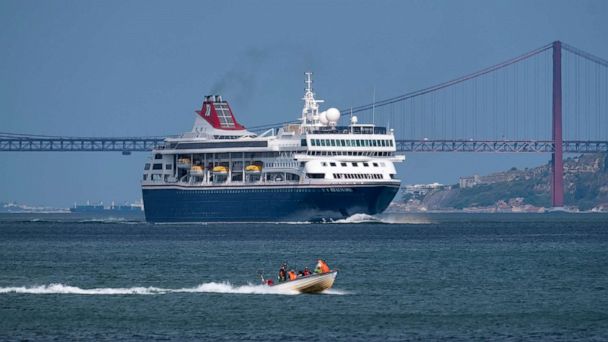 Weeks after a cruise ship was blocked from disembarking at several ports in the Caribbean, due to fears of passengers with possible COVID-19 symptoms, Cuban officials are welcoming the vessel to dock and get their guests home.

When the Braemar cruise ship was first turned away by the Romana cruise port in the Dominican Republic on Feb. 27, the cruise line said in a press release that their decision was an "overreaction" due to a "very small" number of people with symptoms on board that they insisted were not consistent with COVID-19.

At the time, the ship was carrying 1,128 passengers mostly from the United Kingdom and 384 crew members, officials said.

A couple days later on March 1, the ship, which belongs to the British company Fred Olsen Cruise Lines, was allowed to dock in Sint Maarten and some passengers were chartered home to the United Kingdom from there.

Afterwards, more passengers were picked up from the Dominican Republic to journey to other ports in the Caribbean.

But then on March 9, the company confirmed that some passengers, who were flown home from Sint Maarten had tested positive for COVID-19 after returning home. Even worse, they were not among those who were showing symptoms while on board a week prior.

That same day, the cruise line announced that "there are five people on board who are currently isolated as they have presented at our Medical Centre with influenza-like symptoms. As a precaution, we are making arrangements to have these crew members tested for COVID-19 Coronavirus when we arrive at the next port of call of Willemstad, Curaao."

The ship was allowed to dock in Curacao the next day so the individuals could be tested, but nooner was allowed off the ship. Tests for one passenger and five crew members including a doctor came back positive for coronavirus.

The infected individuals remained in isolation on board and the ship headed to its final port in Barbados on March 12, but local officials there expressed their concerns and the ship had to change course for the Bahamas -- it's flag state.

The next day, however, Bahamian authorities denied letting anyone off, but allowed the ship to dock to take on food, fuel, and medicine.

The ship sat in the water for days without a solution with 682 passengers and 381 crew members.

Meanwhile, the headcount of passengers and crew members showing symptoms of illness and not tested for COVID-19 escalated to 47.

Finally, on Monday, Cuba said it would let the ship dock at the Mariel Port so passengers could be taken off and fly back home on four chartered flights to the United Kingdom on Wednesday, officials said.

Cuba says this was in response to a request from the United Kingdom's government due to the urgent situation on board and that health protocols will be in place to receive them.

"We are working around the clock to arrange evacuation flights from Cuba to the UK as soon as possible for passengers on the Braemar cruise ship," a spokeswoman with the Foreign and Commonwealth Office said.