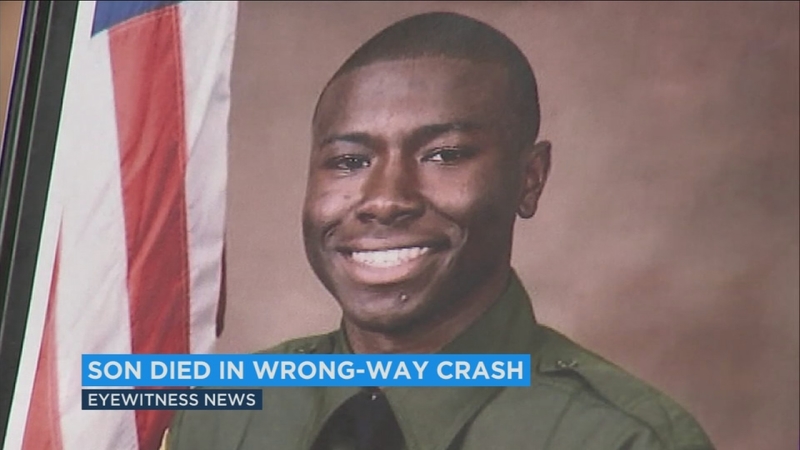 COMPTON, Calif. (KABC) -- This holiday season, a Los Angeles County sheriff's deputy has a warning for everyone, as she plans her son's funeral.

Anthony Thompson was killed by a suspected drunk driver, who also died in the wrong-way crash on the 605 Freeway in Baldwin Park.

The 24-year-old was hoping to follow in his mother's footsteps and become a sheriff's deputy.

Now his mother has a message for the public, and for the family of the woman who was driving the other car.

"I have to be strong and I have to understand that he's no longer here and I'll see him again," said his mother, Ottawa Dunkentell.

She says she has a strong faith in God and a strong belief in forgiveness and she refuses to be angry or blame anyone for her son's death.

"We want to tell her parents that we love her, we love them, she's grieving just like we are. She's a mother just like I am."

She also hopes to take action to prevent something like this from happening again. She's hoping to work with someone on road-safety improvements that could perhaps stop wrong-way drivers from entering a freeway, such as something that would flatten a tire of a vehicle heading in the wrong direction.

She also hopes to start a foundation in her son's name.

Anthony was known for his big smile and, like his mother, had a strong faith.

He worked as a custody assistant for the Los Angeles County Sheriff's Department as he aspired to become a deputy.

Friends say he loved his job and even the inmates mourned his death.

His mother worked up to the courage to talk about her loss, in the hopes of saving someone else's life.