KABC
LOS ANGELES (KABC) -- The testing phase of new parking signs began Friday in an attempt to make it easier for drivers in Los Angeles to figure out when and where they can park.

Many Angelenos say the current parking signs are difficult to read, which leads to a lot of confusion and ultimately very expensive tickets.

On Friday, about 100 of the new signs were installed in the Historic Corridor in downtown Los Angeles along Spring and Main streets between Second and Ninth streets.

City officials chose the area because it tends to be a very complex region when it comes to parking restrictions. State law, however, mandates the old signs be kept in place, creating signposts with a lot of signs.

"It's especially not fair when we as a city write expensive parking tickets for people, who sometimes in good faith, thought it was OK to park there, but they just couldn't figure it out because of the conflicting parking signs," Los Angeles City Councilman Paul Krekorian said.

Krekorian said results from the pilot program will help tweak the signs and filter out any bugs.

"So when we roll it out citywide, it's really been vetted by people who are actually using this information when they're trying to park their cars." Krekorian said.

If the six-month test phase goes well, the program could be expanded to other areas as well. The signs are set to be unveiled during a news conference scheduled for 1 p.m.
Related topics:
downtown lalos angelesparking
Copyright © 2020 KABC-TV. All Rights Reserved.
RELATED 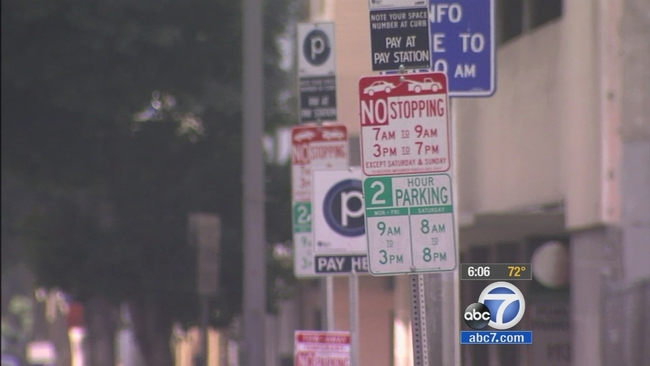