TV and film production has been largely put on hold to avoid breaching social distancing requirements but Gov. Newsom says new guidelines are coming soon. Here's what may look different.
KGO
By Jory Rand and Alix Martichoux
SAN FRANCISCO -- Gov. Gavin Newsom held a virtual roundtable discussion with members of the television and film industries Wednesday as part of his "Economic Recovery and Reinvention Listening Tour."

The hourlong discussion was described as an opportunity for leaders in the TV and film industries to share how they've been impacted by the coronavirus pandemic and how they might start to get back on track.

Newsom said he'd be releasing guidelines on Monday, May 25 for TV and film production to resume in counties where it's safe. However, the governor said Los Angeles County would likely be several weeks behind more rural California counties, as the COVID-19 cases and deaths there continue to climb.

INTERACTIVE: What will restaurants, gyms, flights, stores will look like after COVID-19?

All of roundtable guests expressed eagerness to get back to work as soon as safely possible. Production has been largely put on hold to avoid breaching social distancing requirements. Film releases have also been pushed back as movie theaters have been ordered to close.

During the discussion, the topic of when productions would continue was at least partially answered. There are shows in production, just not in California or the U.S.

"We are currently in production in places like South Korea, Iceland, Sweden and following and developing safety protocols there that are befitting the local environment," said Ted Sarandos, chief content officer of Netflix.

But there is concern about then to start filming in California again.

"When I speak with people around the industry it is a hyper-vigilance around this and a real desire to get it right so that we don't take two steps back," said filmmaker Ava DuVernay.

The head of the federal Justice Department's Civil Rights Division told Gov. Gavin Newsom that his plan to reopen California discriminates against churches.

Newsom held the roundtable discussion in lieu of his formerly daily press conference. The governor announced last week he would no longer hold those press briefings every week day.

Among the participants were actor Jon Huertas and former presidential candidate Tom Steyer. 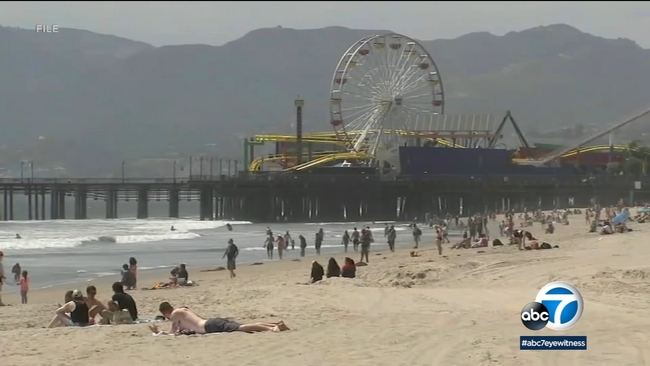 COVID-19 update: Health officials confirm over 2,000 cases for 4th day in a row