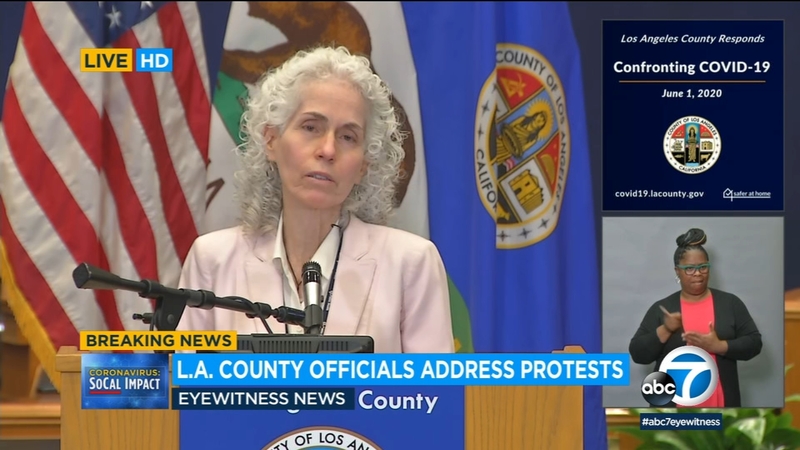 The director of the Los Angeles County Department of Public Health says there is a direct correlation between the impact of COVID-19 on black Americans and the racism and discrimination that they face.

Dr. Barbara Ferrer on Monday took some time out of a routine coronavirus briefing to address the death of George Floyd in Minneapolis, which has sparked civil unrest across the nation.

"We know that black Americans fare worse than other groups on virtually every measure of health status and it has become all too common to blame this on individual behaviors, when in fact the science is clear," Ferrer. "The root cause of health inequities is racism and discrimination and how it limits access to the very opportunities and resources each of us need for optimal health and well-being."

She also added that science points to the fact that "lifetime stress" of daily acts of discrimination and oppression plays a role in that as well.

Ferrer referred to the higher rate of black infant mortality as well as "shockingly higher rates" of maternal mortality among black women. That eventually extends into adulthood, she said, with the earlier onset of conditions such as heart disease, hypertension, diabetes and earlier deaths among black people in L.A. County.

"When I report each week that we have seen elevated numbers of black deaths in this county due to COVID-19, I am reporting on the consequences of these longstanding inequities," Ferrer noted.

Black Angelenos are dying from COVID-19 at a disproportionate rate, according to data released last month from the LA County Department of Public Health.

Ferrer became emotional when she went on to reference an opinion article written by Kareem Adul-Jabbar, published in the L.A. Times.

"Kareen Abdul-Jabbar put it eloquently...when he said the black community has to ask itself if being black means sheltering at home for the rest of their lives because the racism virus infecting the country is more deadly than COVID-19," she remarked, choking back tears.
Report a correction or typo
Related topics:
health & fitnesslos angeles countyblack lives mattercoronavirusracismgeorge floydu.s. & world
Copyright © 2021 KABC-TV. All Rights Reserved.
GEORGE FLOYD