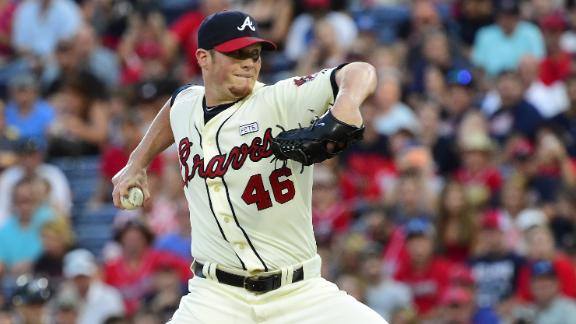 
Preller pushed ahead with his remarkable makeover of the Padres on Sunday when he acquired All-Star closer Craig Kimbrel and outfielder Melvin Upton Jr. from the Atlanta Braves for outfielders Carlos Quentin and Cameron Maybin, plus two minor leaguers and a draft pick.

While Upton will be reunited with his younger brother, Padres left fielder Justin Upton, this deal centered on Kimbrel, whom Preller called "an A-level performer."


The Padres take on $80.35 million in guaranteed salaries to Kimbrel and Melvin Upton while shedding the $24 million guaranteed still owed to the oft-injured Quentin and Maybin.


"With the chance to acquire Kimbrel, who's one of the best in the game, if not the best, it was a price we were willing to pay," Preller said during a conference call. "He's an A-level performer. He's 26 years old. It's an opportunity to strengthen our club."


Taking on the remaining $46.35 million on Upton's contract appeared to be the price for landing Kimbrel, who is owed a guaranteed $34 million. Upton was placed on the disabled list Saturday with a left foot injury.


Preller said the Padres weren't necessarily "motivated to try to get Melvin and Justin together as brothers. It was a situation where we felt overall the deal fit for us, and we attempted to go out and add quality pieces to get Craig Kimbrel in this deal."


"I know that there's going to be a lot of unhappy fans because of it," Braves general manager John Hart said Sunday. "But my hope is they'll take a look at all the things that we have going on, where we were, and ultimately where we think we can get to, and sometimes you've got to make these tough calls to do that."


The Braves said Monday that Jason Grilli, who was to be the main set-up man for Kimbrel, will close games for the Braves with Kimbrel gone.


Since his first full season in 2011, when he won the NL Rookie of the Year award, Kimbrel leads all big league closers with 185 saves. He has been an All-Star each of the past four seasons.


"Look, he's a fan favorite, as he should be," Hart said. "... He's that kind of a guy. He's a guy you want to look at. So yeah, did I think about that as I went through this? Absolutely. I mean, I'm a human being. I look at it and go, here's a popular player, fan favorite, star-quality player. It wasn't something that I relished doing.


"This is a club that we don't want to see just sort of sink into the morass here for a period of time. We think we're doing some exciting things, so many good things going on behind the scenes. ... I love Craig Kimbrel. He's a special guy. It was a hard thing to do."


Preller said Kimbrel was trying to catch a plane in Miami to make it to Los Angeles in time for the Padres' opener against Clayton Kershaw and the Dodgers on Monday afternoon.


Huston Street led San Diego with 24 saves last year before being traded to the Angels. Joaquin Benoit, the incumbent closer before Kimbrel was obtained, had 11 saves last year.


The Upton brothers played together for two seasons in Atlanta. Melvin Upton missed most of spring training -- he didn't have a single big league exhibition at-bat -- and Preller said the Braves felt he will not be ready to play in a game for three to four weeks.


Entering the third year of a five-year, $75 million deal, the richest free-agent deal in Braves history, Upton had compiled a .198 average in his two seasons in Atlanta and hit a total of 21 home runs in that span.


San Diego had a glut of outfielders after Preller obtained Matt Kemp, Justin Upton and Wil Myers in separate deals in December.


Quentin has been slowed by knee injuries and never played more than 86 games in any of his three seasons with his hometown Padres.


Maybin also has been slowed by injuries and was suspended for 25 games last year after testing positive for amphetamines.


This latest move has improved the odds of the Padres winning the World Series, going from 25-1 to 20-1, according to the Westgate Las Vegas SuperBook.

Kurkjian: Kimbrel makes Padres major threat
Tim Kurkjian explains how the Padres will lock down the ninth inning with the addition of closer Craig Kimbrel and how Kimbrel increases San Diego's chances of being a threat in the playoffs.