Air quality on Fourth of July weekend in Southern California was worst in a decade, officials say 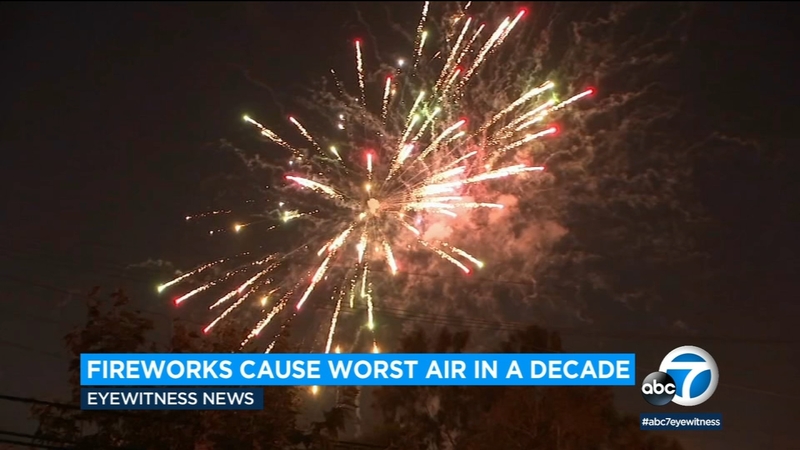 SoCal air quality on Fourth of July weekend was worst in a decade, officials say

LOS ANGELES (KABC) -- The use of legal and illegal fireworks around Southern California brought the worst air quality to the region in a decade, the South Coast Air Quality Management District reported Wednesday.

Concentrations of PM2.5, fine inhalable particles, were 70% higher than previous years between 7 p.m. on the Fourth of July and 7 a.m. the next day in the South Coast Air Basin, which includes Orange County and parts of Los Angeles, Riverside and San Bernardino counties, according to the AQMD.

Air quality reached "Very Unhealthy" and "Hazardous" levels in parts of Los Angeles and Orange counties. Dry air during the weekend trapped the pollution, adding to the high levels.

"Breathing fine particulate matter can lead to a wide variety of cardiovascular and respiratory health effects such as heart attacks, asthma aggravation, decreased lung function, coughing or difficulty breathing and may lead to premature death in people with heart or lung disease,'' according to an AQMD statement.

The highest concentrations of PM2.5 were detected in Central Los Angeles, North Hollywood and Anaheim, and some instruments had so much residue on them that they could not accurately collect data, according to the pollution control agency.

The relentless barrage of fireworks that dominated the skyline on the Fourth of July caused destruction on the ground, according to officials.

Not only did the relentless barrage of fireworks that dominated the skyline cause unhealthy air quality, it also caused destruction on the ground, officials said. Fire crews worked to put out hundreds of spot fires across California caused by wayward fireworks.

In Northridge, illegal fireworks caught some palm trees on fire and then spread to a nearby apartment building.