The UCLA Bruins are supposed to host the USC Trojans at the Rose Bowl on Sept. 26, but the college football season is in doubt for the fall, according to an ESPN report.
KABC
By Alex Cheney 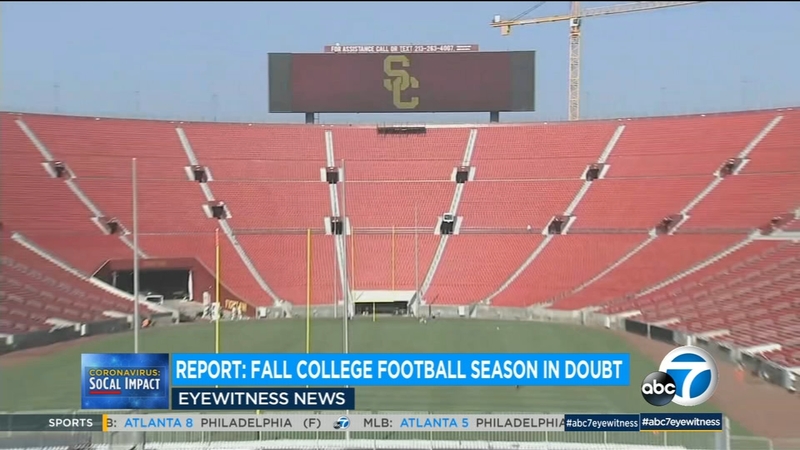 LOS ANGELES (KABC) -- The UCLA Bruins are supposed to host the USC Trojans at the Rose Bowl on Sept. 26, but the college football season is in doubt for the fall, according to an ESPN report.

The future of this year's college football season, and other collegiate sports, is in jeopardy after commissioners of the Power 5 conferences -- ACC, Big 12, Big Ten, Pac-12, SEC -- held an emergency meeting Sunday amid growing concerns among college athletics officials that fall sports can't be played because of the coronavirus pandemic, sources told ESPN.

No major decisions were made Sunday night, but multiple sources in several Power 5 conferences told ESPN the commissioners discussed plans for cancelling or postponing fall sports.

Several sources indicated to ESPN that Big Ten presidents, following a meeting on Saturday, is ready to postpone the season until spring, and they wanted to gauge if commissioners as well as university presidents and chancellors from the other Power 5 conferences will fall in line with them.

Several high-profile players from Power 5 schools, including USC quarterback Kedon Slovis, released a joint statement Sunday expressing their desire to play this fall and shared items they felt were needed to ensure a safe environment for student-athletes.

Many schools like USC and UCLA have already released conference-only schedules for fall football.

Presidents and chancellors of Pac-12 schools, which include USC and UCLA, are scheduled to meet Tuesday to further discuss concerns and decide on plans for fall football.

The Mid-American Conference, which is not in the Power 5, announced Saturday its decision not to play football in the fall.