An Apple Valley man was hospitalized and near death after he and nine other family members tested positive for COVID-19 following a backyard barbecue.
KABC
By Rob McMillan 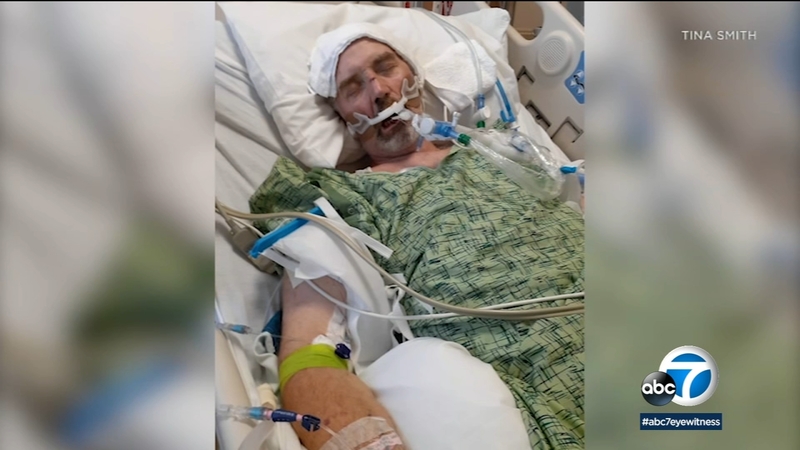 APPLE VALLEY, Calif. (KABC) -- Several members of an Inland Empire family are recovering after a COVID-19 outbreak linked to a backyard party earlier this summer.

Ten of the 12 people who attended the June 7 party in Fontana tested positive. Two of them were hospitalized for weeks.

"It was like, let's have a get-together in the backyard," said Tina Smith of Apple Valley. "No one's been sick. It was a beautiful day."

"And that's when it all went down."

Smith said her family took the virus seriously from the start. They stayed home and used hand sanitizer frequently and wore masks. But in early June, after several missed birthday parties, they decided to plan an outdoor get-together.

"We stayed outside in the backyard. We didn't social distance, and sat close together," said Smith. "We didn't hug too much. It had been a while since we'd seen each other."

Smith said several days after the party, both she and her husband started developing symptoms. She had a fever for a couple of days but said her husband's condition was far worse.

"This fever did not shake, every day he had a fever for six days. So we called our doctor and she said to come in and take a COVID test."

Smith said both she and her husband tested positive.

"Are you kidding me? We had this innocent little barbecue with just our family. We thought it was safe."

Doctors at CHOC Children's in Orange County say 14-year-old Agustina Rojas was the sickest COVID-19 patient they've ever had. The Placentia teen was near death twice, but she beat the virus and is now at home after spending 57 days in the ICU.

They both work in the health-care industry, and she said she can only speculate whether one of them got sick some time before the get-together.

"He goes to a lot of different job sites so it was difficult to track down if he got it first," said Smith. "But we don't know. Could it have been in a grocery store? Who knows what happened?"

"They put my husband on a ventilator on day one. For days he was up and down, and on a BiPAP machine trying to breathe for weeks."

Smith said her husband's progress was like a roller coaster. After being hospitalized for one month, just when he was showing improvement, she said his condition plummeted.

"They had to intubate him again. He had two collapsed lungs; pneumonia; two chest tubes," said Smith, who said doctors told her the situation was grave.

"They called my son and I in to say goodbye. There was nothing more they could do because it was so severe."

Amazingly, she said her husband is now recovering. He was released from the hospital in August and has spent the last month in rehabilitation. But the coronavirus took a severe toll on his muscular system.

"His legs are very weak. He lost 45 pounds in the last 90 days. He's very thin; the muscle strength isn't there."

Family members credit their father's faith, nightly prayers and angels on Earth for saving his life from coronavirus.

Smith said both she and her husband have diabetes and mild cases of high blood pressure. Of the eight other family members who got sick, none had conditions as severe.

But as the downward trend of COVID-19 cases across Southern California continues, and hospitalizations decline, she urges people to continue to take the virus seriously.

"Wear your masks for other people, not for you. For your grandma; for your children," said Smith. "We had three children who tested positive; two of them had mild symptoms, and the other didn't get sick. But that isn't always the case."

Despite her husband's poor condition, she said she just feels blessed he survived.

"It's been a journey. This COVID is no joke," said Smith. "My husband was a vibrant worker and now he's learning how to walk. That's beyond belief that he has to learn to walk; how to dress again; learn to eat again.