KABC
By Eileen Frere
LOS ANGELES (KABC) -- Tobie Edwards clutches yellowed letters from strangers who knew her father more than 40 years ago -- as yet another anniversary of his murder approaches.

Mike Lee Edwards, an LAPD officer with 77th Street Division, was murdered May 10, 1974. His body was found the next morning in an abandoned building at 122 1/2 West 89th Street in South Los Angeles by two teenagers.

The 25-year-old officer had been handcuffed, his shirt covered his head. He was shot several times execution-style.

According to police reports, Edwards had been dead several hours before he was discovered.

His gun, a .38-caliber Smith & Wesson Airweight, was missing as well as some money.

Tobie Edwards, just 6 years old, was playing in the backyard when her family got the news. Her brother, just 1-year-old, was too young to remember.

"A police officer came in the back and stayed with me," Tobie, now 47, recalls as a tear runs down her cheek. "They didn't want to tell me too much but I knew it was about my dad." 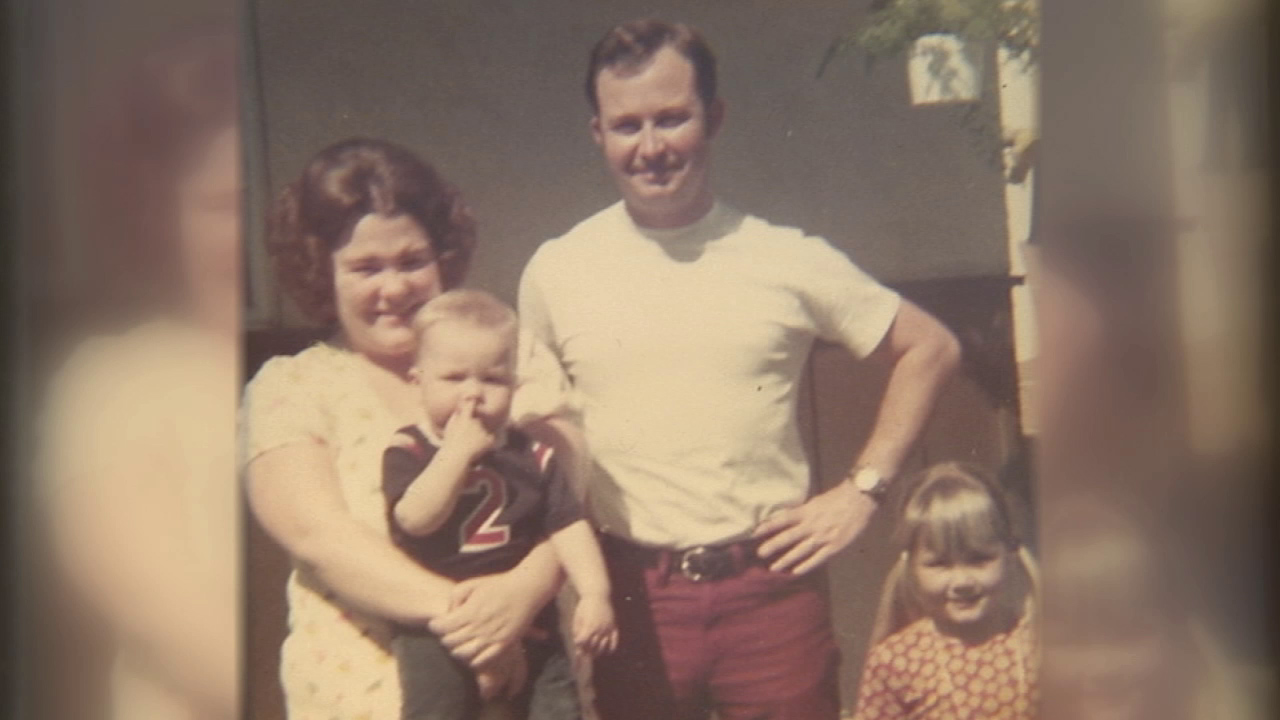 Investigators say Mike Edwards was last seen alive May 10, 1974, celebrating with fellow officers at the Police Academy bar. He was about to start vacation after finishing a stint with the LAPD anti-gang unit, CRASH. He was last seen leaving around 10:30 p.m. and had told others he had a date in Long Beach.

Fifteen hours after his body was found, police discovered his gold Pinto station wagon about 10 miles away from the murder scene at 1034 West 186th Street in Los Angeles.

According to police reports, the keys were left in the ignition. A handkerchief was found in the car, but no suspect prints were discovered.

Detectives canvassed the area but found only a few people who heard gunshots -- no one witnessed the actual shooting.

To this day, more than 40 years later, what happened is still a mystery.

"It was turbulent times, officers had to be careful," said Det. Daryn DuPree with the LAPD Robbery/Homicide Division. "There were a lot of threats against the Police Department."

A week after his murder, the Symbionese Liberation Army -- that had kidnapped heiress Patty Hearst -- got into a shootout with police not far from where Edwards was killed. Police looked for a connection, but it was a dead end.

Police compared the SLA guns with the 9mm bullets found at Edwards' murder scene, but found no match. Detectives also looked at gang members who took credit for the murder, but they too were ruled out.

A reward offer of $15,000 to find the person who executed Edwards failed to turn up any useful clues.

Detectives, and those who knew Edwards, believe more than one person was involved in the murder.

"He had the whereabouts and knew how to handle himself at the time and I think he was just overpowered by more than one person," said Alan Edwards, no relation.

Alan Edwards graduated from the Academy with Mike in 1969. He remembers his friend and fellow officer was a good cop -- conscientious and hardworking, but also kind. He usually had a smile on his face.

"There was a little bit of a love triangle going on," insists Tobie.

Mike Edwards was separated from his wife Penny Sue and was dating a Long Beach woman, who we are not identifying because she still fears for her safety. That woman had previously dated former LAPD cop Bill Pearson.

Those who knew him say he was on a downward spiral after being fired from the Los Angeles Police Department in 1973. He broke up with his girlfriend shortly after, and she started dating Edwards, who knew Pearson through the LAPD.

She says Edwards was supposed to meet her the night he was murdered.

"Bill Pearson has not been ruled out," said Det. DuPree.

Documents obtained by Eyewitness News show Pearson told detectives he had been "experiencing blackout spells" the night of the murder and "could not state whether or not he had been involved" due to his memory lapse.

Police investigated Pearson and talked with those associated with him, but were unable to account for his whereabouts around the time of the murder.

"What he remembers I'm not going to say," said DuPree. "But he is aware of the current investigation... and he is being looked at."

One year after Mike Edwards' murder, Pearson's downward spiral continued. He was arrested for felony vehicular manslaughter after driving drunk and speeding, causing an accident on Interstate 5 near Myford Road in Irvine that killed a 16-month-old boy and injured the parents. He pleaded no contest and was sentenced to one year in jail.

Over the years, detectives have re-interviewed Pearson about Edwards' murder.

So far, despite repeated attempts, Pearson has not returned any of our calls.

He says police have tested more than 100 guns to try to see if they could find the weapon used, with no luck.

Police have interviewed more than 1,000 people over the years, and evidence has been re-submitted multiple times for DNA testing with no hits.

As Tobie looks at the last photo taken of her family together in 1974, the San Clemente resident tearfully said, "We just want to know."

"For my mom especially, she always wanted to know what happened, and, you know, she passed away before she was able to know."

Alan Edwards, who visits his friend's gravesite regularly at Forest Lawn in Cypress, said as people grow older, he hopes those responsible will feel compelled to speak up.

"Maybe a relative or friend of the suspect or the suspects themselves might come clean. This would put my mind at ease if it were solved," he said.