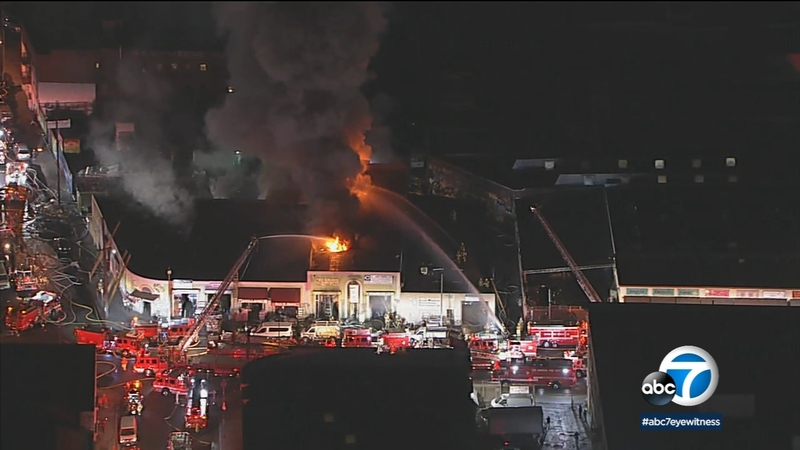 DOWNTOWN LOS ANGELES (KABC) -- A dramatic fire erupted at a commercial building in downtown Los Angeles on Tuesday morning after firefighters declared a knockdown of a blaze at an adjacent business, officials said.

The first incident was reported before 5 a.m. in the 800 block of South Crocker Street, according to the Los Angeles Fire Department.

"Firefighters are making good progress on the offensive, interior attack," the agency said in a preliminary statement. "The structure is filled with rolled textiles, thus creating a heavy fire load."

The Fire Department declared a knockdown of that fire at 5:22 a.m., some 40 minutes after they arrived at the scene.

Firefighters then discovered that the flames had extended into a business next door. "Additional resources were requested, raising this to a 'major emergency incident,'" the LAFD said.

More than 130 firefighters responded to the fire, using multiple engine ladders to attack flames that shot through the roof of each building. One firefighter was transported to a hospital with a "heat-related illness" that was not life-threatening, according to a news release.

"Due to the heavy amount of fire load inside of these multiple occupancies, with rolls of fabric and flower stores, we've been forced into a defensive operation, meaning that we pulled our firefighters from the inside out, to ensure their safety,'' LAFD Capt. Erik Scott told reporters at the scene.

At 8:19 a.m., about 3 1/2 hours after the fire began, the LAFD announced the fire was completely extinguished.