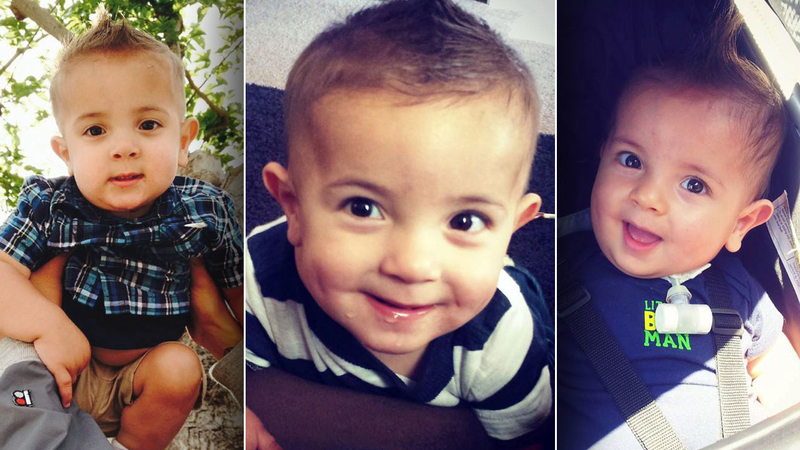 LOS ANGELES (KABC) -- At nearly 2 years old, Baby Blake is a healthy and happy toddler who loves spending time with his parents and big sister.

But before he was even born, doctors performed surgery on Blake while he was still in the womb and attached to the umbilical cord.

Known as the EXIT procedure, the surgery is fraught with tremendous risk because doctors literally have to deliver the baby half way, making it possible for the infant to breathe on its own once the cord is cut.

"Once a baby first comes out, it needs to breathe," said Dr. Esther Friedrich with Kaiser Permanente L.A. Medical Center.

That was impossible for Blake. Three large tumors were crowding his neck and chest. They were choking him. A natural delivery would have meant instant death.

But in her 34th week of pregnancy, Britnie Sanchez noticed a warning sign. Her belly had grown faster than normal.

"She measured larger than she was supposed to be, and that was because there was too much fluid around Blake," said Friedrich.

The fluid was a result of the tumors. Doctors didn't know if they were cancer. Regardless, doctors thought that without some kind of intervention, Blake wouldn't survive after they cut his umbilical cord.

Doctors gave Sanchez and her husband, Christopher, a choice: wait until the baby is delivered and then try to put in a breathing tube, which carried a big risk of not working, or attempt an EXIT procedure. That's short for Ex utero Intra Partum Treatment.

They decided to go with the EXIT procedure. Anytime you open up the uterus, the body automatically rushes to deliver, so doctors had to trick the body. They flushed warm artificial amniotic fluid into the womb. It worked.

Doctors put in a breathing tube, cut his umbilical cord and put him on a respirator.

The tumors turned out to be benign and could be shrunken with medication. However, the road to recovery continued. Doctors wanted to keep Blake on a respirator at home for two long years. But shortly before he turned 1, Blake decided to give himself a present.

"He pulled the trach out," said Blake's dad.

And he hasn't needed it since.

He surprised everyone. No one expected him to breathe on his own that day.