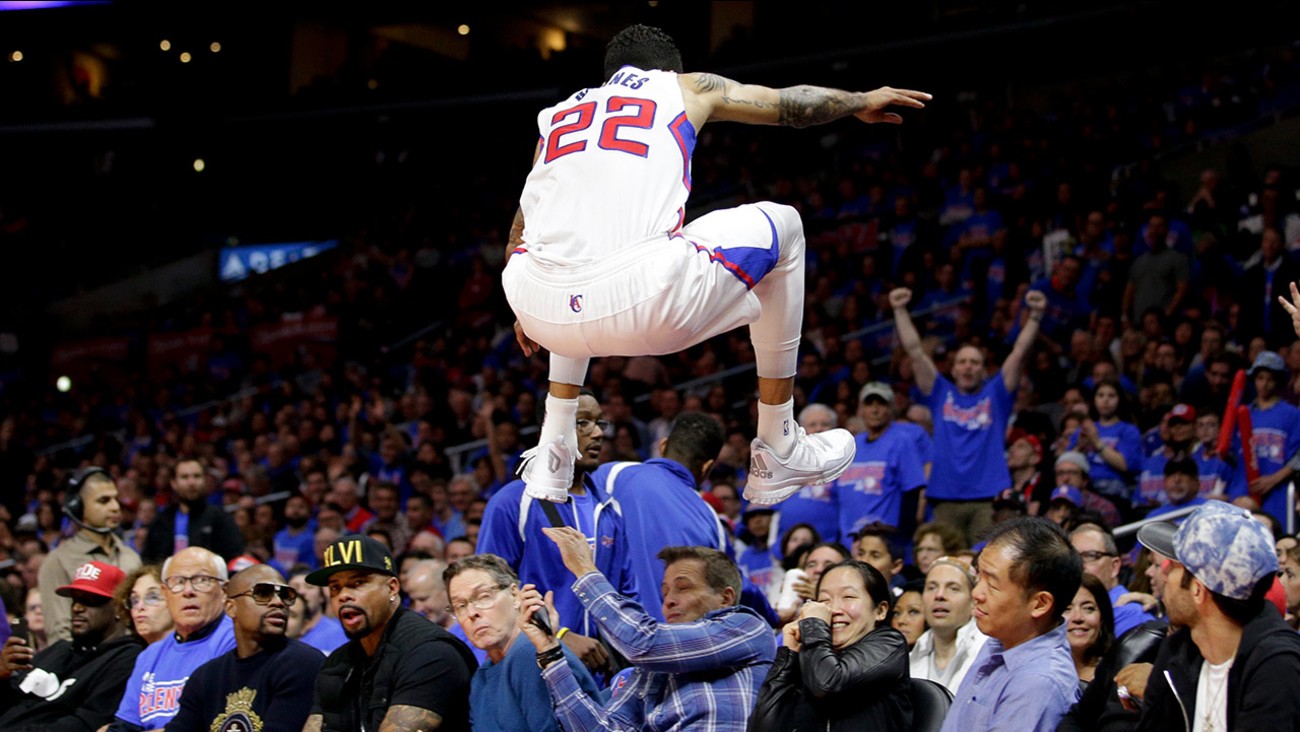 Los Angeles Clippers forward Matt Barnes soars over a row of fans while going after a loose ball during the second half of Game 3 in a second-round NBA basketball playoff series. (Jae C. Hong)

Chris Paul returned from a hamstring injury to bolster the Clippers with 12 points and seven assists after he missed the first two games of the series. J.J. Redick had a career playoff-best 31 points, Blake Griffin added 22 points and 14 rebounds, and DeAndre Jordan had 15 rebounds.

But it was the coach's son who came off the bench and helped the Clippers use a 20-3 run to finally get the separation they lacked in the first half. Rivers scored 15 points on 6-of-8 shooting in the dominating offensive outburst that extended the Clippers' lead to 99-76 going into the fourth.

He was so good that coach-dad Doc Rivers kept him on the court for the first two minutes of the fourth. Fans saluted Austin Rivers by chanting his name and giving him a standing ovation when Paul replaced him.

James Harden had 25 points and 11 assists, and Dwight Howard added 14 points and 14 rebounds for the Rockets.

Game 4 is Sunday at Staples Center.

Rivers started in place of Paul the last two games while the All-Star guard fought back from a strained left hamstring. Rivers had a playoff career-high 17 points in the Game 1 win and followed up with 10 points in the Game 2 loss.

He spelled Paul with 6 minutes left in the third and promptly tore through the Rockets. With starters Harden and Terrence Jones on the floor, Rivers shredded Houston's defense on repeated driving layups. He tossed in a 3-pointer, completed two three-point plays and capped his exploits with a floating jumper.

Jordan chipped in three points and Redick two while the Clippers held the Rockets scoreless over the final 3:45 of the third.

The Clippers led by 12 before the Rockets outscored them 9-2 to get within five. That's when Rivers singlehandedly put the game out of reach in the biggest blowout yet of the best-of-seven series.

The Rockets never made a run in the fourth, and fans started baling out with three minutes to go.

Jason Terry was called for a technical foul in the fourth after tripping Griffin and an altercation ensued, leading to Terry's ejection with eight minutes left in the game. Terry finished with 13 points.

Paul had an immediate effect on his team. He assisted on consecutive dunks by Griffin, including a one-handed jam, in the game's first few minutes. Paul missed his first two shots before scoring on consecutive jumpers that launched an 18-9 spurt to close the first quarter with the Clippers leading 33-24.

Harden's jumper beat the halftime buzzer, capping a 5-0 spurt that helped the Rockets cut their deficit to 64-57 after they made five 3-pointers in the second quarter. The Clippers shot 54 percent in the half, when their largest lead was 12.
Related topics:
sportslos angeles clippershouston rockets
Copyright © 2021 by The Associated Press. All Rights Reserved.
More Videos
From CNN Newsource affiliates
TOP STORIES