Could schools be COVID-19 super-spreader sites? Experts still aren't sure. 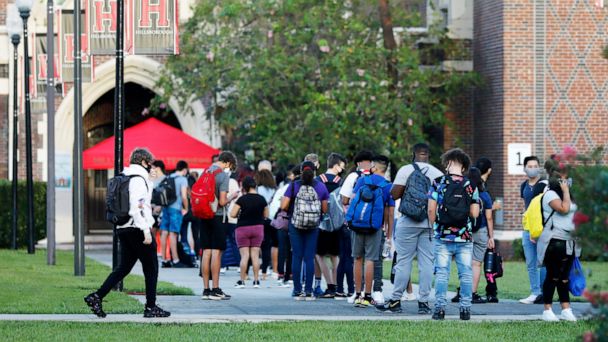 Schools have received a lot of attention during the pandemic, but without a rigorous national effort to collect more and better data it's too early to tell whether in-person schooling is significantly contributing to COVID-19 transmissions, according to experts and education advocates.

Some districts, states and educational groups are striving to be as transparent as possible, while others are lagging far behind -- so it can't yet be determined whether a classroom or playground could become a super-spreader site.


"It could be that maybe it's just not as bad as people said," Florida Education Association President Andrew Spar told ABC News. "But it could also be that we're just not accurately reporting this information."

Without a concerted effort to test children in Florida, it's been difficult to tell so far, he added.

In a story for The Atlantic, Oster, in examining data from the last two weeks of September that included almost 200,000 children in 47 states, wrote that students showed an infection rate of 0.13% and staff saw a rate of 0.24%.

"We are starting to get an evidence-based picture of how school reopenings and remote learning are going (those photos of hallways don't count), and the evidence is pointing in one direction. Schools do not, in fact, appear to be major spreaders of COVID-19," Oster added.


Oster told ABC News that the findings show "there are a bunch of schools here that are opening safely," adding that almost all of those surveyed have mask mandates and "probably more than half" have something else in place like social distancing protocols.

At an Infectious Disease Society of America media briefing earlier this week, Wendy Armstrong, a professor at the Emory University School of Medicine, specifically addressed the dataset's findings, calling it "encouraging" and a "valiant effort." But she added that the "data are limited to those schools that choose to enroll and record these data. So, we know that this is a somewhat biased sample."

"It is encouraging, there's no doubt about that, but again there's, I think, significant bias in the results," Armstrong added. "Schools that choose to report are often those not only that are tracking carefully -- have mitigation strategies and plans -- but probably have better outcomes."

Armstrong said without a broad national surveillance effort -- more schools, more systems, more robust data -- that "we can't know for sure" even though so far "we have not seen a massive super-spreading event that has been obvious in the school systems."

Oster acknowledged current data sets may be a bit biased, but she added that the data she's working to collect still shows that opening schools safely is possible.


"Many schools, especially with those kinds of resources or protocols, have been able to do so effectively, and at low risks to kids," Brownstein said. "But, clearly, there are many schools that there are a lot more concerns about -- not being able to open because they can't have the proper protocols, the proper ventilation or the concerns that teachers have about their own safety. So, it's definitely complicated."

"First and foremost," said Spar, the education association president in Florida, "we are not doing massive testing for COVID in our schools. And so, because we're not doing extensive COVID testing, it's hard to say whether or not our schools are super-spreader events."

Teachers or staff members could have the virus but not be showing symptoms, Spar added.

Clay Robison, a spokesman for the Texas State Teachers Association, shared a similar sentiment with ABC News, adding that many large urban districts have only been reopened for a few weeks.

"Most of the school kids in Texas have not been on campus yet, and so we don't know what might happen if we get a large number of students and parents who decide, all of a sudden, they want their kids to be taught in school," Robison said. "We don't know what might happen then. There may be an explosion of cases. We hope not."
Report a correction or typo
Related topics:
abc newsnational
Copyright © 2021 ABC News Internet Ventures.
TOP STORIES
LA to require proof of vaccination or testing for city employees
How do new CDC guidelines affect SoCal?
COVID hospitalizations in LA County hit highest level since mid-March
1 killed, 1 wounded in shooting at Corona movie theater
CDC reverses course on indoor masks in some parts of US
Ed Buck found guilty in West Hollywood meth overdose case
Walmart will cover 100% of college tuition for its workers
Show More
Expect higher prices, fewer supplies when back-to-school shopping
CSU to require all students, staff to get COVID-19 vaccine
Arrest made in fatal shooting of Rite Aid clerk in Eagle Rock
Tenants of Caltrans-owned homes in El Sereno upset with SB51
OC congresswoman introduces Kobe Bryant Day resolution
More TOP STORIES News