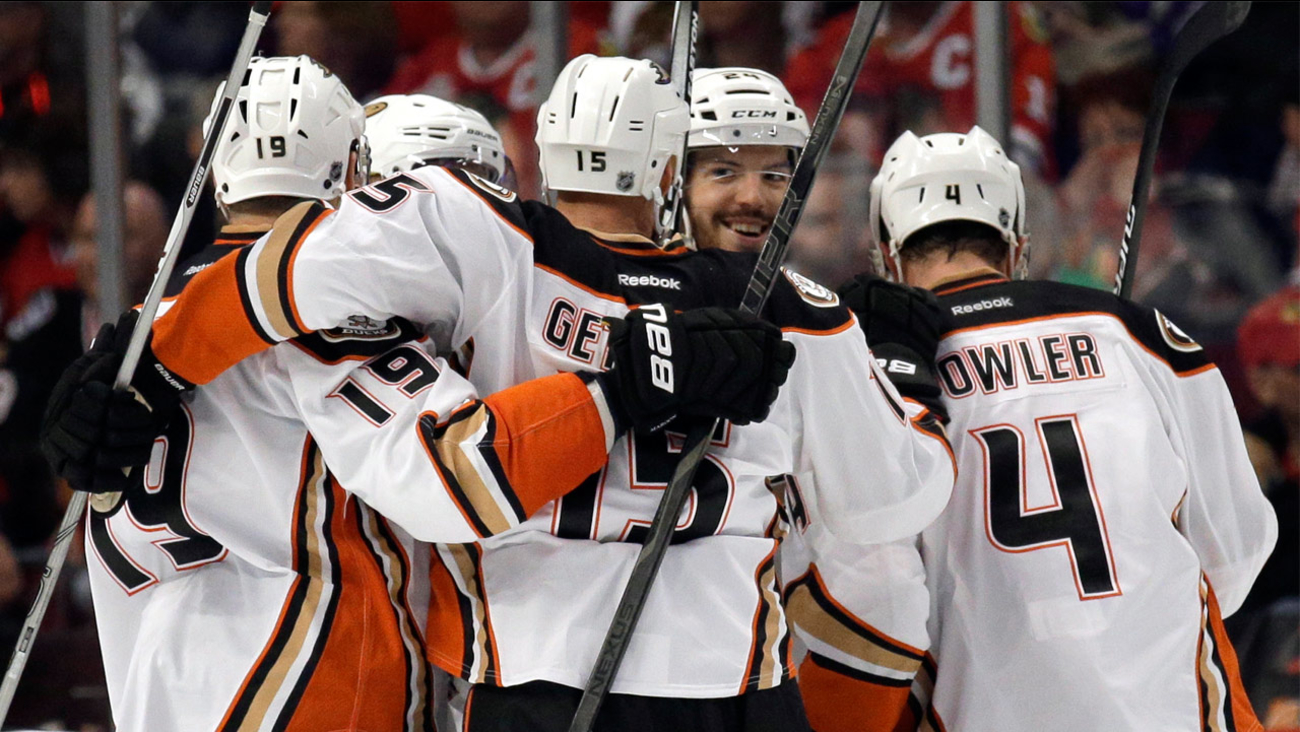 Anaheim Ducks defenseman Simon Despres, second from right, celebrates a goal with teammates during the second period of Game 3 of the Western Conference finals May 21, 2015. (Nam Y. Huh)

CHICAGO -- Frederik Andersen made 27 saves, helping Anaheim kill off five power plays, and the Ducks beat the Chicago Blackhawks 2-1 on Thursday night for a 2-1 lead in the Western Conference finals.

Defenseman Simon Despres scored his first career playoff goal in the second period as top-seeded Anaheim bounced back quite nicely from a triple-overtime loss at home in Game 2. Patrick Maroon had a power-play goal and Ryan Getzlaf added two assists.

Ryan Kesler's two holding penalties contributed to more than nine power-play minutes for the Blackhawks, but the Ducks' penalty killers kept most of Chicago's opportunities to the outside and Andersen stood his ground during a couple of goalmouth scrums.

Game 4 is Saturday night in Chicago.

The teams were tied at 1 before Despres drove a pass from Getzlaf past Crawford from the right wing with 55 seconds left in the second. Despres came over in a trade with Pittsburgh in March.

The Blackhawks outshot the Ducks 11-5 in the third, but couldn't get the tying goal as Andersen continued his great run in the playoffs. The 25-year-old Andersen has allowed just 23 goals in 12 games.

Two days after Chicago's grueling 3-2 victory in Anaheim, the Blackhawks shuffled their lineup while the Ducks went with the same group for Game 3. Forwards Kris Versteeg and Joakim Nordstrom were active, replacing Antoine Vermette and Teuvo Teravainen in a bit of surprise.

The move added two fresh players to Chicago's lineup, but Vermette is a strong performer in the faceoff circle, and Teravainen is one of the team's most promising young players. Versteeg and Nordstrom were mostly quiet in their first action since the first round against Nashville.

While the Blackhawks struggled on the power play, the Ducks capitalized on their only chance with the man advantage. With Marian Hossa in the box for holding, Maroon tipped Hampus Lindholm's long slap shot past Crawford at 12:55 of the first for a 1-0 lead.

Anaheim then killed off a double minor on Jakob Silfverberg for high-sticking, but Chicago tied it at 1 when Kane converted a spinning backhander in the final minute of the first. It was the first point of the series for Kane, who had seven goals and six assists in the first two rounds.

The Ducks made a big push at the start of the second, recording eight of the first nine shots on goal. The Blackhawks started to play better midway through the period, but Andersen had a nice stop on an open look for Jonathan Toews at 9:17, and then had an outstanding glove save on Brandon Saad with 1:24 to go.
Related topics:
sportschicago blackhawksu.s. & worldanaheim ducks
Copyright © 2021 by The Associated Press. All Rights Reserved.
More Videos
From CNN Newsource affiliates
TOP STORIES