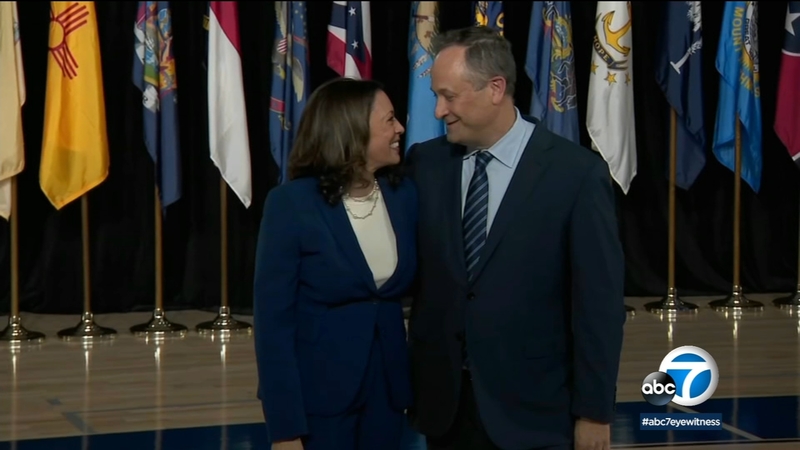 Kamala Harris' husband will be 'an Angeleno in the White House'

LOS ANGELES (KABC) -- With Kamala Harris' election to the vice presidency, Southern Californians are learning more about her husband, Doug Emhoff, who built a career as a high-profile entertainment lawyer in the region before his wife launched her presidential and VP campaigns.

"We will have our senator, Kamala Harris, who's had the good judgment to marry a great boy from Los Angeles and now lives here, we will have an Angeleno in the White House alongside Joe Biden -- an amazing and fierce advocate for justice, for opportunity and for equity in our country," Mayor Eric Garcetti said.

Emhoff, a Cal State Northridge graduate, will be the first man in U.S. history to hold the role of vice-presidential spouse.

Emhoff has said he plans to leave his private law practice by Inauguration Day to focus on White House duties, but hasn't yet announced what issues he plans to take on.

It was Emhoff who filmed a video of Harris calling Biden after news of their win, which she shared on social media.

Although most people know that Vice President-elect Kamala Harris grew up near Oakland, few may know she went to high school in Canada. It was Harris' high school best friend who would have a profound impact on her choice of career.

Harris and Emhoff met in 2013 and married a year later. It was Harris' first marriage and Emhoff's second; his children are in their 20s and call Harris "Momala," a play on her name and a Yiddish word for "little mother."

The two were set up by a friend, and Harris recalls the scrutiny she faced as a single woman in her 40s and her hesitance to be public about her relationships in her memoir, "The Truths We Hold." She first brought Emhoff out in public to a 2014 speech about a truancy initiative she'd pursued. Her team would refer to everything that came next as A.D. - After Doug.

"They knew how much he made me laugh. I did, too," she writes.

Harris was attorney general of California at the time, and Emhoff was practicing law as a managing director for the West Coast branch of Venable LLP, handling clients in the entertainment industry with a focus on trademark disputes and intellectual property. He'd previously represented clients including Merck, Walmart and an arms-dealer based in Fresno clients that today seem out of step with progressive wings of the Democratic Party.

When Harris began her term in the U.S. Senate in 2017, Emhoff moved to DLA Piper, which had a presence in Washington and Los Angeles, where Harris and Emhoff split their time. More recently, he's represented clients including a production company and a prominent wine maker.