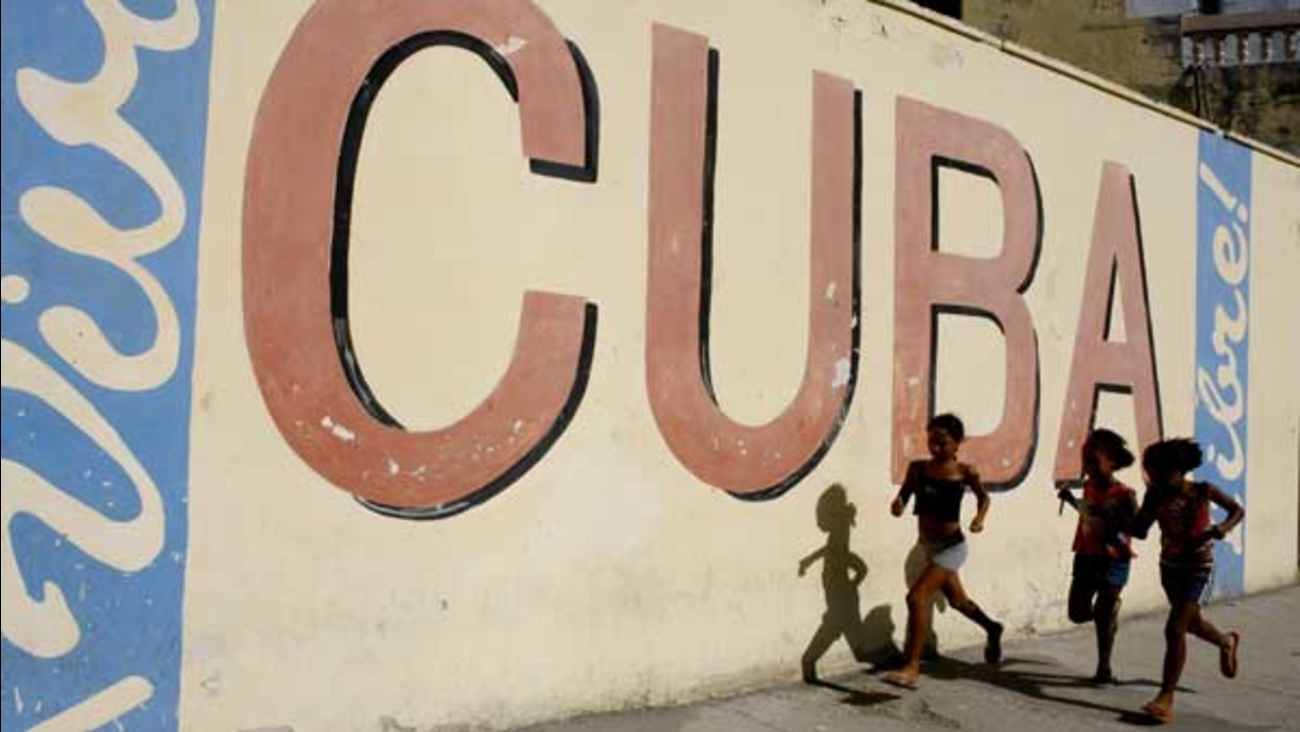 WASHINGTON (KABC) -- More than a half century of Cold War and lingering enmity came to an abrupt but quiet end on Monday as the United States and Cuba restored full diplomatic relations.

The new era began with little fanfare when an agreement between the two nations to resume normal ties on July 20 came into force just after midnight Sunday and the diplomatic missions of each country were upgraded from interests sections to embassies. When clocks struck 12:00 in Washington and Havana, they tolled a knell for policy approaches spawned and hardened over the five decades since President John F. Kennedy first tangled with youthful revolutionary Fidel Castro over Soviet expansion in the Americas.

Without ceremony in the pre-dawn hours, maintenance workers were to hang the Cuban flag in the lobby of the State Department alongside those of other nations with which the U.S. has diplomatic relations. The historic shift will be publicly memorialized later Monday when Cuban officials formally inaugurate their embassy in Washington and Cuba's blue, red and white-starred flag will fly for the first time since the countries severed ties in 1961. Secretary of State John Kerry will then meet his Cuban counterpart, Bruno Rodriguez, and address reporters at a joint news conference.

The U.S. Interests Section in Havana plans to announce its upgrade to embassy status in a written statement on Monday, but the Stars and Stripes will not fly at the mission until Kerry visits in August for a ceremonial flag-raising.

And yet, though normalization has taken center stage in the U.S.-Cuba relationship, there remains a deep ideological gulf between the nations and many issues still to resolve. Among them: thorny disputes such as over mutual claims for economic reparations, Havana's insistence on the end of the 53-year-old trade embargo and U.S. calls for Cuba to improve on human rights and democracy. Some U.S. lawmakers, including several prominent Republican presidential candidates, have vowed not to repeal the embargo and pledged to roll back Obama's moves on Cuba.

Still, Monday's events cap a remarkable change of course in U.S. policy toward the communist island under President Barack Obama, who had sought rapprochement with Cuba since he first took office and has progressively loosened restrictions on travel and remittances to the island.

Obama's efforts at engagement were frustrated for years by Cuba's imprisonment of U.S. Agency for International Development contractor Alan Gross on espionage charges. But months of secret negotiations led in December to Gross's release, along with a number of political prisoners in Cuba and the remaining members of a Cuban spy ring jailed in the United States. On Dec. 17, Obama and Cuban President Raul Castro announced they would resume full diplomatic relations.

Declaring the long-standing policy a failure that had not achieved any of its intended results, Obama declared that the U.S. could not keep doing the same thing and expect a change. Thus, he said work would begin apace on normalization.

That process dragged on until the U.S. removed Cuba from its list of state sponsors of terrorism in late May and then bogged down over issues of U.S. diplomats' access to ordinary Cubans.

On July 1, however, the issues were resolved and the U.S. and Cuba exchanged diplomatic notes agreeing that the date for the restoration of full relations would be July 20.

Cuba's ceremony at the stately 16th Street mansion in Washington that has been operating as an interests section under the auspices of the Swiss embassy will be attended by some 500 guests, including a 30-member delegation of diplomatic, cultural and other leaders from the Caribbean nation, headed by Foreign Minister Rodriguez.

The U.S. will be represented at the event by Assistant Secretary of State for Western Hemisphere Affairs Roberta Jacobson, who led U.S. negotiators in six months of talks leading to the July 1 announcement, and Jeffrey DeLaurentis, the chief of the U.S. Interests Section in Havana who will now become charge d'affaires.

Although the Interests Section in Havana won't see the pomp and circumstance of a flag-raising on Monday, workers there have already drilled holes on the exterior to hang signage flown in from the U.S., and arranged to print new business cards and letterhead that say "Embassy" instead of "Interests Section." What for years was a lonely flagpole outside the glassy six-story edifice on Havana's seafront Malecon boulevard recently got a rehab, complete with a paved walkway.

Every day for the last week, employees have been hanging hand-lettered signs on the fence counting down, in Spanish, to Monday: "In 6 days we will become an embassy!" and so on.