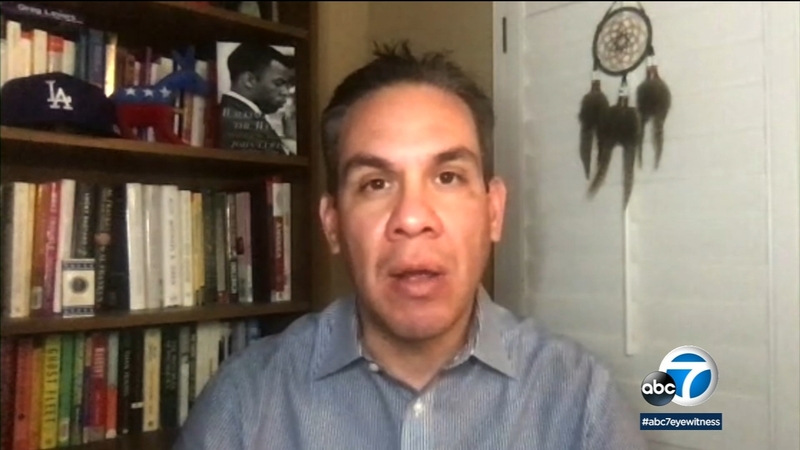 With only eight days left in his term, House lawmakers are swiftly moving forward with impeachment efforts or other steps to remove President Trump from office.

Rep. Pete Aguilar, who was at the U.S. Capitol during last week's deadly attack, is among that group of lawmakers calling for his removal and spoke with Eyewitness News about those efforts.

"He told us, 'hit the floor, get on the ground' and he started handing out gas masks." Congresswoman Norma Torres shares her traumatic first-hand account of just what happened when pro-Trump far-right extremists stormed the Capitol building in a dark day for democracy.

When asked why it's important to have the president removed so close to Inauguration Day, Aguilar said Trump still poses a "clear and present danger."

"I think we all agree with that. It would be easiest if he just left, that's what we would all prefer but if he's not going to leave and the vice president doesn't have the moral fortitude to invoke the 25th Amendment, which we're encouraging him to do, then we're going to have to use the only tool available at that point and that's to proceed with impeachment."

"Just because he lost his microphone on Twitter, doesn't mean he isn't dangerous," he added.

One day after violence erupted on Capitol Hill, Congresswoman Karen Bass called for the 25th Amendment to be invoked in an effort to remove President Trump from office.

Some Republicans in Congress have said the president should not be impeached in the interest of unity and healing for the nation.

"You can't have unity without accountability. That's what we're seeking here. The president has to be accountable for the actions. He incited an insurrection and many of the individuals who came wanted us killed. That's hard to wrap your head around but we can't just hold hands now, which I hope we can at some point, without some consequences and without some accountability."

Trump faces a single charge - "incitement of insurrection" - in the impeachment resolution that the House will begin debating Wednesday, a week before Democrat Joe Biden is set to be inaugurated, Jan. 20.

Watch the full interview at the video above. The Associated Press contributed to this report.