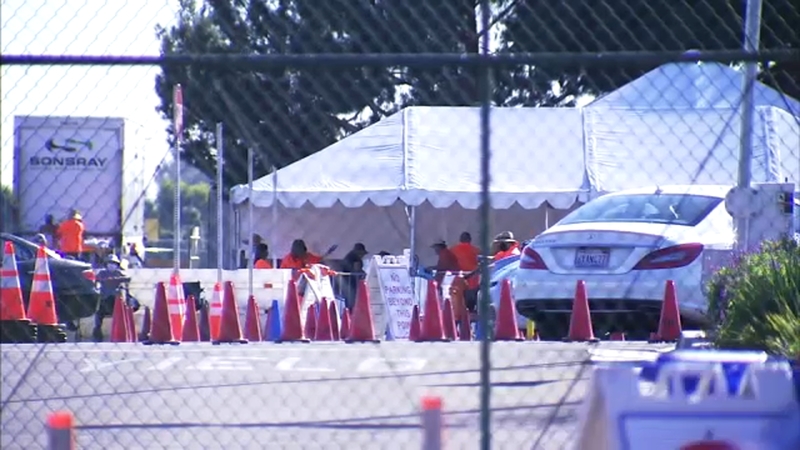 ANAHEIM, Calif. (CNS) -- With high winds and elevated fire danger in the forecast, the COVID-19 vaccination site at Disneyland will be closed Tuesday and Wednesday, dealing a temporary blow to efforts to accelerate the distribution of vaccines.

People who had appointments to receive vaccinations at the site on Tuesday will be notified of rescheduled times, according to the agency. There were no scheduled appointments for Wednesday.

The county's Othena.com app and website, where residents can get vaccination information and make appointments to get inoculated at the Disneyland mega-site, have been heavily used since going online last week. The website hits and downloads of the app topped 100 million combined this week, Orange County CEO Frank Kim said.

The county on Thursday opened up 3,600 appointment slots for Sunday, and they were all taken in 13 minutes, he said.

On Friday, some of the residents being inoculated at Disneyland were given a ticket so staff could track how long it took them to get through the process. What was taking an hour or two on Wednesday was down to 42 minutes on Friday, Kim said.

"I was really happy we got it under an hour," he said. "That means we can start increasing capacity."

The county will hire about 120 temporary workers to help with staffing, Kim said. Another team is working on recruiting and screening volunteers.

Officials are also working out the bugs on the app, adding that a new version awaiting Apple's approval is expected to address the most common concerns and issues.

"We think the majority of the issues are behind us now," Kim said.

Dr. Clayton Chau, the county's chief health officer and OCHCA director, said seniors 65 and older were moved to the front of the line for vaccines this week, immediately following the state's modified guidelines. He noted that a survey showed 54% of the COVID-19 patients hospitalized in 13 OC hospitals are 61 and older and 71% in ICUs are 61 and older. Nearly 72% of those on a ventilator are 61 and older.

"Seventy-five percent of those who have died in Orange County are also seniors, aged 65 or over," Chau said Tuesday.

For the past two weeks, the county has set up pop-up clinics to bring vaccines to "high-density pockets of seniors'" in the community, Kim said.

Orange County expects to spend between $60 million to $70 million on the Super POD vaccine sites, he said. Ultimately, the county wants to have up to five of the mega-sites and to place them regionally throughout the county with the next one either on the north end or the south end.

But first, the county wants to stabilize the Disneyland site and have enough trained volunteers committed to staffing it before opening a second one, which would be backfilled by staff in case volunteers do not show up for work.

The county is expecting 35,000 more doses this week, Chau said, and is handling distribution of about 20% of the doses sent from the state, with health care providers doling out the rest.
Report a correction or typo
Related topics:
health & fitnessanaheimorange countywindcoronavirusdisneylandcovid 19 vaccinecovid 19 pandemiccovid 19
Copyright © 2021 by City News Service, Inc. All Rights Reserved.
COVID-19 VACCINE

Masks could prevent up to 14K COVID deaths by August, model predicts