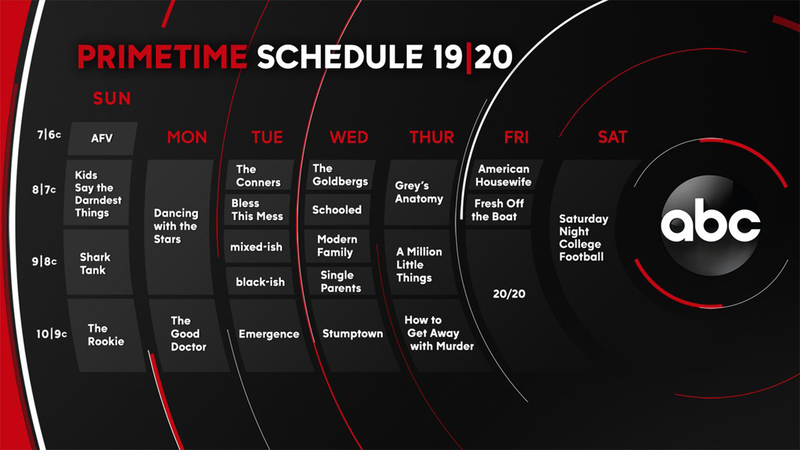 NEW YORK -- In her inaugural upfront presentation as president of ABC Entertainment, Karey Burke unveiled a slate of programming for the 2019-2020 season that is bolstered by the strength of established, fan-favorite shows and captivating new programs energized by bold characters and storytelling.

There will be newcomers, notably Tiffany Haddish, and inevitable cancellations. But ABC said next season represents the lightest hand in more than a decade.

"Viewers love our shows and we are listening to the audience," Burke said. "So this year, we're not trying to jam them with too many messages and too many new shows to watch."

Although ABC had a "tough" start last fall, she said, a ratings rebound since January justifies the approach.

"Going into next season, our priorities are stability and launching shows in a way our audience will know we are committed to them," she said. "Add to that some of the most buzzed-about titles and top talent of the recent pilot season, and we have an enviable combination that sets the stage for us to win with women and grow our overall reach."

That means nurturing the shows in place, such as long-time ABC successes "Grey's Anatomy" and "The Bachelor" and not "putting on something new for the sake of something new," she said. A marketplace increasingly packed with streaming content is another reason to hold steady, Burke said.

Three new scripted series will debut in the fall - dramas "Emergence" and "Stumptown," and the "black-ish" comedy spinoff "mixed-ish" - a remarkably fewer number, thanks to the consistent viewership that many of ABC's current shows continue to offer.

Here are the trailers for the new fall shows.

In the current season, ABC claims six of the Top 20 broadcast entertainment shows, including two of the top four dramas - "Grey's Anatomy" and "The Good Doctor" - and the No. 1 new comedy, "The Conners" - all of which will return in the fall.

"A Million Little Things," which grew viewership following its move to Thursday nights and ranks No. 17 among the Top 20, will also return in the fall, along with the highly anticipated 11th and final season of one of TV's most celebrated comedies, "Modern Family," which rounds out ABC's entries on the Top 20 list at No. 19.

Additionally, fan favorites "America's Funniest Home Videos," "American Housewife," "American Idol," "The Bachelor," "black-ish," "Bless This Mess," "Dancing with the Stars," "Fresh Off the Boat," "The Goldbergs," "How to Get Away with Murder," "Marvel's Agents of S.H.I.E.L.D.," "The Rookie," "Schooled," "Shark Tank," "Single Parents" and "Station 19" will return next season, as previously announced.

The midseason entries include the dramas "For Life," about a prisoner seeking freedom for himself and others, with Curtis "50 Cent" Jackson among the producers, and "The Baker and the Beauty," about the unlikely romance between a working man and a superstar.

The family comedy "United We Fall" also is on deck for midseason.

ABC's fall prime-time schedule is as follows (all times listed are Eastern/Pacific). New shows are in bold.

The host of late-night's "Jimmy Kimmel Live!" has signed on for three more years, Burke announced.

The new deal means that "we'll be able to celebrate 20 years together with Jimmy," she said.

He may not be required to rescue ABC from a repeat of this year's no-host Oscars. When controversy drove Kevin Hart from the job, the ceremony failed to woo a replacement and let presenters carry the show.

Although Burke was noncommittal about 2020, she expressed satisfaction with the ceremony and its ratings.

"We're extremely proud of how the show turned out creatively and how well it performed this year," she said. "I think you'll see us not messing with that formula, to the best of our abilities."

Asked if that meant two-time Oscar host Kimmel wouldn't be conscripted, Burke stopped short of ruling it out.