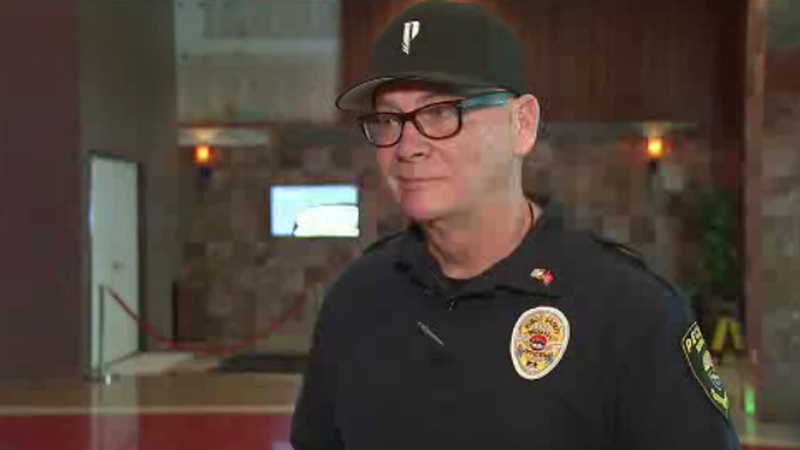 TEMECULA, Calif. (KABC) -- Wherever they go, John Tipton and his service dog, Daisy, are sure to attract attention and a crowd.

Four days a week the duo patrols the grounds of the Pechanga Resort and Casino in Temecula.

It's a job Tipton would not have been able to do three years ago as he struggled with debilitating post-traumatic stress.

"In 2015 is when I finally sought help for PTSD issues related to my time in the Marine Corps. I'd been unemployed for three years," Tipton said.

Last December, he got a call from an old friend with an opportunity to join Pechanga's newly minted six-legged security force. It's a program that offers veterans and their service dogs a job.

The man behind the idea is Robert Krauss, a former Marine himself. "It helps them assimilate back into the workforce. It gives them an opportunity to work," Krauss said.

The job has given Tipton a new lease on life along with a reason to get up and get moving.

While Tipton and Daisy are the human and canine team at Pechanga, the resort and casino says they hope to expand their team to include 10 more just like them.

"If other employers in the area and everyone around here takes a look at this and what positive impact something like this can do for your organization, I think it is a win-win for everybody," Krauss said.

It's a win-win for visitors and other employees, like Robert Montclair, who is also a retired Marine. For him, Daisy is like any other member of the security team with one exception -- she likes to have her tummy rubbed.

"There have been multiple occasions where I've had not-so-great of a day and I will come in and Daisy will greet me. She bypasses everyone and basically says hi," Montclair said.