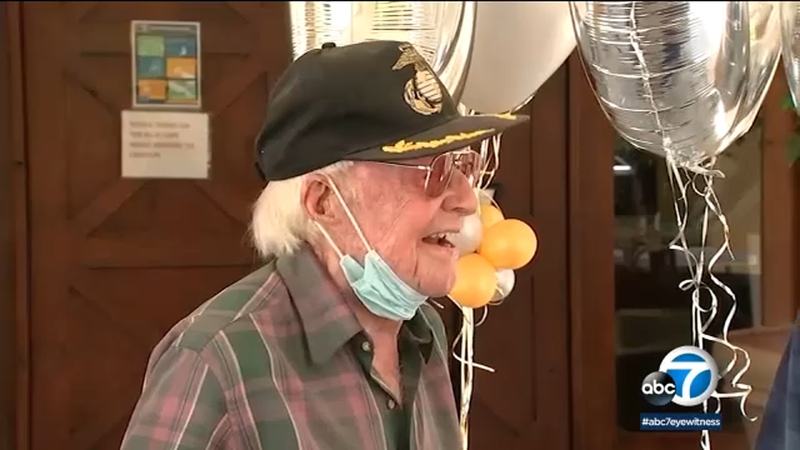 SHERMAN OAKS (KABC) -- A decorated World War II veteran is celebrating his 100th birthday, but that's not the only thing the Marine Corps veteran has achieved.

Lt. Col. Sam Folsom's extraordinary life has caught the attention of a TV and documentary producer.

For his service and sacrifice during the Guadalcanal Campaign, Lt. Col. Folsom was awarded the Distinguished Flying Cross and the Purple Heart. While Folsom is a living part of history, he is one of the last surviving World War II Marine Corps combat pilots.

"All the people that he knew that we knew together friends they are gone," said his wife, Barbara Folsom.

And as one of the few remaining WWII veterans still living, Folsom's story has captured the attention of Hollywood. TV producer and friend Steve Barber is working on a documentary about Folsom's 18-year career as a fighter pilot.

"Two years ago, Sam was walking across the street with that very hat on. I've done some Marine movies with Kelsey Grammer and Ed Harris and I raced after him and said were you a Marine? And he said I am a Marine!" said Barber.

The filmmaker was on hand at the assistance living center in Sherman Oaks where Folsom and his wife of 69 years reside, to help celebrate a century's worth of living.