The Navy's first Black admiral was honored at a ceremony during a Black History Month celebration in San Pedro at the USS Iowa, a retired battleship he served on during the Korean War.
KABC
By Leo Stallworth 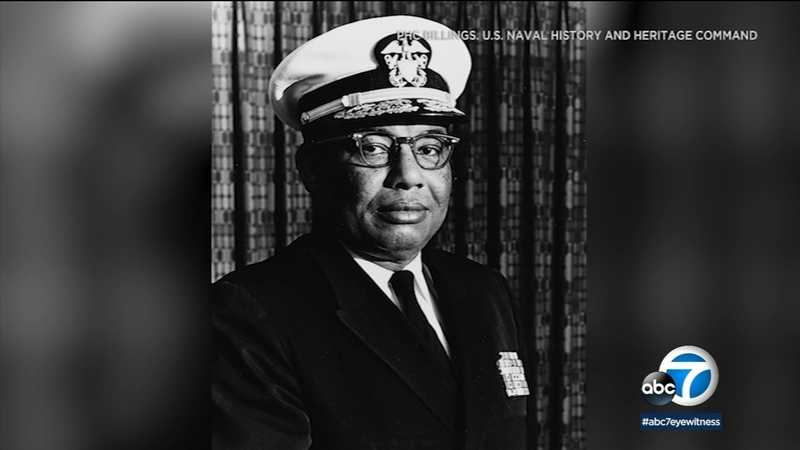 ABC7 Salutes the legacy of a trailblazing career Navy Officer

SAN PEDRO, Calif. (KABC) -- Samuel L. Gravely Jr. was the first African American in the U-S Navy to become an admiral, and the first to command a fleet: Accomplishments he earned during a time of great racial division within the armed services.

Despite a mountain of pitfalls dating back to WWII, Admiral Gravely remained steadfast in his zest to rise through the ranks of the U.S. Navy eventually earning the distinction of admiral in 1976.

Military historian Paul Stillwell says he stumbled across a magazine article about Admiral Gravely and became enthralled with the man's story. Even co-authoring the admiral's biography.

"By his excellence in performance, he achieved so much that enabled others to succeed after him," said Stillwell. "I thought, this is a revelation, I've never heard of a Black commanding officer in the U.S. Navy."

Stillwell says Admiral Gravely earned the respect of even his distractors during his brilliant leadership in the Vietnam War.

"He commanded the destroy leader, a guided missile frigate Jewett in the Vietnam War did so expertly," said Stillwell.

The admiral became such a distinguished naval officer and gentlemen that he was invited to a special ceremony at the White House.

"January 1, 1963, was the 100th year anniversary of Lincoln signing the Emancipation Proclamation," said Stillwell. "Gravely was invited to the White House for the ceremony, meeting at that time President John F. Kennedy."

Admiral Gravely, who passed away in 2004, was honored at a ceremony during a Black History Month celebration in San Pedro at the USS Iowa -- a retired battle ship he served on during the Korean War. The ceremony offered young people an opportunity to learn about this incredible man.