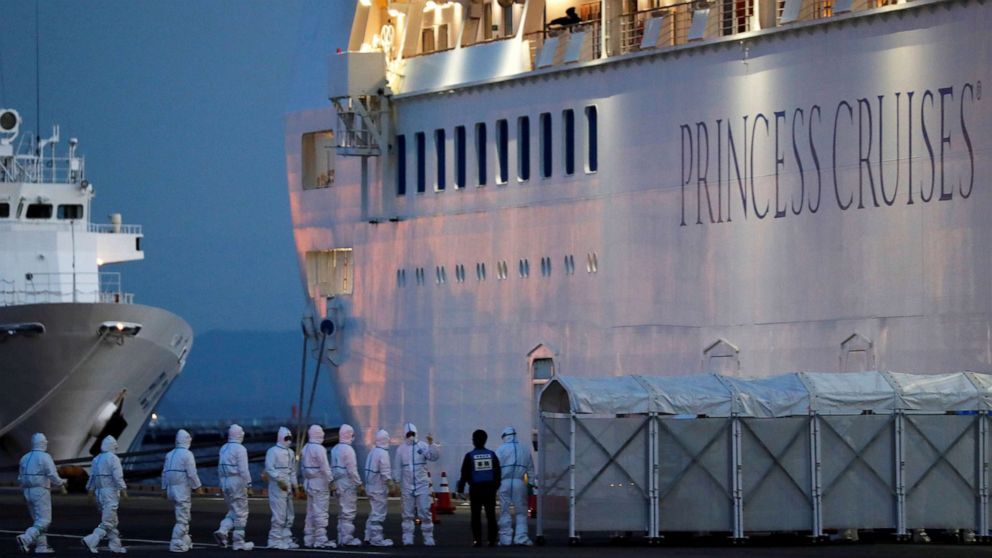 ABCNews
By MORGAN WINSOR
At least 11 Americans are among the dozens of people aboard a cruise ship moored in Japan who have tested positive for the novel coronavirus, officials said.

Since arriving at the Japanese port of Yokohama on Monday, the Diamond Princess has been quarantined at sea while all passengers and crew undergo health screenings. At least 61 people have tested positive for the newly identified coronavirus. The patients, who include elderly people and foreign nationals, were taken ashore to a hospital in the coastal prefecture of Kanagawa, according to Japan's Ministry of Health, Labor and Welfare.

The news came amid a flurry development in what has become a global health crisis:

-- Royal Caribbean International announced that any of its passengers holding a Chinese, Hong Kong or Macau passport will not be allowed to board its cruise ships "regardless of when they were there last." The cruise line also said it was banning any passengers who have been in close contact with someone that has "traveled from, to, or through mainland China, Hong Kong, or Macau less than 15 days."

-- New Jersey Gov. Phil Murphy said that four passengers on a Royal Caribbean cruise ship returning from the Bahamas that docked in Bayonne, New Jersey, on Friday morning were taken to a hospital to be evaluated for the coronavirus. Murphy said the passengers were among 27 who recently traveled from mainland China and were screened aboard the ship by personnel from the Centers for Disease Control and Prevention. He said the other 23 passengers who were examined were cleared by the CDC. He said the New Jersey Department of Health will facilitate the specimen collection and the samples will be sent to the CDC for testing.

-- World Health Organization officials said that as of Friday morning the death toll from the coronavirus increased overnight in China from 564 to 636 and that 31,203 other people in the country have been diagnosed with the virus. More than 220 additional people in 28 other countries have contracted the virus, including 12 cases in the United States, according to WHO. Most of those individuals recently had traveled to China.

-- The White House released readouts of a phone call President Donald Trump had with Chinese President Xi Jinping on Friday morning. During the conversation, Trump expressed confidence in the Chinese government to fight the outbreak, according to the readouts. Xi told Trump that he has "full confidence" in his country's capability to defeat the virus.

A spokesperson for Princess Cruises, which operates the ship docked in Yokohama, told ABC News that those infected include 28 Japanese nationals, 11 Americans, seven Australians, seven Canadians, three people from Hong Kong, one person from Argentina, one from the Philippines, one from Taiwan, one from the United Kingdom and one person from New Zealand.

The Japanese government has mandated the Diamond Princess and all those still on board to remain under quarantine at sea until Feb. 19.

"The Japanese government is also providing our ship and team members additional manpower support," a spokesperson for Princess Cruises said in a statement Thursday night. "During the remainder of the time onboard, guests will continue to be provided complimentary internet and telephone service to stay in contact with their family and loved ones. In addition, we have added additional live TV channels and a large selection of in-room movies available in multiple languages. The cruise activities staff is packaging games, puzzles and trivia and delivering them to guest staterooms."

There are 2,666 guests and 1,045 crew members aboard the Diamond Princess. Approximately half are from Japan, with more than 400 passengers from the United States, according to the cruise line spokesperson.

Speaking to ABC News on Friday morning from their cabin suite aboard the Diamond Princess, U.S. citizens Roger and Karey Maniscalco described the conditions and mood on the ship as "somber" and "quiet."

"I think everybody is still initially in shock," Karey Maniscalco said. "Everybody's still in their rooms."

"It's been tough," her husband, Roger, added.

Apart from being confined to their 211-square-foot room, the couple said they are feeling "absolutely fine" and "healthy."

The Maniscalcos told ABC News that passengers have been given thermometers to self-monitor their temperatures throughout the day and must report any temperature above 37.5 degrees Celsius. Anyone who is granted access outside their room must wear a mask and gloves.

The World Health Organization has declared the outbreak a global health emergency.

Two newborns in China are believed to be the youngest to contract the novel coronavirus. The infants, one just 30 hours old, tested positive for the newly discovered virus on Wednesday at a children's hospital in Wuhan, the outbreak's epicenter, according to the state-owned China Daily newspaper.

Both babies were reported in stable condition, but now concerns have been raised over whether mother-to-fetus transmissions are possible.

Meanwhile, a Chinese doctor who was reprimanded by authorities for sounding an early warning about the outbreak in Wuhan at the end of December died Friday after falling ill with the disease. The Wuhan Central Hospital said on its social media account that Dr. Li Wenliang, a 34-year-old ophthalmologist, was "unfortunately infected during the fight against the pneumonia epidemic of the new coronavirus infection."

"We deeply regret and mourn this," the hospital added.

The WHO took to Twitter in light of the doctor's death, saying, "We all need to celebrate work that he did."

Speaking at a press conference in Geneva on Thursday, WHO Director-General Dr. Tedros Adhanom Ghebreyesus said there are still many unknowns about the virus. Scientists are working to find the original source of the outbreak, and they still don't fully understand how the virus is transmitted nor its severity.

"To put it bluntly: we're shadowboxing," Ghebreyesus told reporters. "We need to bring this virus out into the light so we can attack it properly."

The new coronavirus causes symptoms similar to pneumonia -- sometimes mild, such as a slight cough, to more severe, including fever and difficulty breathing, according to the CDC. There is no vaccine yet for the virus, nor any known effective therapeutics.

In the United States, 12 confirmed coronavirus cases have been reported in Wisconsin, California, Washington, Arizona, Massachusetts and Illinois. The U.S. Centers for Disease Control and Prevention has shipped newly approved coronavirus tests to labs across the country so states can begin their own diagnostic testing instead of shipping all samples to CDC headquarters in Atlanta.

The outbreak has caused several major U.S. airlines to suspend all flights to China, and American companies and government agencies have evacuated staff from the country. The U.S. Department of State issued a Level 4 travel advisory for China on Jan. 30, warning people to avoid all travel to the country.

The passengers being evaluated for the disease who were on the Royal Caribbean ship that docked Bayonne, all Chinese nationals, were experiencing breathing problems and other pulmonary issues aboard the Anthem of the Seas, according to a federal official, who noted that there's no indication the passengers are infected with the new coronavirus and the response was out of an abundance of caution.

Royal Caribbean said in a statement that one of the passengers screen tested positive for Influenza A. The cruise line said its records showed that the other passengers evaluated had not been in China since Jan. 26.

"We have also been cleared by authorities to depart, as usual. However, to reassure concerned guests, we will delay our departure until tomorrow, when we will receive the conclusive test results from CDC," the Royal Caribbean statement reads.

A spokesperson for Royal Caribbean told ABC News, "Like airlines, we are participating in elevated levels of guest screening to check the spread of coronavirus. We are closely monitoring developments regarding coronavirus and have rigorous medical protocols in place onboard our ships. We continue to work in close consultation with the CDC, the WHO and local health authorities to align with their guidance and ensure the health and wellbeing of our guests and crew."

Two people briefed on the matter told ABC News that the four people being evaluated have been taken to University Hospital in Newark.

"The hospital is following proper infection control protocols while evaluating these individuals," Gov. Murphy said. "New Jersey currently has no confirmed cases of novel coronavirus and the risk to residents remains low."

Meanwhile, the U.S. Department of State has identified about 1,000 Americans in China's Hubei Province, which includes Wuhan, who have requested help in evacuating, according to Capt. Jennifer McQuiston, deputy director of CDC's Division of High Consequence Pathogens and Pathology. A number of U.S. citizens have already been evacuated from China in recent days.

In a series of tweets early Friday morning, President Donald Trump said he had a "long and very good" telephone conversation with Chinese President Xi Jinping.

"He is strong, sharp and powerfully focused on leading the counterattack on the Coronavirus," Trump said. "He feels they are doing very well, even building hospitals in a matter of only days."

"Great discipline is taking place in China, as President Xi strongly leads what will be a very successful operation," Trump added in another tweet. "We are working closely with China to help!"