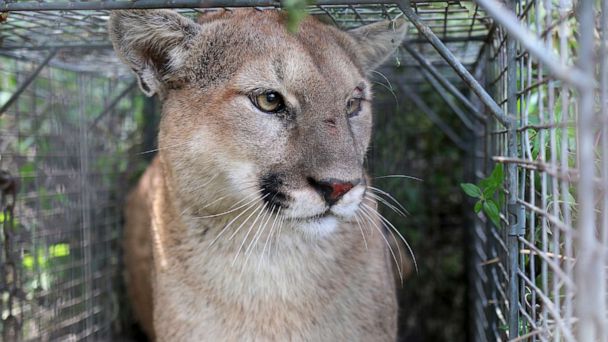 A radio-collared mountain lion living in the western Santa Monica Mountains has been shot and killed by a landowner, the first under a California law that allows the "specially protected" species to be killed if it harms pets or livestock.

The cougar, known as P-56, was fatally shot on Jan. 27 after a property owner who had lost a dozen animals received a depredation permit from the California Department of Fish and Wildlife, the National Park Service said in a press release Monday.

The hunting of mountain lions, which are designated by the state as a "specially protected mammal," has been banned in California since 1990. However, a property owner can request a depredation permit to kill the large cat if it has killed or injured livestock or pets, according to the National Park Service.

In December 2017, the California Department of Fish and Wildlife implemented a "three-strike" policy that adds protection to the cougar populations in the Santa Monica Mountains and the Santa Ana Mountains, where there is another isolated at-risk population. In these areas, a landowner must first use non-lethal means to deter the mountain lion before a depredation permit is issued, according to the National Park Service.

The property owner in this instance had nine depredation incidents resulting in the loss of 12 animals over two years. Even though the incidents involving P-56 took place beyond the boundary of the current geographic area for the three-strikes policy, the landowner implemented measures "including bringing in as many livestock as possible, penning any remaining livestock close to the barn and houses, and utilizing trained guard dogs, hot wire fencing, motion activated lights and auditory (radio) hazing," the National Park Service said in the press release, citing officials at the California Department of Fish and Wildlife who had investigated the depredation incidents.

P-56, a 4-to-5-year-old male cougar that roamed the most western end of the Santa Monica Mountains, was first caught and collared with a GPS-tracking device in April 2017. He's believed to have fathered a litter of four kittens in July 2018.

Mountain lions in the Santa Monica Mountains have been a part of a nearly 18-year-long study by the National Park Service that looks at how the small population is faring in a highly fragmented region. Although the National Park Service is conducting research on the local cougar population, the California Department of Fish and Wildlife is responsible for managing the state's wildlife, including mountain lions.

With the killing of P-56, there is now only one adult male mountain lion in the Santa Monica Mountains that the National Park Service is tracking as part of its research.

"The loss of a breeding male is a concern for the study, especially when the population is already very small, Jeff Sikich, the study's lead field biologist, said in a statement Monday. "There are always animals out there that are not being tracked."

The California Department of Fish and Wildlife has a number of recommendations on its website for keeping cougars wild and eliminating depredations, such as confining livestock in a full enclosure at night, using properly trained guard dogs and keeping domestic pets indoors at night or, if outside, keeping them in a mountain lion-proof enclosure.
Report a correction or typo
Related topics:
abc newsnational
Copyright © 2020 ABC News Internet Ventures.
More Videos
From CNN Newsource affiliates
TOP STORIES