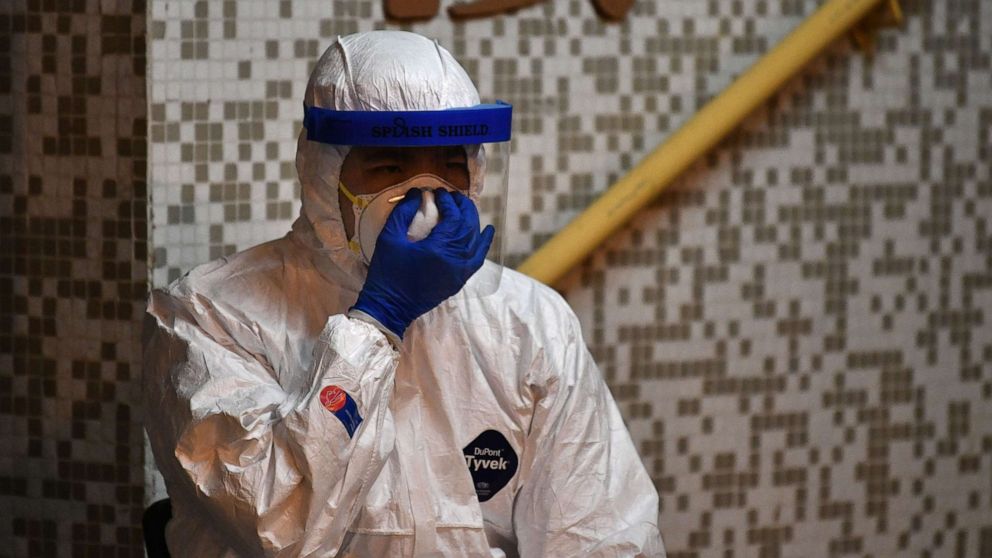 ABCNews
By MORGAN WINSOR
A 13th American was diagnosed with the novel coronavirus on Monday as the death toll in China topped an ominous 1,000 with health officials struggling to contain the epidemic.

The American tested positive for the disease in San Diego, a U.S. Centers for Disease Control and Prevention spokesperson confirmed to ABC News on Monday evening. The patient had arrived from China on the first evacuation flight to Marine Corps Air Station Miramar in San Diego. The flight landed at the military base on Feb. 5 and the passengers were to be quarantined for 14 days.

Four patients under observation, who had previously tested negative, were taken for further testing Monday morning, with one now testing positive, according to the CDC. Another patient taken to UC San Diego Health still has test results pending. Both patients were "doing well and have minimal symptoms," the CDC said.

There had been 12 previously confirmed coronavirus cases in the United States, in Arizona, California, Illinois, Massachusetts, Washington and Wisconsin. The CDC has shipped newly approved coronavirus tests to labs across the country so states can begin their own diagnostic testing instead of shipping all samples to the agency's headquarters in Atlanta.

The last confirmed case of the novel coronavirus in the United States had been Feb. 5 in Wisconsin.

China's National Health Commission said on Tuesday that a total of 42,638 people have been infected in the country and 1,016 of them have died, with the death toll crossing 100 in a day for the first time. There were 108 deaths on Monday alone, including 103 in Hubei province, where the newly identified virus first emerged.

Beyond China, an additional 319 people have been infected in 24 other nations, including 12 new cases in the past day, according to the World Health Organization. Only one patient has died outside of China -- a 44-year-old man in the Philippines -- bringing the global death toll to 1,017, which exceeds the number of people killed in the 2002-2003 SARS outbreak.

The Untied Kingdom's Department of Health and Social Care declared the virus "a serious and imminent threat" on Monday and put new quarantine restrictions in place in an attempt to delay or stop the spread of the disease.

Effective immediately, any individual public health professionals consider to be at risk for spreading coronavirus will be subject to a 14-day quarantine. Those restrictions only apply in England.

"I will do everything in my power to keep people in this country safe," British health secretary Matt Hancock said in a statement Monday. "We are taking every possible step to control the outbreak of coronavirus."

The new rules came after a WHO news conference on Monday in which top health officials called reports of human-to-human spread of coronavirus in France "concerning."

The transmissions, which occurred at a ski resort in France, are worrying instances of "onward transmission from people with no travel to China," said WHO director general Dr. Tedros Adhanom Ghebreyesus.

"The detection of a small number of cases could be the spark that becomes the bigger fire," he added. "But for now, it's only a spark."

The WHO will convene in Geneva for a global research and innovation forum Tuesday to identify the gaps in scientists' knowledge about coronavirus and to accelerate the development of interventions to stem the spread of the disease.

At the same time, an advanced team from WHO will begin its work in China. The international team will work with Chinese experts on the ground to investigate the origins and severity of the new coronavirus.

The overall pattern for coronavirus remains stable. Eighty percent of cases are mild and about 15% require hospitalization, Tedros explained. Roughly 3% to 5% of people will need intensive care and 2% of cases are fatal.

Since 99% of cases have been in China, however, those statistics may not hold steady if the disease were to spread to a country that has a weaker public health system than China does -- a possibility that WHO officials have repeatedly warned about.

"This disease may appear relatively mild in the context of a sophisticated health system," said Dr. Mike Ryan, executive director of WHO Health Emergencies Program. "This may not be the case if it reaches a weaker health system."

To head off that frightening prospect, the WHO is mailing testing kits to Cameroon, Cote d'Ivoire, the Democratic Republic of the Congo, Egypt, Ethiopia, Gabon, Ghana, Iran, Kenya Morocco Nigeria Tunisia, Uganda and Zambia. The Africa Centers for Disease Control and Prevention is also conducting diagnostic testing training in Senegal and South Africa.

Father and daughter released from hospital at Miramar airbase

In the meantime, the Americans who were evacuated from Wuhan, China, are experiencing life under quarantine.

Frank Wicinski and his 3-year-old daughter Annabel spent two days in the hospital under observation after landing at Miramar airbase last week. While both father and daughter were cleared for having coronavirus and can leave the base after their 14-day quarantine ends, Wicinski's wife, Li Qiong, remains in China, where she is caring for her father, who has a severe coronavirus case.

"[My wife] was told by the doctors, 'Your father is dying and probably has one to two days left,'" Wicinski told San Diego ABC affiliate KGTV.

In recent days, Li Qiong was also diagnosed with coronavirus.

"I feel like I should've stayed that I could've," Wicinski said. "I mean, on the one hand, I know getting Annabel out of there was the right thing to do. But she's my wife, and I love her."

U.S. citizen Rebecca Frasure has been in the isolation ward of a Tokyo hospital since Friday.

Frasure and her husband were supposed to be enjoying themselves on a cruise around Asia but she's now among the 135 people aboard the Diamond Princess who have tested positive for the novel coronavirus.

"I haven't seen the outside of my room since I got here," Frasure told ABC News in a telephone interview from her hospital room on Monday. "Just never think that something like this is going to happen when you're just on vacation, living life. So, yeah, it was pretty shocking."

The cruise ship has been quarantined at sea in the Japanese port of Yokohama since arriving there on Feb. 3, according to Japan's Ministry of Health, Labor and Welfare. All those infected with the newly discovered virus have been brought ashore for treatment, while the other passengers -- including Frasure's husband -- remain confined to their rooms on board until the quarantine period ends.

"He's holding up fine. You know, it's difficult to be separated in this way," Frasure said of her husband. "We're just kind of taking it in stride and FaceTiming and such as we can."

Princess Cruises, which operates the ship, announced Sunday that it is offering a full refund to all 2,666 guests on board. More than 400 passengers are from the United States, and at least 23 of them have been infected with the disease, according to a Princess Cruises spokesperson.

The new coronavirus causes symptoms similar to pneumonia, ranging from mild, such as a slight cough, to more severe, including fever and difficulty breathing, according to the CDC. There is no vaccine yet for the virus, nor any known effective therapeutics.

Frasure, who lives with her husband in Forest Grove, Oregon, said she feels "fine" apart from a slightly stuffy nose. She said the most severe symptoms she experienced from the virus were a mild fever and cough, both of which have since resolved.

"It doesn't even feel like a cold," she told ABC News. "To be perfectly honest, I wouldn't have known that there was anything wrong with me if they hadn't tested me."

"I don't think that there's any reason to spread panic," she added. "I think that people just need to be aware and, you know, practice good hygiene."

The WHO has declared the outbreak a global health emergency.

The epicenter is in the central Chinese city of Wuhan, where the first cases of the new coronavirus were detected back in December. A 60-year-old American man who tested positive for the disease died at a Wuhan hospital last week, a U.S. Embassy spokesperson told ABC News. He's the first U.S. citizen to die after being diagnosed with the newly identified virus.

A number of Americans have been evacuated from China in recent weeks, and the U.S. Department of State has identified dozens more who have requested help in evacuating from the Chinese province of Hubei, which includes Wuhan.

The outbreak has caused several major U.S. airlines to suspend all flights to China, and American companies and government agencies have evacuated staff from the country. The U.S. Department of State issued a Level 4 travel advisory for China on Jan. 30, warning people to avoid all travel to the country.

New York residents Milena Basso and Guy Cerullo are among the thousands of people aboard the Diamond Princess cruise ship quarantined in Japan. The couple, who are on their honeymoon, said they're trying to remain in good spirits but the increasing number of infected passengers is concerning.

"It's just slowly creeping up," Basso told ABC News in a telephone interview Monday. "It's making us think, like us being on here, we're just prone to this scenario to happen. That's what's really worrying us."

Like all other passengers on board, the newlyweds are confined to their room. They are provided with three meals a day, free internet and access to counseling services.

Passengers are also allowed access to the ship's upper deck during scheduled break times while wearing masks and gloves, but Basso and Cerullo said they don't want to risk it. The couple have even stopped allowing crew members into their room to clean up.

"I'd rather go mentally crazy than catch the virus," Basso told ABC News. "It'll be worth it in the end for us to just get home, to be healthy and clean, and that's it."