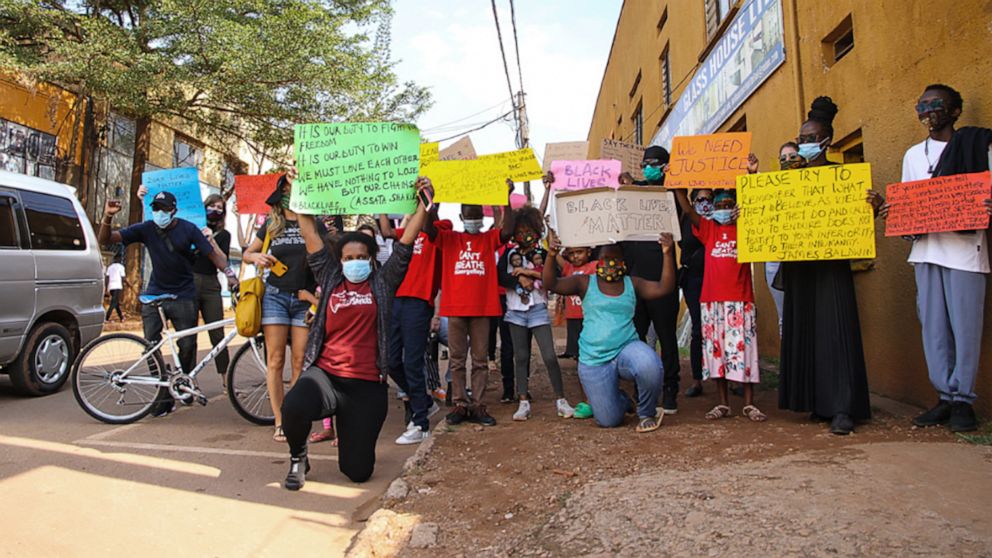 KAMPALA -- Several Americans were among those arrested during an anti-racism protest in Uganda's capital on Tuesday, police said.

A total of 15 people -- mostly foreign nationals -- were taken into custody amid the small demonstration in Kampala. They face charges of holding an unlawful assembly and committing a negligent act likely to spread infection of disease, according to Kampala Metropolitan Police deputy spokesperson Luke Owoyesigyire.

"Some were French, some were Belgium, some were American," Owoyesigyire told ABC News, without providing a specific breakdown.

The protesters were rallying against racism and police brutality in the wake of the death of George Floyd, an unarmed black American man who died in Minneapolis on May 25 after a white police officer knelt on his neck as three other officers stood by. The incident has sparked widespread outrage, protests and calls for police reform across the United States and around the world, reigniting the Black Lives Matter movement.

U.S. citizen Kelsey Nielsen, 30, who lives in Kampala, told ABC News she was among five Americans who were arrested at Tuesday's demonstration, along with seven other foreign nationals and three Ugandans.

"This just highlights how much more offensive, globally, it is to stand up for black lives and black liberation than it is for us to hold perpetrators of anti-black violence accountable," she said.

Nielsen said she has been closely following the injustices that black people face in the United States and worldwide, so she felt compelled to speak out on the issue. The Kampala-based advocacy group she co-founded, No White Saviors, organized Tuesday's protest.

Nielsen told ABC News she wasn't aware of Uganda's law against protests and public gatherings, and that police moved in as the number of attendees quickly grew.

Another No White Saviors co-founder, 32-year-old Ugandan national Olivia Alaso, was also arrested during the protest, according to Nielsen.

Photos and video footage from Tuesday's event show a peaceful demonstration, with many attendees wearing face masks and holding signs that say "Black Lives Matter." Police officers are seen taking several protesters into custody and putting them in the back of police trucks. The arrestees were all taken to Kabalagala Police Station, where Nielsen said they were detained for more than four hours.

They were released on bond and must report back to the police station Friday morning, according to Owoyesigyire.