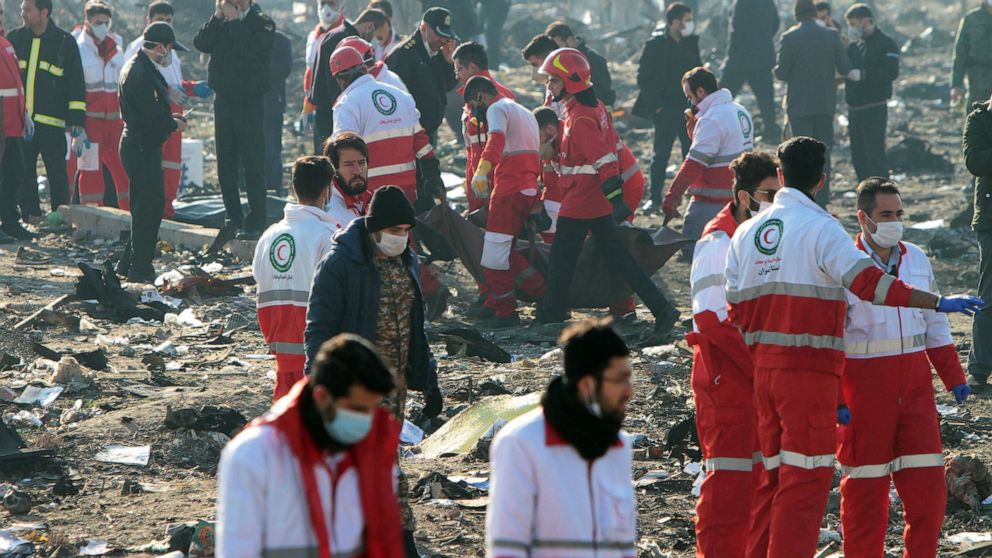 ABCNews
By MINA KAJI
A Ukrainian passenger plane carrying 176 people crashed shortly after taking off from Tehran, the capital of Iran, Wednesday morning, killing all on board.

The crash occurred about three hours after Iran fired multiple missiles into Iraq, targeting U.S. military sites in what appeared to be retaliation for the recent American drone strike that killed one of its top generals.

There was no immediate sign, however, that the two events were linked. Iranian officials blamed the crash on a technical fault on the plane, although the cause of the disaster still remained unclear on Wednesday.

The Boeing 737-800 airliner bound for Kyiv took off at 6:12 a.m. from Tehran's Imam Homeini International Airport but got into trouble just two minutes into the flight, according to flight trackers.

Footage aired on Iranian television and released by the Iranian Red Crescent showed the plane's wreckage scattered across a field in small fragments. Iranian officials told state media there was no chance anyone survived.

Ukraine's Foreign Minister Vadym Prystaiko said among the dead, 82 were Iranian and 68 were Canadian citizens. Eleven Ukrainians were killed, among them the airliner's nine crew members, he said. Ten other passengers were from Sweden, four from Afghanistan, three from Germany and three from Britain, according to the minister.

Mansour Darajati, an official at Tehran's governor's office, however, told Iranian state media that the number of Iranians killed in the crash was around 140. It is possible that many of the victims held dual passports.

A flight manifest released by the airline showed there had been at least 25 children on board, including several under the age of 10.

Ukraine's President Volodymyr Zelenskiy broke off a visit to Oman on learning of the news, issuing a statement to express his condolences to the friends and families of those killed.

It is unclear what caused the crash and speculation almost immediately arose that it could be linked somehow to the overnight missile crisis. Some speculated the plane was accidentally shot down by Iranian air defenses on alert for possible retaliation from the United States.

No evidence so far, however, has emerged to support that. Iranian authorities quickly said the plane had suffered an engine fire due to a technical problem and rejected that it could have been struck by a missile.

"The engine had caught fire. If the reason of the crash was missile, then it would explode in the sky. But the fire was in the plane engine and the pilot's attempt to control the plane was unsuccessful," Qassim Biniaz, a communications chief at the Iranian Ministry of Roads and Transport, told the state news agency IRNA.

The plane's flight data stopped abruptly two minutes after take-off, the flight tracker Flightradar 24 showed. The head of Iran's Civil Aviation Authority, Ali Abedzadeh, told the semi-official Mehr News Agency the pilot had not contacted the airport control tower to alert it of any problems.

Ukraine's embassy in Tehran initially issued a statement confirming the Iranian version that it had been an engine fire but then later deleted it. Ukrainian officials have since said it was too early to rule anything out.

Asked at a briefing in Kyiv about the possibility that the plane might have been accidentally shot down, Ukraine's Prime Minister Oleksiy Honcharuk cautioned against speculation and asked people to wait for the results of the official investigation.

Iranian investigators said they had recovered the plane's "black box" flight recorder on Wednesday and were studying it. Late Wednesday evening, the state-run Iranian Students News Agency (ISNA), published alleged new details that it said were from investigators, suggesting that the plane had crashed while attempting to turn back towards the airport to make an emergency landing. It said witnesses on the ground had seen fire spreading on the plane as it flew and that it had exploded after hitting the ground.

The U.S. government has nor commented on the possible cause of the crash. But Reuters on Wednesday cited five anonymous security sources -- three American, one European and one Canadian -- that the initial assessment of western intelligence was the plane had suffered a technical malfunction and had not been brought down by a missile strike. The Canadian source said there was evidence one of the jet's engines had overheated, according to Reuters.

Canadian Prime Minister Justin Trudeau and Transport Minister Marc Garneau held a press conference Wednesday afternoon where they said they could not speculate on the cause of the crash, but said "something very unsual happened."

"We lost contact with it, suggesting something very unusual happened, but we cannot speculate at this point," Garneau said. "There are a number of possibilities and we will have to wait to obtain more information perhaps from the black boxes or from other intelligence but at this point it's too early to speculate."

At a press conference in Kyiv, Ukraine International Airlines executives said the plane was built in 2016 and had been one of the best in their fleet. Its most recent scheduled service was two days ago, they said.

The crew was also highly experienced, according to the airline; the captain, Volodymyr Gaponenko, had 11,600 flying hours, mostly spent on 737 aircraft, and his co-pilots also had several thousand hours on the planes, Ihor Sosnovsky, the airline's vice president of operations, told reporters.

"Given the crew's experience, error probability is minimal. We do not even consider such a chance," Sosnovsky said. According to the airlines, this is the first fatal crash since its founding in 1992.

Boeing has been under increased scrutiny since two Boeing 737 Max planes were involved in fatal crashes that killed a total of 346 people.

The aircraft that crashed Wednesday, however, is not a Max, but a 737 Next Gen -- an earlier model that has a generally strong safety record. The 737 Next Gen does not have the software investigators linked to the fatal 737 Max crashes.

"We are aware of the media reports out of Iran and we are gathering more information," Boeing said in a statement Wednesday to ABC News.

Following the crash, several major airlines announced they would avoid Iranian airspace in light of the tensions there. Air France, Lufthansa, KLM, Malaysian Airlines and Taiwan's largest carrier, China Airways, said they ordered their flights to take alternate routes to avoid flying over Iran and Iraq. Air Canada and Singapore airways said they had also altered their flight plans.

The Federal Aviation Authority on Tuesday prohibited U.S. carriers from flying over Iran, Iraq, the Persian Gulf and the Gulf of Oman, and the Russian national aviation authority on Wednesday recommended the same.

Officials with the International Air Transport Association said they were "deeply saddened" by the news of the crash.

"Our thoughts and condolences go out to the families & friends of those 180 souls who have lost their lives," officials with the global airline organization posted on Twitter.