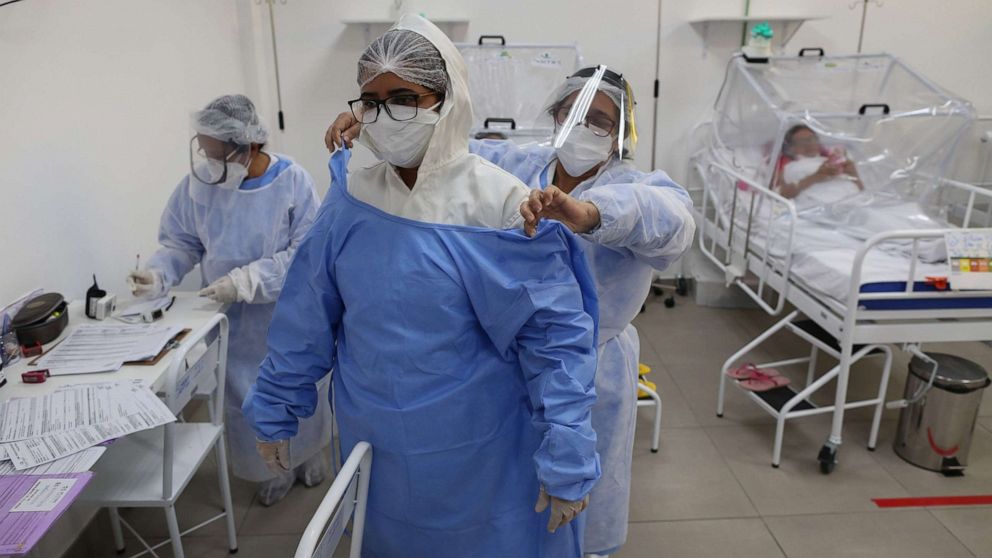 Since 2019, President Donald Trump has found a fellow nationalist warrior in Brazil's Jair Bolsonaro, the controversial right-wing populist president of Latin America's largest country, and for the last few weeks, they've found common cause in downplaying the threat of the coronavirus and urging their countries to "reopen," even as local governors implement restrictions to stem the virus' spread.

That's part of what made a late Sunday night announcement from the White House so notable: Recognizing the threat of the coronavirus spreading from Brazil to the U.S., Trump signed a proclamation banning travel from Brazil.

Two days later, Brazil has now overtaken the U.S. for the highest daily death toll, and the White House's ban will take effect two days earlier than originally planned -- Tuesday night at 11:59 p.m. Some of Trump's critics have asked why it didn't happen even sooner.

The ban, which applies to all foreign nationals who have been to Brazil in the last 14 days, is a blow to Bolsonaro, who continues to defend his approach of keeping businesses open, even as Brazil's hospitals and graveyards are overwhelmed.

"The potential for undetected transmission of the virus by infected individuals seeking to enter the United States from the Federative Republic of Brazil threatens the security of our transportation system and infrastructure and the national security," Trump said in his proclamation Sunday night. Late Monday, the White House amended the order to take effect Tuesday night instead of Thursday, but did not provide a reason why.

Over the weekend, Brazil overtook Russia for the second-highest number of COVID-19 cases, according to Johns Hopkins University's tally, behind only the U.S. On Monday, the country reported 807 deaths -- the highest of any country -- marking the first time any country has reported more deaths in a single day than the U.S. since the end of March.

Given the lack of widespread testing or the incentive for governments to obscure their numbers, some analysts believe those numbers may be under-reported, in Brazil and elsewhere.

As the case load climbs higher, Brazil's underfunded hospitals have been pushed to the brink of collapse in several states, exacerbating the crisis. Manaus, the capital and largest city in Amazonas state, alone has seen over 23,000 people killed by the coronavirus, and that number is reportedly a vast undercount. The Amazon region's deficient health infrastructure and poorer indigenous communities have been hit hardest, along with sprawling So Paulo and its massive favelas.

The country is projected to have 125,833 deaths by Aug. 4, according to the University of Washington's Institute for Health Metrics and Evaluation.

Two of Bolsonaro's ministers of health have been ousted during the pandemic. One fired for supporting governors' restrictions as Bolsonaro publicly undermined them and rallied his supporters to disobey them. The second quit after openly disagreeing with Bolsonaro over chloroquine, an anti-malarial drug related to hydroxychloroquine that Trump has touted as a treatment for COVID-19. Neither drug has been shown to be effective, with the latest evidence suggesting hydroxychloroquine does more harm than good.

If Bolsonaro has been injured by Trump's travel ban, he hasn't shown it. He declined to answer reporters' questions when leaving the presidential residence in Brasilia on Monday -- except to adopt a favorite Trump tactic and attack the press, telling a crowd of supporters, "The global press is leftist," according to the Associated Press.

"There isn't anything specifically against Brazil. Ignore the hysteria from the press," tweeted Filipe Martins, Bolsonaro's special adviser on international affairs, adding it's the same as Trump's restrictions on travel from China, Iran and much of Europe.

But Trump hasn't restricted travel from any other South American countries or other major new hot spots like Russia and India. His proclamation singled out Brazil for having "widespread, ongoing person-to-person transmission," even as his National Security Council praised Brazil as "one of our strongest partners in the world" and announced the U.S. would donate 1,000 ventilators to the country.

Trump and his senior advisers have not criticized Bolsonaro's approach, with Trump seeming to downplay its role in Brazil's skyrocketing case load last month: "Brazil went a different way than other countries in South America. If you look at the chart, you'll see what happened, unfortunately, to Brazil."

Some critics have questioned whether those close ties meant the Trump administration was slower to act. China, for example, had far fewer confirmed cases when Trump issued a similar ban at the end of January than Brazil does now.

"What took us so long? Who were we flying in first?" said Andy Slavitt, acting administrator of the Centers for Medicare and Medicaid Services under President Barack Obama.

Daily nonstop flights between the two countries, from So Paulo to Houston for example, continued Monday. A handful of passengers scrambled last-minute to bump up their tickets scheduled for June in order to make it before the ban went into effect, according to Reuters, with one exchange student telling the news agency, "With the news about the decree, I wanted to get a head start. It was a bit difficult to buy a ticket, but I got one for today."

Trump himself faced exposure to COVID-19 from Brazil. During a visit on March 7, Trump hosted Bolsonaro and a visiting Brazilian delegation for dinner, and days later, one of Bolsonaro's top aides who was photographed next to Trump wearing a "Make Brazil Great Again" hat tested positive for the virus. Both Bolsonaro and Trump later tested negative.