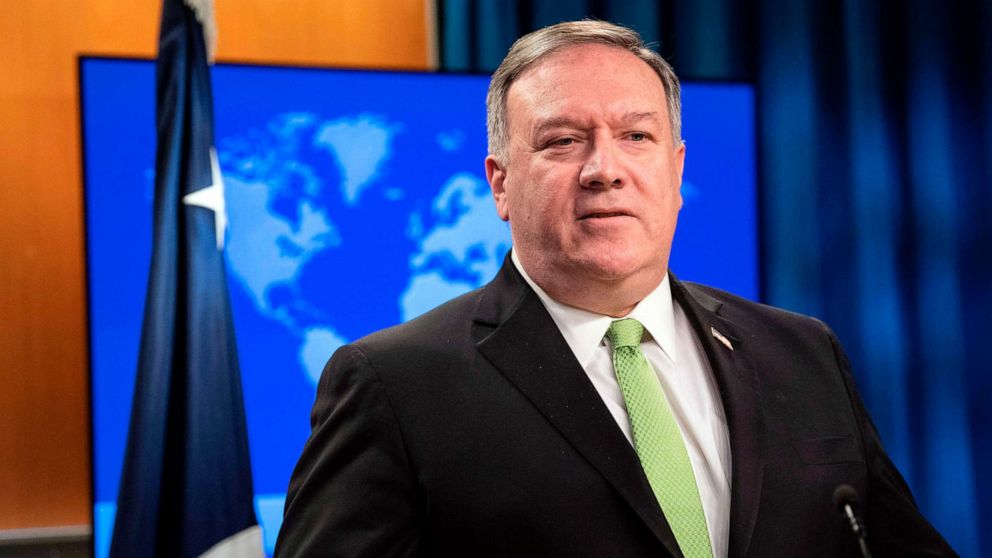 Secretary of State Mike Pompeo did not violate a law governing federal employees' behavior with his trips to Kansas in 2019, according to a letter from an independent federal investigative agency released by Pompeo late Thursday.

Pompeo has come under increased scrutiny after recommending the firing of the State Department's inspector general. Democratic lawmakers announced they were expanding their investigation Friday, requesting interviews with several senior State Department officials.

The probe into Pompeo's travel began last year after he made a series of trips to his adopted home state, with questions about whether he was using his office as secretary to pursue a run for Kansas's open Senate seat. The federal agency, known as the Office of Special Counsel, cleared him of wrongdoing in January because he said he is not running for office.

From the inspector general's firing to the travel probe, the top U.S. diplomat has pushed back on the renewed scrutiny by striking out at New Jersey Sen. Bob Menendez, the top Democrat on the Senate Foreign Relations Committee, which oversees the State Department. Pompeo accused him of "hackery" and "character assassination attempts" in a fiery letter released to ABC News.

Last fall, Menendez called for an investigation by the Office of Special Counsel, or OSC, a special government agency tasked with investigating and prosecuting federal employee laws. That includes the Hatch Act, which prohibits federal employees from using their position or government resources to pursue political office.

According to the agency's letter, dated Jan. 21 and released by Pompeo's office, the office's Hatch Act unit chief said there was "no evidence" Pompeo violated the law when he made four trips to Kansas in 2019, three of which were for official purposes. Those trips helped fuel speculation that Pompeo may run for the open Senate seat in his adopted home state, where he served three terms as a congressman -- especially after he met with conservative billionaire Charles Koch during one visit in October.

Pompeo has said repeatedly he will not run for the seat, despite efforts by senior Republicans, including Senate Majority Leader Mitch McConnell, to recruit him to run. The OSC said it relied on Pompeo's public and reported denials to reach its conclusion, including reports in early January that Pompeo told McConnell he was a firm no.

"Based on our review of the evidence to date, OSC cannot conclude that you are currently a candidate in the 2020 Senate election in Kansas," wrote Ana Galindo-Marrone of the OSC, "Accordingly, OSC is closing this matter but reserves the right to reopen its investigation pending any new developments."

The filing deadline to enter the Kansas race is this Monday at noon. The race is shaping up to be a competitive one for Kansas, usually a Republican stronghold, particularly if one of the leading GOP candidates wins the party's nomination -- controversial former Kansas Secretary of State Kris Kobach, known for his hard-line immigration views.

In a letter to Menendez accompanying his release of the OSC letter, Pompeo accused the senator of "hackery" and "character assassination attempts" against him. He pointed to Menendez's comments to the Wall Street Journal last week that he never received a response from the OSC.

"The scurrilous allegations you put forward had the additional effect -- one which you clearly intended when you publicized your letter to the OSC -- of generating a series of media articles and reports with rumors, innuendo, and flat untruths about me and the U.S. Department of State," Pompeo wrote.

He copied several news outlets and said they "joined in your slander on this" -- a list that included ABC News, which reported on Menendez's original call for an investigation.

A Pompeo aide specifically pointed to a November 2019 story that noted that Pompeo's travel has "drawn scrutiny from Congress" and that Menendez had "sent a letter to the Office of Special Counsel, asking for an investigation into whether Pompeo's travel has violated the Hatch Act."

Pompeo and the top Democrat on the Senate Foreign Relations Committee have battled for as long as Pompeo's been the secretary and subject to the committee's oversight. They traded sharp words at a hearing after President Donald Trump's Stockholm summit with Russian President Vladimir Putin in 2018.

"Clearly the Secretary of State feels deeply disturbed by the ongoing oversight work of the Senate Foreign Relations Committee," Menendez said in a statement to ABC News Friday. "High-level temper tantrums will not stop the Committee from conducting our oversight responsibilities."

Menendez and several top Democrats in the House opened an investigation into Linick's removal, which Pompeo said he recommended. His office was probing Pompeo's use of an emergency declaration to bypass congressional opposition and transfer $8 billion of arms to Saudi Arabia and the United Arab Emirates, as well as whether Pompeo used a political appointee to run personal errands for him and his wife.