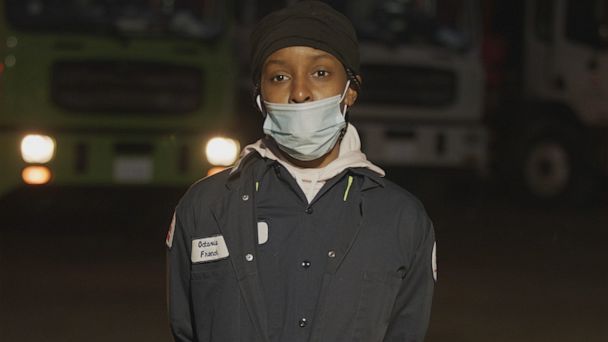 Every day, Latisha Knight suits up at the suburban New York hospital where she works to fight the novel coronavirus. But she is not there to provide medication to patients or perform surgeries.

Knight is an environmental services employee who cleans and sanitizes patient rooms at Northwell Health in Plainview, New York. Every day she has to don protective gear to do her job.

"We usually just go in and get it done and we're out," Knight told "Nightline."

She continued, "It's very hard. I've seen patients where one day they're talking on FaceTime with their families and the next day I come into work and they're being rushing into the ICU."

The single mother of three said her unit is made up almost entirely of COVID-19 patients, and that her family would rather she stay safe at home and far away from the virus.

"When my father was diagnosed and I was telling my children, I was like, 'This is why mommy has to go to work, so that grandpa could be in a room where it's clean and he can get better,'" Knight said.

Knight is among the essential workers across the United States who continue to show up for work every day, manning the "other" front lines. They're the ones keeping everything in a community running, from utility and sanitation workers to funeral home staff. They keep the power on, the garbage collected, the hospitals clean and operational, and help us bury the dead.

Melody Aravena's husband, Rolando Aravena, was an essential worker who died from COVID-19. She said her husband, a 44-year-old telecom field technician for Verizon, had been sent to complete a job at a New York City hospital on March 11 to help it prepare for a surge in communications.

"During this time when he was working, he was very concerned with his job because there was no proper training and no proper protocol," she said.

There's no way to know exactly how he contracted the virus, but a little more than a week later, he began feeling sick, Aravena said.

When she took him to the hospital, she said one of the last things he said to her was, "Mel, I never knew a love like this before and I love you so much." While he was undergoing treatment, Aravena said she FaceTimed with him and tried to keep his spirits up.

The father of five, who was a volunteer basketball coach and avid Spartan racer, died on March 29 -- his twin daughters' 10th birthday.

"He was a real girl dad," Aravena said. "He was a very good salsa dancer ... he loved dancing mambo."

"If he had to die to save other people's lives, I'm going to try to make amends with that," she added.

In a statement, Verizon said of Rolando Aravena: "Our deepest sympathies are with Rolando 'Sonny' Aravena's family and friends. Our team is grieving alongside them. ... Knowing that our team members are still in the field, we have taken every measure and dedicated every resource available to keeping our frontline workers safe and secure as we keep our nation connected."

"Just the fact that he was an essential worker, when it came down to the health system he was just a statistic point somewhere," Aravena said. "It really, really hurts because these people are out there risking their lives every day."

Many essential workers have to weigh trading time at home with their families for an around-the-clock work life. Multiple utility workers, from Tallahassee, Florida, to Syracuse, New York, told "Nightline" that they'd turned their office space into bedrooms. Some electric grid workers said they had spent as many as 30 days away from their families.

"It's a surreal feeling when you get up in the morning and you go right to your desk," said John Spink, who works for National Grid in Syracuse.

Spink said the experience has brought his coworkers closer together, saying it's "the camaraderie that helps."

In Washington, D.C., Octavia French is one of the city's 235 sanitation workers who wakes up every morning to collect trash and recycling throughout the city.

"What makes me come to work is I know what it feels like to not have a job," French said. "I have a 7-year-old son. He motivates me to keep going and I pray every day before coming onto the route that God will protect me while I'm out there."

In the time of COVID-19, French said she feels appreciated for the job she's doing, and that people on her route have left her snack bags, homemade thank you signs or chalk drawings on the sidewalk to show it.

"It made me feel like I'm a first responder. Like my job is really important," she said, noting that since she can't work from home, she'll be out there "doing the footwork."

French said she and her fellow workers have been taking extra precautions on their route, wearing masks and double gloves, but social distancing is tough in the cab of a garbage truck.

Chris Geldart, who oversees D.C.'s public works department, says it's his job to keep French and his fellow employees safe.

"It's a pretty heavy weight," Geldart said. "Picking up the trash is what we've got to do. It's what we do on behalf of our city. It's what we do so the residents can see the government still working ... and that we're gonna continue to do our job and our part to make sure that we get through this."

In quiet moments, French said what worries her is people possible losing their lives to the virus.

"Just a [sneeze], a cough, can cause so much damage," she said. "I watch the news, read the paper, and sometimes I have to turn the news off ... the less I see, the less I worry. I know I still have to go to work. There's no way out of that."

"We're part of a community of first responders," said Philip Caraciolo, director of operations at Servpro of Midtown Manhattan in New York City. "We head right toward the storm and this is not something that we shy away from."

Caraciolo and his environmental services crew have been traveling all around New York City responding to calls to sanitize spaces that may have been contaminated by COVID-19.

Caraciolo, who has been with Servpro for more than 10 years, recently suited up to clean the apartment of someone who had tested positive for the virus. In addition to wiping down and disinfecting surfaces, Caraciolo showed how they use a special fog machine that disperses chemicals believed to kill the virus onto the walls, ceiling and floor.

While he works, Caraciolo said "there's absolutely something in the back of your head where you're nervous, you're scared." But he said his team has also prepared for moments like this. They've traveled for hurricanes and storms but he admitted that it's "different when you're dealing with an enemy you can't even see."

As he faces the risk of contracting COVID-19, he said he's taken precautions to avoid transmitting the virus to his family.

"I haven't seen my parents, my nephews, my brother and sister and my girlfriend in quite some time, and it's been tough," Caraciolo said. "But you want to make sure you keep a safe distance. God forbid I'm carrying it. I don't want to transfer it to anybody."

Many of the essential workers in the U.S. also have to take taxis, rideshares and mass transit to get to work. Those who operate these transportation services are also vulnerable to exposure to COVID-19.

Last month, Detroit bus driver Jason Hargrove became ill with the virus a few days after posting a video on Facebook in which he fumed about a woman who he said stood on his bus and coughed without covering her mouth.

"We out here as public workers doing our jobs, trying to make an honest living to take care of our families. But for you to get on the bus and stand on the bus and cough several times without covering your mouth ... that lets me know that some folks don't care," Hargrove said in the eight-minute video.

Hargrove, a father of six, died a week later. It's unclear how he contracted the virus.

His wife, Desha Johnson-Hargrove, said that he feared going in to work every day.

"When he came home, he was so distressed. He got out of his clothes. You know, it just bothered him so bad," Johnson-Hargrove said. "He just kept saying, 'Baby, I'm so mad.' And I just kept trying to calm him down and I'm just like, 'It's going to be OK.'"

One funeral home in Brooklyn, New York, has been inundated by families seeking their services. The staff at the Scarpaci Funeral Home said they are tending to 17 bodies, according to the funeral home's manager, Anthony Pennachio.

The funeral home has had to change a lot of its policies due to the virus, including limiting the number of people who can come to viewings and reducing the amount of time for viewing. If the person died from COVID-19, their family can only get a closed-casket viewing.

"We're not making any in-person arrangements anymore, so my cousins will meet them on a FaceTime phone call or a Zoom [meeting]," Pennachio said. "We have to send them pictures -- things we never did before. Physical photographs of the casket was sent to people's smartphones in order to make the casket selection."

The staff says they are running out of gloves, gowns and masks. Pennachio said they're also running out of space, and they've resorted to turning one of their viewing chapels into a storage facility for pending cremations and burials.

"I feel bad for our families that they can't mourn their loved ones like they should," said Celeste Hurta, Pennachio's cousin and a cosmetologist at the funeral home. "It breaks my heart."

Hurta, who was diagnosed with breast cancer a month ago and had to postpone her surgery due to the pandemic, said as many as 70% of the bodies coming into the funeral home are COVID-19 patients.

"We are all family, we are all a team. We're all working together to benefit everyone," Knight said. "We need to thank each other more. We need to make sure that we continue to show gratitude and appreciation towards one another, not just during this time but afterwards."
Report a correction or typo
Related topics:
abc newsnational
Copyright © 2020 ABC News Internet Ventures.
More Videos
From CNN Newsource affiliates
TOP STORIES