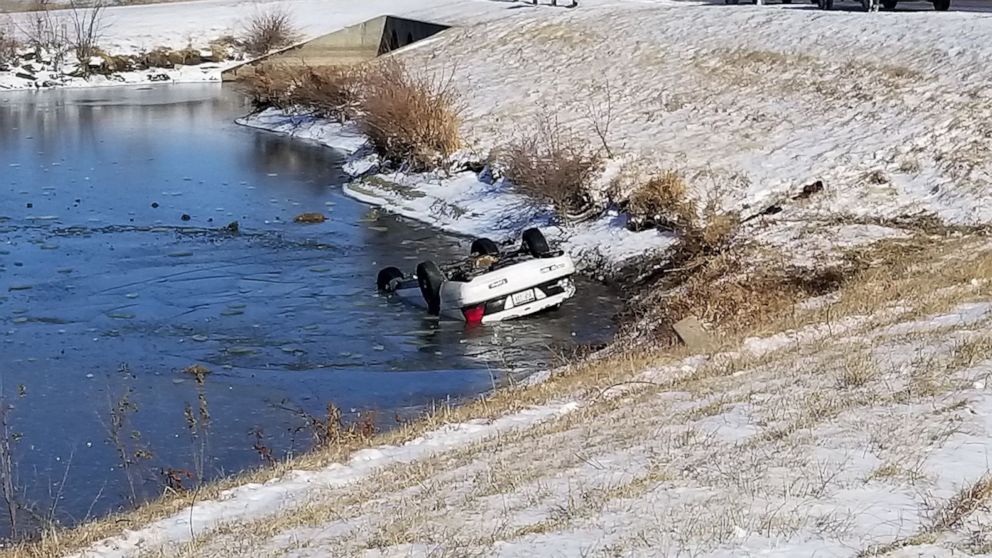 ABCNews
By JON HAWORTH
A Nebraska man is being hailed as a hero after jumping into action to save the lives of three men whose car landed upside down in an icy pond and they couldn't get out.

Terry Ingram was out taking pictures of eagles in Bellevue, Nebraska, on Saturday afternoon when he witnessed a white sedan lose control while crossing railroad tracks, strike a fire hydrant and then land upside down in the ice-cold pond, according to ABC News' Omaha affiliate station KETV.

"The car just came right in front of me," said Ingram. "They hit the fire hydrant and I don't think they even touched the ground ... they were already airborne."

Ingram then heard the men screaming for help and he immediately jumped into action.

"I panicked when I heard the guy's voice. 'Get me out, it's filling full of water,'" Ingram told KETV. "Once I pulled the door open, the water started going in, and he was coming out. Just seeing those bodies there, I thought they were gone."

Ingram dove into the freezing water and managed to pull one of the car doors open.

"Once I pulled the door open, the water started going in and he was coming out," said Ingram according to ABC News' Fresno station KFSN.

Ingram was able to pull the three men out of the overturned and submerged vehicle and helped to drag them to shore.

Two of the men were taken to Nebraska Medicine with non-life-threatening injuries but Ingram said he was lucky to be in the right place at the right time.

Ingram told KETV that he will always look back at the pictures he took that day and be thankful that his timing was right and that he was there to save the lives of the three men. He also hopes to meet up with the men he saved to see how they're doing after their traumatic experience.