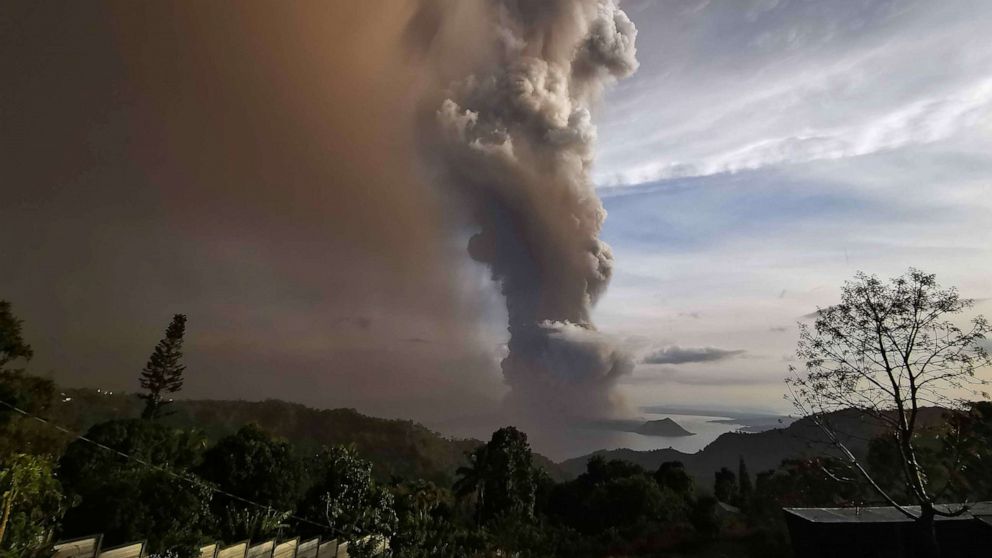 ABCNews
By JULIA JACOBO
Officials in the Philippines have warned residents of a possible "volcanic tsunami" following the eruption of a small volcano near the capital of Manila.

The main crater for the Taal Volcano in the Batangas province, about 55 miles south of Manila, was continuously erupting a stream of ash and pebbles up to 9 miles in the sky on Sunday afternoon, according to a bulletin by the Philippine Institute of Volcanology and Seismology.

Volcanic tremors began around 11 a.m. local time, followed by two volcanic earthquakes with magnitudes of 2.5 and 3.9, which were felt in the cities of Tagaytay City and Alitagtag, according to the institute.

By Sunday evening, officials raised the alert level from 3 to 4, indicating that a "hazardous explosive eruption is possible within hours to days." A Level 5 is the highest, meaning a hazardous eruption is underway and could affect a larger area, The Associated Press reported.

The institute recommended a "total evacuation" of the Taal Volcano Island as well as additional evacuations in areas within an 8-mile radius of the volcano's main crater.

Areas north of the volcano were also warned to expect heavy and prolonged ashfall and civil aviation authorities were instructed to avoid the airspace around the volcano.

The eruption shut down Manila's Ninoy Aquino International Airport and forced thousands of people to flee the area. The U.S. Department of State warned Americans in the Philippines to "exercise caution" if traveling to the area.

"Those planning travel to the Taal volcano region are encouraged to monitor current conditions, maintain active awareness of local conditions, and especially refrain from entering the Permanent Danger Zone and high-risk barangays," the State Department said.

No injuries or damage have yet been reported.

The Philippines is one of the most disaster-prone countries, with about 20 typhoons and other major storms hitting the islands each year, according to AP.