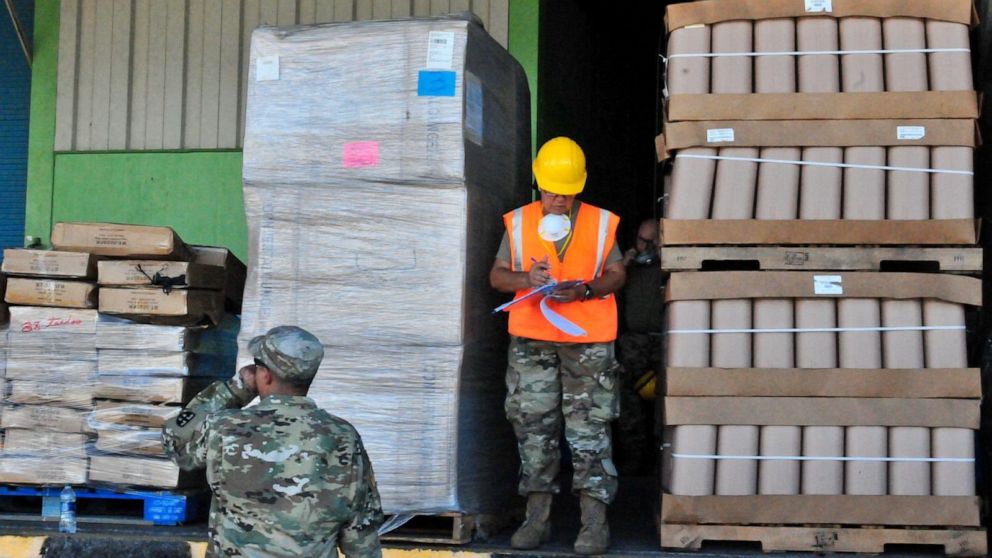 ABCNews
By KARMA ALLEN
Government officials in Puerto Rico have referred an investigation into why the much-needed disaster aid went unused for years to the Department of Justice.

The office of Gov. Wanda Vazquez announced Monday night that the Bureau of Special Investigations -- which had 48 hours to conduct a preliminary investigation -- recommended referring its preliminary conclusions to the DOJ "so that a thorough investigation continues with priority and the corresponding actions are taken by law," according to a statement.

The aid, believed to have been delivered during Hurricane Maria in 2017, was discovered in an abandoned government-operated warehouse in the southwestern city of Ponce over the weekend, sparking a wave of angry protests.

Authorities began distributing the aid to residents on Monday in the wake of a deadly hurricane and more recently a batch of crippling earthquakes.

The once-abandoned supplies -- which included thousands of sealed cases of water bottles, pallets of food, diapers, baby formula and cots -- were distributed to shelters in communities where powerful earthquakes leveled homes in recent weeks and caused an estimated $110 million in damages, according to government officials.

Some residents gathered outside of the Governor's Mansion in San Juan to call for the governor's resignation amid questions over why the aid didn't make it to those in need earlier.

Puerto Rico Gov. Wanda Vazquez fired the island's chief of emergency management, Carlos Acevedo, and temporarily called for the National Guard to oversee the agency amid an ongoing investigation into why the aid was left to sit while residents were in need.

"In the last days there have been actions by members of the government that are not acceptable," Vazquez told reporters Sunday. "I will not permit this type of conduct in my government."

She also called for the resignation of Family Affairs Secretary Glorimar Andujar and Housing Secretary Fernando Gil after they were unable to provide the information she requested on their agencies' distribution centers.

They tendered their resignations after the press conference concluded.

"I feel the indignation that the people of the island feel," Vazquez said.

When asked how it was possible she did not know about the existence of the 43,000-square-foot warehouse, Vazquez replied: "That's what the head of agencies are for ... to inform the governor."

Vazquez has vowed that all the Ponce warehouse supplies that are not expired would be distributed to the towns that were the hardest hit by the quakes.

Acevedo defended the emergency management agency before his firing in a statement released on Saturday. He said the warehouse had been inspected after a recent earthquake by a structural engineer who recommended emptying it due to damage suffered.

"It is important to emphasize that no citizen has been denied any of the items found at this place," the statement said. "At the moment, there is no shortage of any of these articles and they are being distributed to the people who need it; data that can be verified in the shelters and base camps."

Acevedo said at one point there had been 600 pallets of water, which were distributed to the public when Hurricane Dorian and Hurricane Karen threatened Puerto Rico, but there were about 80 left.
Report a correction or typo
Related topics:
abc newsnational
Copyright © 2020 ABC News Internet Ventures.
More Videos
From CNN Newsource affiliates
TOP STORIES