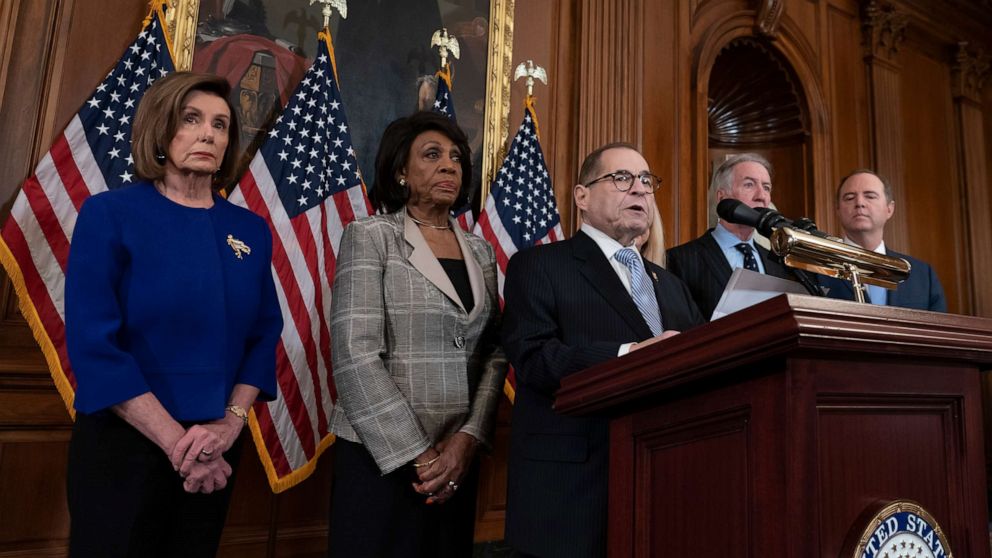 Democrats have unveiled two articles of impeachment against President Donald Trump on charges of abuse of power and obstruction of Congress.

House Speaker Nancy Pelosi, joined by chairs of the impeachment inquiry committees, began the announcement by calling it a "solemn" occasion as Democrats said the president left them "no choice" but to impeach.

"She is setting the tone, she's setting the pace, and she's setting the boundaries of impeachment," ABC News Senior National Correspondent Terry Moran tells "Start Here" today. "Nancy Pelosi has a very tight rein on this, and you could see it and feel it in that room."

The president reiterated on Tuesday that he did nothing wrong and accused Democrats of announcing a deal on the USMCA trade deal on the same day because they were "embarrassed" of their impeachment decision.

Two gunmen exchanged fire with police officers in Jersey City, New Jersey on Tuesday, trapping customers in a supermarket and putting schools in the area on lockdown.

The two suspects and three civilians who were inside the store were found dead, according to police. One officer was killed and another shot in the shoulder.

There are growing questions about how tourists were allowed to visit New Zealand's most active volcano as the death toll rises from an eruption earlier this week.

ABC News' Marcus Moore joins "Start Here" from New Zealand, "You have to conisder that this area thrives on tourism... this has really come as a huge blow to them both on an emotional level and potentially on an economic level because there are businesses that rely on the tourists that are drawn to this volcano."

'Elusive as a pigeon can be': Pigeons wearing cowboy hats have been spotted roaming Las Vegas and the viral videos of the well-dressed birds have the internet talking -- and at least one local charity trying to save them.

'I'll just resign': A Georgia city councilman resigned on Tuesday amid accusations of racism due to his strong opposition to interracial marriage.

'Absolutely heroic': When the car they were riding in careened off a dark road in Washington and plummeted down a steep embankment killing their father, 4-year-old twins Rosaline and Aurora Simmons realized they had to escape the wreckage fast and "go home to get mommy," police and relatives said.

'Stand for conservatism': Pierce Bush, the grandson of the late President George H.W. Bush, launched a congressional bid Monday, hoping to extend the Bush political dynasty within the bounds of Texas.

'Where Americans stand on the Democrats' impeachment charges': After months of investigation and public testimony, the impeachment train has officially left the station. On Tuesday, Democrats introduced two articles of impeachment against President Trump: abuse of power and obstruction of Congress. And the House Judiciary Committee is now expected to vote on the charges against Trump later this week.

Employees at a Baltimore-based commercial real estate firm had the holiday office party that dreams are made of.

Their boss, Edward St. John, founder of St. John Properties, surprised the company's 198 employees with a $10 million bonus during their Dec. 7 holiday party.

The employees each opened an envelope at the same time that contained the amount of their individual bonus, some of which were upward of $270,000.

"I remember opening the envelope, seeing the number, blinking my eyes a couple of times because I thought my vision was off and then hugging my coworkers," said Melissa Alleman, the company's payroll and benefits administrator. "I think I said a few times, 'I can't breathe,' I felt a little nauseous and then just celebrated."
Report a correction or typo
Related topics:
abc newsnational
Copyright © 2020 ABC News Internet Ventures.
More Videos
From CNN Newsource affiliates
TOP STORIES