The Note: Uncertainties loom over 2020 campaign 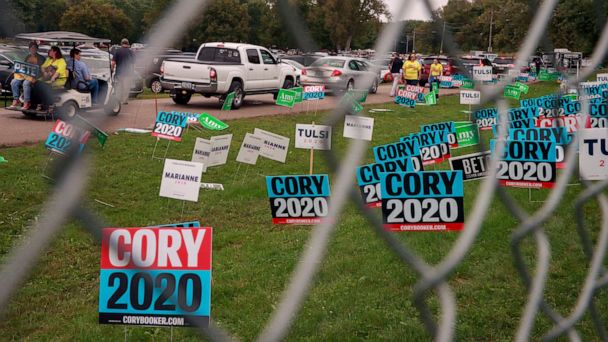 ABCNews
By RICK KLEIN
The TAKE with Rick Klein

The first votes of 2020 are barely a month away. But there's a whole lot of big questions that need answering before we get there.

There's an impeachment trial to squeeze in--unless there isn't. There's political warfare in Washington--and now the possibility of real-life fighting with Iran or North Korea, if not both.

There arefundraising numbersto announce and spin.And there's another debate to qualify for--unless a Senate trial means it doesn't happen as scheduled.

Uncertainties are threatening to subsume campaigns. That goes for the five senators who are running for president, the front-running candidate who might be on some proposed lists of impeachment witnesses and,really,any candidate who wants to control a news cycle or two.

In some ways, 2019 saw both everything and nothing happen in the campaign. A year that revealed the endurance of Joe Biden and Bernie Sanders also featured the emergence of Pete Buttigieg and Andrew Yang -- not to mention surprise drop-outs and conspicuous failures to launch.

Now comes the time for some answers. The forces controlling the race appear to be bigger than any candidate can hope to handle.

The RUNDOWN with MaryAlice Parks

At the end of the Rose Parade in Pasadena, California, on New Year's Day, dozens of Bernie Sanders' supporters flooded the street, carrying signs and chanting to show-off their support for the Vermont senator in front of the captive crowd.

Anecdotally, the moment was indicative of the sort of grassroots enthusiasm -- often unrivaled -- which Sanders enjoys and fosters.

Last month at the Democratic debate in Los Angeles, his team made clear that they like their chances of winning the largest state in the union, which starts early voting the same day as the Iowa caucus.

Wednesday, his campaign claimed they reached an impressive fundraising high-water mark too: 5 million unique contributions so far this race. According to the campaign, Sanders raised $34.5 million in the fourth quarter of 2019. By comparison, Pete Buttigieg's team says he raised more than $24.7 million in the same time.

Of course, many of those individual donations for Sanders come from dedicated, repeat donors. Still, it's quantitative evidence of his staying power.

The TIP with Justin Gomez

After announcing another giant fundraising quarter to wrap up 2019, Buttigieg starts 2020 with deeper pockets and free of his day job as he's now the former mayor of South Bend, Indiana.

Buttigieg starts a four-day trip to New Hampshire on Thursday after his campaign revealed that they raised $24.7 million in the fourth quarter, and over $76 million since the beginning of 2019. For all the criticism and attacks against Buttigieg in recent weeks about his high-dollar fundraising, the campaign also noted that 98% of contributions last year were less than $200, and the average contribution was $38.

With some of his competitors possibly being forced off the trail for a Senate impeachment trial later this month, Buttigieg is clear of his mayoral duties and focused on the presidential race. But he won't say if that creates an advantage for him.

"I'll let others figure out the kind of political consequences. This is one of those moments that's just got to be beyond politics because it's so grave and so important," Buttigieg said after a town hall in Marshalltown, Iowa, on Saturday.

Presidential contenders ended 2019 with the close of books on the fourth fundraising quarter, marking another significant turning point that could possibly reorder the trajectory of the primary contest. The fourth quarter covers the months of October, November and December and as more candidates release the details on their recent fundraising numbers, ABC News willcontinue to update this story.

WHAT YOU NEED TO KNOW TODAY

Download the ABC News app and select "The Note" as an item of interest to receive the day's sharpest political analysis.