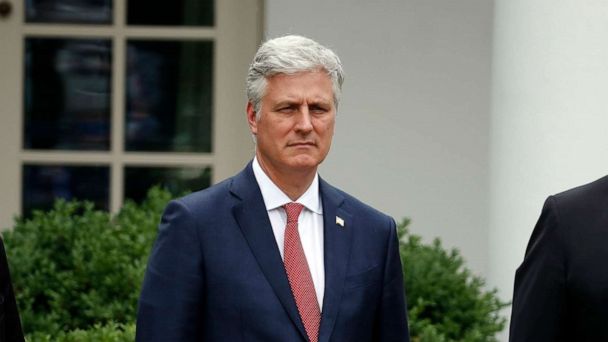 As nationwide protests over the weekend turned violent in response to the death of George Floyd in Minneapolis, President Donald Trump's national security adviser continued to place blame solely on the far left, despite a report from the Department of Homeland Security that finds extremist groups across the ideological spectrum are attempting to exploit the demonstrations.

In an appearance on ABC's "This Week" Sunday, Robert O'Brien echoed statements from Trump and Attorney General William Barr pointing to a militant left-wing group, claiming, "it's the violent antifa radical militants that are coming out under cover of night, traveling across state lines, using military style tactics to burn down our cities."


But the administration's own intelligence shows that far-right groups and even white supremacists are also attempting to take advantage of the unrest.

"The Department of Homeland Security, which reports to you, has put out intelligence notes over the weekend warning that domestic terrorists from the far-right and the far-left -- both -- are looking to exploit this," ABC News Chief Anchor George Stephanopoulos said to O'Brien. "It's not just antifa and the left, they're saying they're worried about the far right as well."

"Everything I've seen ... and the reports we're receiving is that this is antifa, they're crossing state lines, and we've seen this happen before," O'Brien responded. "We'll keep our eyes open for anyone else that wants to take advantage of the situation, whether it's domestic or foreign. But right now, I think the president and Attorney General Barr want to know what the FBI has been doing to surveil, to disrupt, to take down antifa to prosecute them."

Stephanopoulos pointed to a warning to law enforcement this week in which federal authorities flagged incendiary messages sent Wednesday by a racially motivated group that "incited followers to engage in violence ... by shooting in a crowd."

"You said you haven't heard about any other incitement from the right, but the DHS warning that went out this week noted specifically that the white supremacist extremist telegram channel was inciting the violence as well," Stephanopoulos said. "They're saying it is both sides that are inciting violence from the outside."

Still, O'Brien insisted the images of destruction, violence and vandalism that played out live on television over the weekend were the fault of left-wing extremists.


"I think the actual perpetrators of the violence, the ones that are on the street that are burning down minority-owned businesses and restaurants who have already suffered through this terrible COVID situation and are at risk of losing their business and now they're seeing them burn to the ground, those are antifa radical militants," O'Brien responded.

"Look, I condemn all extremists on the right or on the left, but the ones who are out on the streets throwing the Molotov cocktails and attacking our police -- who are acting, you know, for the most part with restraint and heroically -- you know, that has to stop," he continued.

Stephanopoulos also asked O'Brien about the role the president's rhetoric is playing in stoking unrest across the country, including an inflammatory tweet Friday morning stating, "when the looting starts, the shooting starts. Twitter flagged the message with an unprecedented advisory stating that it "violated the Twitter Rules about glorifying violence."

"Does the president -- should he be taking responsibility for those tweets, as well?" asked Stephanopoulos.

"The reason he uses Twitter is to get directly to the American people -- I think what he said about those tweets is that he wants to deescalate violence and doesn't want people looting," O'Brien said, after earlier noting that he was with Trump when the president first viewed the video of Floyd's death and that Trump immediately tweeted a demand for an investigation.


"Sen. Rubio is spot on. And I've seen a number of tweets from the Chinese today that are taking some sort of pleasure and solace in what they're seeing here," O'Brien said.

He also delivered a message about the difference between the U.S. and its adversaries.

"I want to tell our foreign adversaries, whether it's a Zimbabwe or a China, that the difference between us and you is that that officer who killed George Floyd, he'll be investigated, he'll be prosecuted and he'll receive a fair trial," O'Brien said.

"There's a difference between us and you, and when this happens, we'll get to the bottom of it. We'll clean it up. It's not going to be covered up."

When asked whether the officers who witnessed Floyd's arrest and failed to act should also be prosecuted, O'Brien called it "an absolute outrage."

"I can't imagine that they won't be charged. I don't want to pre-judge anything, but what we saw was horrific, and to have stood by and allowed that to happen is, you know, shows a lack of humanity."
Report a correction or typo
Related topics:
abc newsnational
Copyright © 2020 ABC News Internet Ventures.
More Videos
From CNN Newsource affiliates
TOP STORIES