Tulsi Gabbard surfs and pitches sports in an appeal to voters 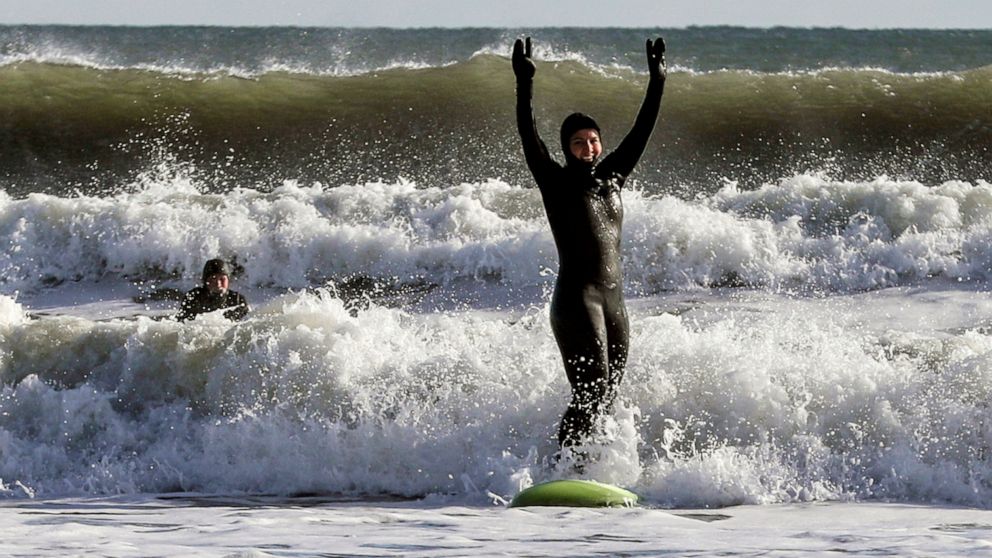 ABCNews
By BEATRICE PETERSON
Manchester, N.H. -- Light snow covered the ground in Seabrook, N.H. on New Year's Eve as Rep. Tulsi Gabbard took off her shoes and plunged into the frigid Atlantic Ocean.

As the Hawaii congresswoman emerged from the icy water moments later, her long-sleeved blue shirt was soaked and she was handed a red and white striped towel which she draped over her shoulders.

The plunge into the waves on the shoreline of a state that will host the first-in-the-nation primary offered a glimpse at Gabbard's athletic prowess and the unique way she is connecting with voters.

This particular plunge was Gabbard's attempt at bringing awareness to the opioid crisis with Chuck Rosa, the father of Ultimate Fighting Championship fighter Charles Rosa. The two met after a town hall in Hampton, New Hampshire, and he invited her to brave the waves. Rosa lost two children to accidental drug overdoses and said that every morning for the past 15 years, he jumps into the water to remember his sons, Vincent and Domenic, whose ashes were spread in the water.

"I felt really really humbled and honored to be able to hold his hand as we went ahead and plunged in the ocean, it was windy It was cold it was raining, but to bring attention to the loss that he and his family have gone through it so many families across New Hampshire and across the country have gone through was a real honor," Gabbard told ABC News.

Rosa called the presidential candidate "special" and said he felt "honored" by the experience.

" I hope that we all had as good of a time as you can have going into the freezing cold water," he said.

Over the past few weeks, Gabbard has blended her passion for sports into a form of retail politics and a direct appeal to voters.

In late December, Gabbard attended her first ever NBA game with actor Donnie Wahlberg as a guest of Boston Celtics star player Enes Kanter. She also took in some college football earlier in the year with the family of University of Alabama Crimson Tide star quarterback and NFL prospect Tua Tagovailoa. Gabbard hired Tagovailoa's aunt when she was elected to the Hawaii House of Representatives in 2002.

Gabbard has also studied Taekwondo, Tai Chi, and Filipino stick fighting, jujitsu and capoeira. She has been a guest on UFC color commentator and podcast host Joe Rogan's show "Joe Rogan Experience" three times since September 2018. On the campaign trail, voters often say they were introduced to the congresswoman through the show which has also featured other 2020 candidates.

Gabbard who is also a major in the Hawaiian Army National Guard has posted several high intensity interval training videos on social media.

The Hawaii congresswoman assisted Weili Zhang, UFC Women's Strawweight Champion in returning to America after several visa issues. After the champion UFC fighter's travel visa was denied. With Gabbard's help Zhang made it into the U.S. and the two women went sparring in a MMA gym in Boston.

Sports is in her blood. Her father moved to Hawaii in 1977 and became a tennis instructor at a local resort. Gabbard spent years as a youth practicing capoeira, a Brazilian martial arts that blends dance, music and acrobatics which dates back to slavery in Brazil.

"I've loved MMA mixed martial arts throughout my life, I've trained in different martial arts I've loved surfing throughout my life," she said. " And so really the things that we're doing are things that I enjoy doing and have enjoyed for a long time and it's, it's fantastic to be able to to get plugged in and to be able to meet people who may not go to a political rally, but who understand and appreciate like I do."

Surfing is one of the first things she does after a long 17-hour commute home from Washington.

Several Granite State surfers first asked Gabbard to join them shortly after Thanksgiving, but after a chance encounter with the owner of Cinnamon Rainbows, a local popular surf shop, she decided to bring in the new year with a new experience.

On New Year's Day, she stood on the beach in New Hampshire clad in a wetsuit. Excitement built in the crowd that gathered around Gabbard as she put on her lobster surfing gloves, a necessity for surfing in the winter.

As she took to the 32 degree Atlantic Ocean to surf, she was joined by over 100 people both on land and in the water.

Gabbard said "going underneath is like duck diving under a wave." She said the feeling that her face was going to fall off went away after a few seconds.

However, she admits she wasn't mentally prepared for the cold.

Many locals noted that Gabbard is the only candidate they've ever seen get into the waters of New Hampshire and go surfing.

James Goodwin, one of the surfers who joined Gabbard on the beach, said that, for him, surfing is a spiritual sport and he was excited to join the congresswoman.

"I loved that she put up an invitational surf party," he said. Goodwin wanted to start the new year with a fresh clean start and felt "Tulsi gave me the opportunity to give me an inspiring option."

In the fall, Gabbard tried the waves in the Atlantic Ocean just outside of Charleston, S.C. with a group of veterans from a non-profit Warrior Surf, who found the water to be therapy from their visible and invisible wounds from war.

Gabbard, who had two deployments to Iraq and Kuwait told ABC News, "the amazing therapeutic effect that the ocean and nature has on veterans who are struggling in that transition and getting back into civilian life, dealing with different elements of post traumatic stress and finding freedom and peace at a release by going out and battling the waves in the ocean then realizing that you will lose every time."

Gabbard when asked by ABC News, confirmed she's a better surfer than snowboarder, but she goes " snowboarding when we can't surf. She isn't the only sporty presidential candidate.

Criticism of her fitness routines aside, the water will always be her first love.

Her husband, Abraham Williams, who is often by her side, joined her in the water on recent outings. For the couple, surfing has a special meaning, it was on a surfboard in Hawaii's South Shore, that Williams proposed to Gabbard.

After coming out of the cold New Hampshire water, Williams was asked who was the better surfer in the family. He smiled and then said out of earshot of his wife, "she's the better surfer."
Report a correction or typo
Related topics:
abc newsnational
Copyright © 2020 ABC News Internet Ventures.
More Videos
From CNN Newsource affiliates
TOP STORIES