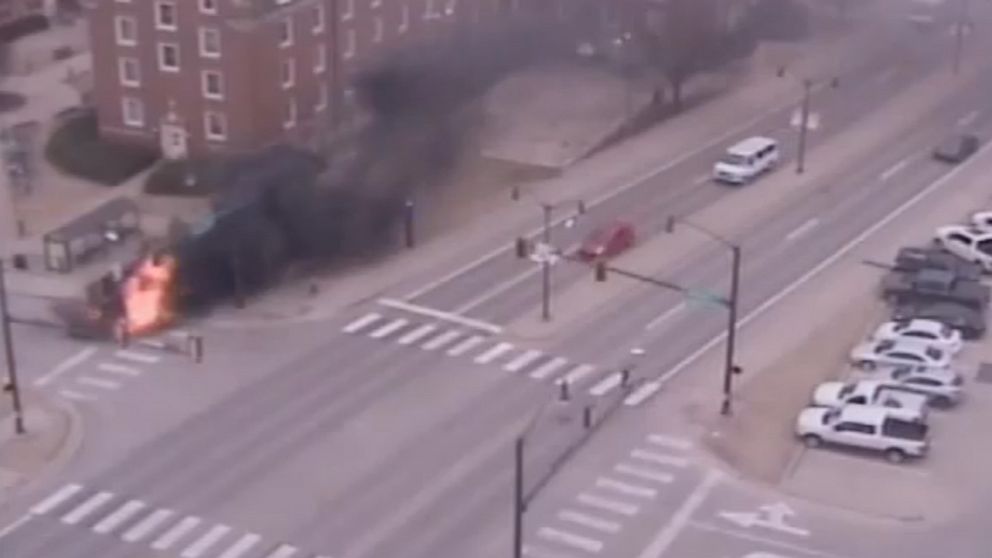 ABCNews
By JULIA JACOBO
An Oklahoma State University employee is being credited for saving a driver's life after the man suffered a medical emergency and crashed his truck, which quickly caught fire and trapped him inside.

Kyle Waters, a senior athletic director of facilities and operations for the university, was in a conference room on the campus in Stillwater on Monday morning when he witnessed the truck crash into two cars before hitting a traffic control box, according to a press release from OSU.

Right before the truck stopped, the driver's foot landed on the gas pedal, causing smoke to pour from the tires, the school said.

The man's blood sugar had plummeted, causing him to pass out, ABC Tulsa affiliate KTUL reported.

Waters then ran downstairs and across the street and watched as the truck's tires kept moving and white smoke turned to black smoke and then flames, he told KTUL. He and other bystanders were afraid the truck would blow up with the driver still inside.

"If you see a car get pulverized and tires literally ripped to shreds and in flames, and you're that close, you're like, 'Oh, is this going to explode?'" OSU student Ryan Novozinsky told KTUL.

Waters then grabbed a landscaping brick and threw it through a window, which woke up the unconscious driver and allowed Waters to pull him out, he said.

The accident report from the crash states that Waters possible saved the driver from serious injury or death, prompting OSU Police Chief Leon Jones to present Waters with a commendation on Tuesday.

"After witnessing the accident and seeing flames erupt from the truck, Kyle Waters, without fear for his own safety, removed the driver from the truck and to safety until LifeNet arrived to render aid," Jones said. "He is one of the reasons why Oklahoma State University and Stillwater is one of the greatest communities to live in."

While Waters denies his new hero status, he said he was thinking about his best friend, who was saved by a passerby in Houston when he suffered a heart attack while driving.

"That's what I was thinking when I noticed someone was in the car," he said, according to the OSU. "A passerby saved his life with CPR, so I will always try to lend a hand when I can."

The driver who suffered the medical emergency and the occupants of the other cars involved in the accident were not hurt, KTUL reported.