US further restricts air travel to Cuba to increase pressure 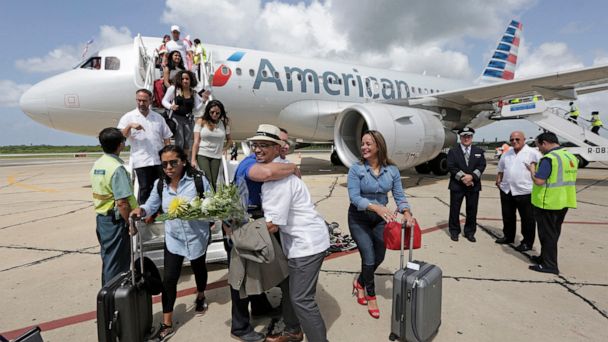 President Donald Trump is further tightening his administration's pressure campaign against Cuba as it unravels the historic opening implemented by his predecessor, Barack Obama.

Secretary of State Mike Pompeo announced Friday that all public charter flights to Cuba have been suspended, except for those to Havana -- the latest move to cut off American travel to the island country.

In October, the administration banned commercial air travel to Cuban cities except Havana. Charter flights open to the public had expanded as a way around that, although it is a more expensive alternative.

The ban is meant to "further restrict the Cuban regime's ability to obtain revenue," Pompeo said in the statement, accusing the Cuban government of using those funds to repress its people and support Venezuela President Nicolas Maduro.

But critics decried the move as a punishment for Cuban Americans traveling back to visit family, saying the move could actually put more money in the Cuban government's coffers by forcing folks to use Cuban state-owned airliners -- like Cubana de Aviacion -- to fly within the country.

"This is heartbreakingly cruel. Cuban families now cannot travel to see their loved ones," said Engage Cuba, a nonprofit coalition of private companies and organizations advocating for the end of the U.S. embargo, in a tweet. "Just tragic."

The coalition added in a separate Tweet to Pompeo, "We have now have three years of the Trump administration, how have the lives of the Cuban people been concretely improved by their policy?"

Operators will be given 60 days to discontinue their flights, according to Pompeo, and after that, the U.S. Department of Transportation will implement a cap on the number of public charter flights permitted.

It's the latest in a series of steps to impose economic pressure on Havana and limit American travel. Before the commercial airline ban, the administration banned cruise ships, along with private yachts, fishing boats and other similar vessels, from docking in Cuban ports last June.

On the same day, the administration announced a ban on people-to-people exchanges. These cultural and educational tours were one of the categories Americans had been permitted to travel to Cuba on for decades, provided that they file for and receive permission ahead of time.

The ban is a step further than the restrictions that were in place before Obama moved to repair relations with Cuba and made it easier for U.S. citizens to travel there by not requiring advanced permission.

Eleven other categories of travel are still permitted, including other cultural exchanges -- like those taken by university groups -- along with travel to see family members or to focus on humanitarian projects, religious activities, public performances, journalism or official U.S. government business.

The U.S. embassy in Havana also operates with a skeleton staff at this point after the Trump administration ordered the majority of U.S. diplomats to depart back in September 2017, citing the still unsolved health problems that about two dozen officials suffered.
Report a correction or typo
Related topics:
abc newsnational
Copyright © 2020 ABC News Internet Ventures.
More Videos
From CNN Newsource affiliates
TOP STORIES