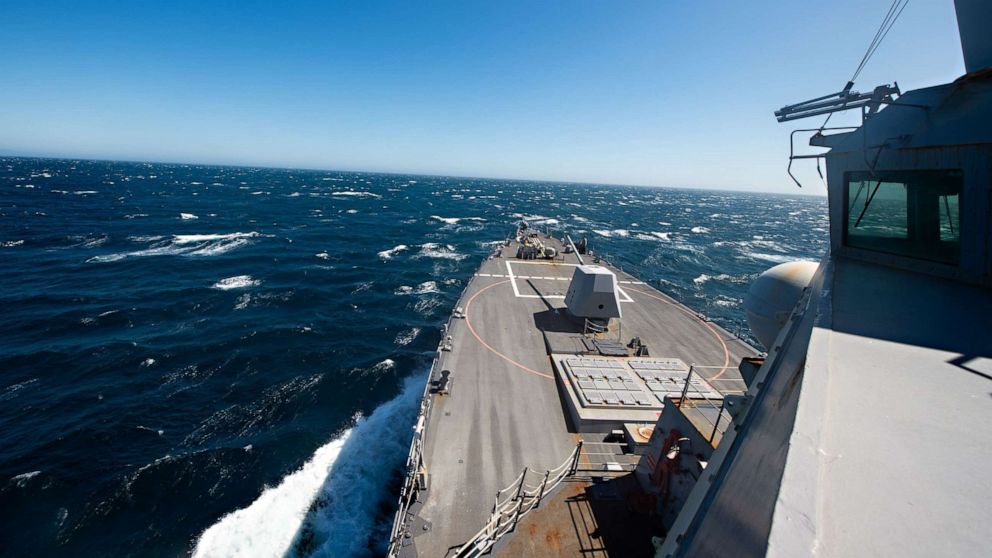 ABCNews
By ELIZABETH MCLAUGHLIN
American and Russian Navy ships narrowly avoided collision after the U.S. destroyer was "aggressively approached" by a Russian spy ship in the Northern Arabian Sea, according to the U.S. Navy's Fifth Fleet.

In video released by Fifth Fleet on Friday, the Russian intelligence collection ship, the Ivan Khurs, can be seen approaching the U.S. Navy destroyer USS Farragut on Thursday, coming within 60 yards of the American ship's stern, a U.S. official told ABC News.

"Due to their speed and rate of closure, they would have gotten too close to [the] Farragut, even possibly colliding if they had been allowed to continue," the official said of the Ivan Khurs' actions.

In response, the Farragut "sounded five short blasts, the international maritime signal for danger of a collision, and requested the Russian ship alter course in accordance with international rules of the road," Fifth Fleet said in a statement. The Russian ship "initially refused" but then "ultimately altered course," allowing the two ships to separate and narrowly avoid collision.

"While the Russian ship took action, the initial delay in complying with international rules while it was making an aggressive approach increased the risk of collision," the Fifth Fleet statement said. "The U.S. Navy continues to remain vigilant and is trained to act in a professional manner."

According to a statement on a Russian government website, Defense Secretary Mark Esper spoke with his Russian counterpart on Friday -- but the readout makes no mention of the close encounter at sea, only saying that the two leaders discussed the situation in the Middle East.

The USS Chancellorsville was operating in the Philippine Sea when the Russian ship DD572 "maneuvered from behind and to the right of the Chancellorsville, accelerated, and closed to an unsafe distance" of between 50 and 100 feet.

Russia's Pacific Fleet argued it was the American ship that changed course without warning, forcing the Russian ship to execute an emergency maneuver to avoid collision.

The Russian statement also said that the ship, the Admiral Vinogradov, broadcast a protest on an international frequency to the U.S. ship, telling it that its actions were unacceptable.
Report a correction or typo
Related topics:
abc newsnational
Copyright © 2020 ABC News Internet Ventures.
More Videos
From CNN Newsource affiliates
TOP STORIES