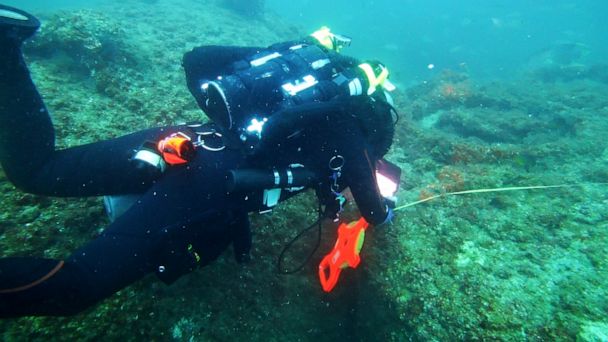 ABCNews
By ELLA TORRES
After nearly 95 years, explorers believe they have discovered the SS Cotopaxi, a ship that vanished near the area known as the Bermuda Triangle in 1925.

The steam-powered bulk carrier set sail from Charleston, South Carolina, to Havana, Cuba, on Nov. 29, 1925 before disappearing on the way.

Carrying 32 passengers, no bodies have been recovered, and what happened in the shipwreck, or the whereabouts of it, were unknown -- until now.

In the summer of 2019, Michael Barnette went on a dive and believed he came across the wreckage of the Cotopaxi off the coast of St. Augustine, Florida.

Barnette said that while he didn't go specifically looking for the ship, he regularly goes out to sea to help identify local wrecks.

He spotted what is believed to be the Cotopaxi in an area known as the Bear Wreck.

"I felt confident this was the Cotopaxi, given it was the only large steamship in the area," Barnette said in a statement to ABC News.

He enlisted the help of a historian and other research agencies to be sure.

Barnette spoke with British historian Guy Walters, who subsequently combed through archival ship records and learned that the Cotopaxi had sent out wireless distress signals on Dec. 1, 1925 -- two days after it left from Charleston. The signals were picked up in Jacksonville, Florida, around the area of a shipwreck that was found some 35 years ago.

Barnette went diving around the wreck but did not come up with any evidence to prove it was the ship.

But after working with the St. Augustine Lighthouse and Maritime Museum, a nonprofit organization dedicated to researching and preserving the maritime history of the region, two of the group's leading maritime archaeologists went back to the wreckage with Barnette to look for more clues.

Further research corroborated the wreck's location to where the distress signals were sent out, according to Barnette, leading him to believe he had finally uncovered the Cotopaxi.

He called the discovery "incredibly exciting."

"I've done a countless number of shipwreck dives," he said, "but this one truly stood out."