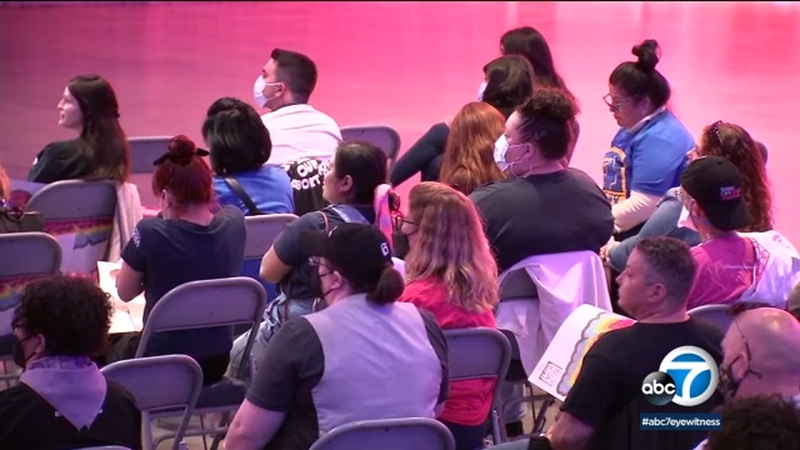 LONG BEACH, Calif. (KABC) -- Activists gathered in Long Beach Wednesday night for a volunteer mobilization to keep fighting for abortion rights, but they also took time to address another topic at the forefront of national conversation.

The group of advocates, lawmakers and volunteers were there to focus on reproductive rights, but the call for gun reform was clearly on their minds as they held a moment of silence for the 19 children and two teachers who were killed in a Texas elementary school shooting earlier this week.

"The same group of men, predominantly, want to control women's bodies but have no interest in controlling guns and what happens to school kids...We should be ashamed of this moment," said Long Beach Mayor Robert Garcia.

California Attorney General Rob Bonta is leading the charge to hold gun manufacturers accountable, allowing citizens to sue. He said it's time for Washington to take action to make the community safer.

Hours after a deadly elementary school shooting in Texas, California senators on Tuesday approved giving people the power to sue those who traffic in illegal firearms, mimicking a Texas law that is intended to deter abortions.

Many who turned out on Wednesday said whether it's about abortion rights or gun reform, it ultimately comes down to saving lives.

"I want to tell you quality of life is being put at risk because of decisions that will be, can be made by not only Supreme Court justices, but by state legislators all over this country," said Rep. Maxine Waters.

Oklahoma is one of the latest states to pass a new law that bans abortions from fertilization, with few exceptions. It also allows private citizens to sue abortion providers.

Oklahoma Gov. Kevin Stitt on Wednesday signed into law the nation's strictest abortion ban, making the state the first in the nation to effectively end availability of the procedure.