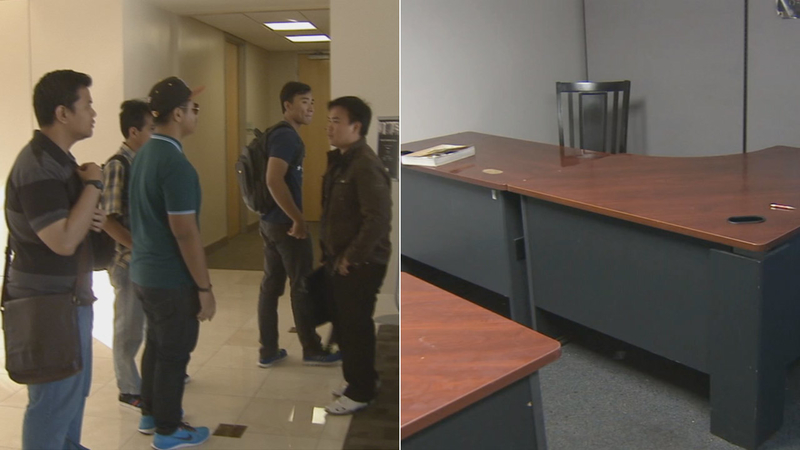 The students met with a representative from the Federal Aviation Administration and the Department of Homeland Security to see if any crime has been committed by the school that could threaten national security. The meeting at the FAA office in Long Beach was set up because there are very rigorous requirements for flight schools that accept foreign students. Federal officials are concerned about the school's operator.

The students say they are caught in the middle of a mess.

Two dozen students signed up in Indonesia for a six-month course with an operation called Accessible Aviation International in Long Beach, as well as California Flight Center, to become pilots.

On Thursday, Eyewitness News found the offices of the flight school empty, with a pricy flight simulator left behind. The owner of the building said the school's operator, Mac Patel, left, unable to pay any more rent.

The students say they have been scammed, and worse.

"We don't know how to get help in this foreign country," said Jackie Maryline, one of the students.

Their individual fees they paid for housing, insurance and instruction are expensive.

Owner Mac Patel told Eyewitness News by phone that he is offering a partial refund. Students say Patel is not communicating with them.

"I have been emailing them and calling them that we want to have a meeting with me and the rest of the students, and there's no news from them," said Maryline.

The students describe troubles that began just after a plane crash in Agua Dulce in June. A student was a passenger getting a lesson in the plane. The student, Feranita Gusnaidy, survived and was transported to the Henry Mayo hospital. Thursday, she told Eyewitness News the school was supposed to provide insurance, but didn't.

"I had broken skin on my forehead, fractured ribs and broken leg and broken jaws," said Gusnaidy. "But the owner said 'If you want us to take care of the insurance, just talk to my lawyer.'"

They worry about eviction from their student housing next. They have notices from a downtown L.A. complex that rent is due.

Then there's the question of their student visa status: If their school no longer exists, will they have to leave the country with no resolution?

Federal officials are looking into whether the operator has committed any violations of the law. The students say they feel better after the meeting but their future is still very uncertain.